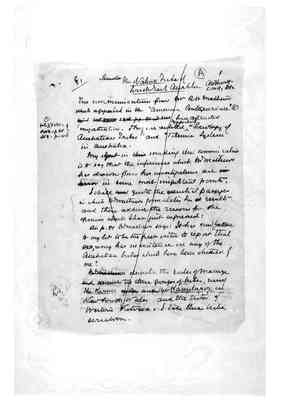 Two communications from Mr R H Mathews which appeared in the "American Antiquarian" (1) have attracted my attention. They are entitled ^respectively "Sociology of Australian Tribes" and "Totemic System in Australia.

My object in ['this' crossed out] making this communication is to say that the inferinces which Mr Mathews has drawn from his investigations are ['in' crossed out] ['error' crossed out] erroneous in some most important points.

I shall ['now' crossed out] quote the essential passages in which Mr Mathews formulates his results and then adduce the reasons for the opinion which I have just expressed:

At p. 81 Mr Mathews says: It has now fallen to my [let?] to be the first writer to report that exogamy has no existence in any of the Australian tribes which have been studied by me".

['Mr Mathews' crossed out] He then describes the rules of Marriage and descent in three groups of tribes, namely the Kurnu ['of the' crossed out] and the Kanularor in New South Wales, and the tribes of Western Victoria. I take these tribes seriation. 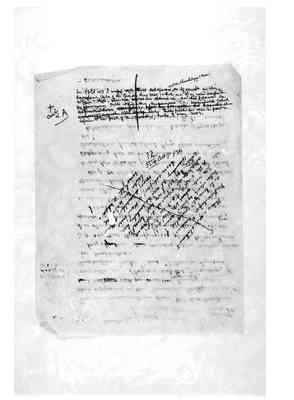 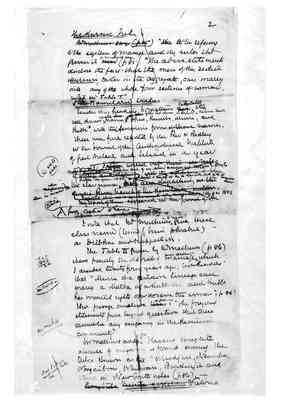 Under this heading Mr Mathews ['gives' crossed out] ^tabulates the well known male names of the sub-classes, or [........ a ...... ......] thus, Kumbo, Murri, and Kubbi, with their feminine forms ['of those names' crossed out]. These were further reported by the Rev W. Ridley in the Journal of the Anthropological Institute of Great Britain and Island in the year

I note that Mr Mathews ^[....] gives these class names (termed by him [pluatries?]) as Dilbhai and Kuppathin.

The Table II given by Mr Mathews (p 86) shows precicely the old rule of marriage ^and descent which I described twenty four years ago, but he adds that "Murri of a certain lineage can marry a Matha [...] a Kubbitha and Kubbi has marital rights over the same two women" (p 86) This passage concludes ['thus' crossed out] as follows: "the foregoing statements prove beyond question that there cannot be any exogamy in the Kamilaroi community."

Mr Mathews adds ^to this "The same complete absence of exogamy is found among the tribes known as the "Wiradjuri, Neumba, Wongaibon, Waitwan, Barkinjie and others in New South Wales (p 86) -

This I shall deal with later on. 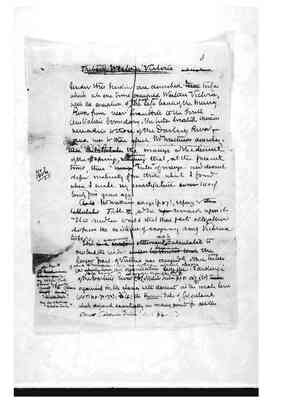 Tribes of Western Victoria ['and co.....' crossed out]

Under this heading are described tribes which at one time occupied Western Victoria, with the exception of ^that part on the left bank of the Murray River from near [..ault..] to the south Australian boundary. The tribes located therein were akin to those of the Darling River - and not to those which Mr Mathews describes. [..........] the marriages and the descents of the offspring, ['showing' crossed out] shows that, at the present time, these ['marriage' crossed out] rules of marriage and descent differ materially from those which I found when I made my investigation nearly twenty five years ago

['As to' crossed out] Mr Mathews says (p 87), referring to ['the' crossed out] ['tabulature' crossed out] Table III, and the ['upon' crossed out] remarks upon it "It is needless to add that these facts altogether [d......] the existence of exogamy among Victorian tribes.

This a surprising statement ^which is calculated to mislead the reader ['unless he knows that' crossed out] because the larger part of Victoria was occupied by other tribes of which Mr Mathews takes no notice - and which [......] (a) [.... ....] an organisation like the Barkinji of the Darling River [..........] ['(b)' crossed out] (Native Tribes pp 51-52) (b) ['Tribes' crossed out] organised in two classes with descent in the male line (N T. pp. 70-72); ['to' crossed out] and (c) the Kurnai tribe of Gippsland which differed essentially in many points from all the other Victorian Tribes (N. T pp. ). 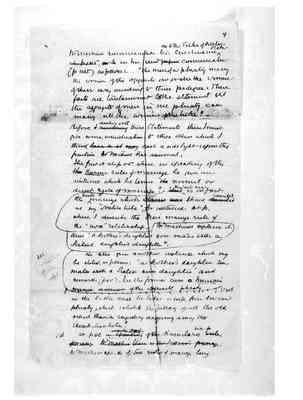 Mr Mathews summarises his conclusions ^as to the tribe of [.......] ['at p 145' crossed out] in his [....] ['paper' crossed out] communication (p 145) as follows: "The man of a phratry marry the woman of the opposite one, or else the woman of their own, according to their pedigree. These facts are tantamount to the statement that the aggregate of men in the phratry can marry all the women of the tribe."

Before ['considering' crossed out] dealing with these Statements ['there' crossed out] I must give some consideration to three others which I think cast a side light upon the practise Mr Mathews has assumed.

He also gives another instance which may be stated as follows: "a mother's daughters son mates with a Sisters sons daughter and remarks (p 85). In the former case a humari marries a woman of the opposite phratry, but in the latter case he takes a wife from his own phratry, which [contradicts?] the fallacy of all the old school theories respecting exogamy among the Australian tribes".