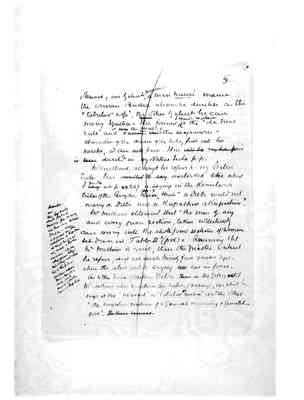 observed; one by which ^for instance a man [humi?] marries the woman Butha whome he describes as the "tabular wife", the other by which he can marry Ipatha. The former ^I must explain is the "old time rule" and ['carried out' crossed out] is ['was' crossed out] the [...ue] of the exogamous character of the division of the tribe, first into two moieties, and then into four. This ['will be may be found' crossed out] is ['seen' crossed out] described in my Native Tribes p. p.

Mr Mathews statement that "the men of any and every given section, taken collectively can marry into the whole form sections of women set down in Table II" (p 86). Assuming that Mr Mathews is correct, then the practice to which he refers, did not exist twenty five years ago when the [........] saying was in force.

As to the tribes of Western Victoria there is the [......] Mr Mathews also mentions the rules of marriage, one which he says is the "normal" or "tabular custom" and the other "the irregular custom of a gamatch marrying a gamatchgroup. ['He then remarks' crossed out] 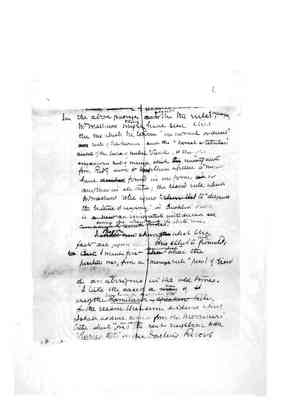 In the above passages about the rules of marriage, Mr Mathews might ^I think have seen that the one which he terms "the normal or direct" ['and' crossed out] rule of the Kurnu, and the "normal or tabular" custom of the tribes of western Victoria, is the old exogamous rule of marriage which ['the' crossed out] investigators from Ridly down to Spencer & [gillen?] and [.......] have ['described' crossed out] found in one form ['and' crossed out] or another in all tribes: the second rule which Mr mathews [relie?] upon to ['show that' crossed out] to "disprove the Existence of exogamy" in Australian Tribes is ['a new' crossed out] an innovation introduced ['in' crossed out] ['comparably recent times' crossed out] since the advent of the white race.

If an aborigine in the old times.

I take the case of a ['man' crossed out] man of one of the Kamilaror tribes having the [.........] of the ['speaking' crossed out] tribes, for the reason that some evidence which I shall adduce comes from the Merranari tribe which ^is or rather was the next neighbour to the "Kurnu tribe" in the Darling River. 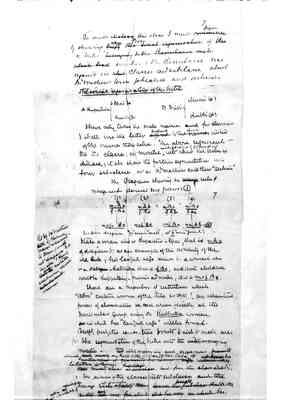 The social organisation of the tribe

I have only taken the male names and for clearness I shall use the letters prefixed ['affixed' crossed out] to ['the names' crossed out] instead of the names them selves. The above represents the two classes, or moieties ^called phratries by Mr Mathews into which the tribe is divided; it also shows the further segmentation into four sub-classes or as Mr Mathiews calls them "sections"

The diagram showing the ['marriage' crossed out] rules of marriage and descent are follows: (1)

Take a man who is Kupathin-Ipai, that is m. A a of diagram (1) as an example of the [working?] of the old rule; his lawful wife must be a woman who is a Diebi=Kubbitha that is f B d, and their children would be Kuppathin-Murri- and matha, that is m & f B c.

There are a number of restrictions which "taboo" certain women of the tribe so that by an exhaustive process of elimination we can arive finally at the particular group among the Kubbetha women ['as' crossed out] in which his "lawful wife" will be found.

[Left margin:] (1) If Mr Mathews [table?] of Kurnu marriage & descent is transposed into diagrams like the above I think ['that he' crossed out] some mistake will become apparent 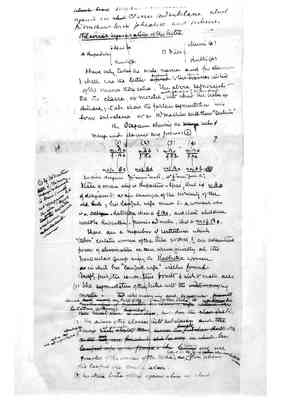 [Everything on this page except the 4 lines below is on the previous page (page 8).]

(3) In these tribes of this organisation in which 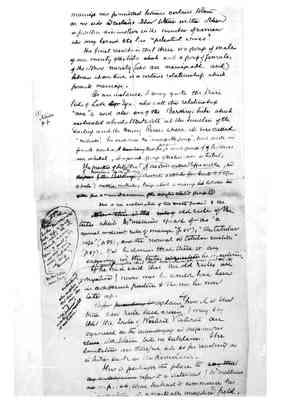 marriage was permitted between certain totems on one side and certain other totems on the other a further diminution in the number of women who may be said to be his "potential wives".

The final result is that there is a group of males of one moiety of the tribe ['which' crossed out] and a group of females of the other moiety (who are marriageable and) between whom there is a certain relationship which permits marriage.

As an instance I may quote the Dieri tribe of Lake Eyre who call this relationship "noa": and also one of the Barkinji tribes which was Created about Wentworth at the Junction of the Darling and the Murray Rivers where it was called "[methabi?]". In each case the "marriageable group", had male and female members, ['there being' crossed out] therefore ^comprised a male group of ['of' crossed out] brothers own or tribal, and a female group of sisters own or tribal.

The practice of betrothal called by the Dieri tippa malku, and by [Mimbaco?] in the ^[lower?] Darling ['the prac by the Barkinji (Baccali subtribe from [....] to [.....]' crossed out] 14 miles) methia-methalu, brings about a marriage ['bet' crossed out] between a man and a woman of the respective relative group. (1)

['Now this is the rule of' crossed out] This is an explanation of the results [f....d] by the old rule of the tribes which Mr Mathews speaks of as "a normal or direct rule of marriage" (p 85), "the tabular wife" (p 86), and the "normal or tabular custom" (p 87). that he denies that there is any exogamy in the tribes ['in question' crossed out] he mentiones. and implies that that both rules are of the same [authority?] *

If he had said that the old rules are negatived by newer ones he would have been in a different position to the one he now takes up.

Before ['proceding to' crossed out] explain^ing how it is that these new rule have arisen, I may say that the tribes of Western Victoria are organised in the intermarrying and exogamous classes, with totems but no subclasses. The limitations are therefore not so far reaching as in tribes such as the Kamilaror.