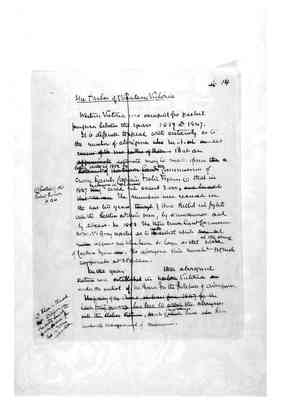 The Tribes of Western Victoria

Western Victoria was occupied for [pastoral?] purposes between the years 1837 and 1847.

In the year three aboriginal [Sl..t..s] were established in western Victoria ['an' crossed out] under the control of the Board For the Protection of Aborigines. 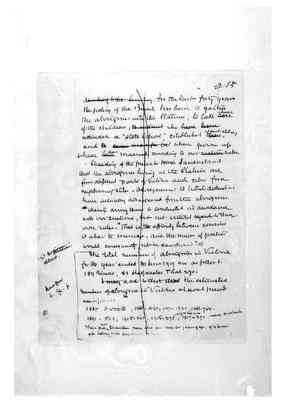 Speaking of the present time Sundusland that the aborigines living at the [Slat...] are from different parts of Victoria and also from neighbouring states All references to tribal destruction have actually disappeared from the aborigines.

Marriage among them is conducted in accordance with our customs, but not without regard to their own rules. "That is, the affinity between ceremonies is [ab...] to marriage, and the union of parties would consequently not be sanctioned". (1) 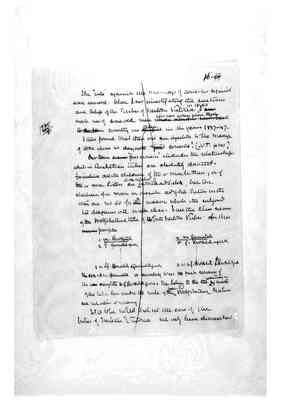 The "rule" against the marriage of cousins required some remark. When I was investigating the customs and beliefs of the Tribes of Western Victoria ^in 1885 I made use of some old men who were young when their ['whose memory went back' crossed out] ['to the time' crossed out] country was ['occupied' crossed out] taken in the years 1837-47.

I then found that there was an objection to the marriage of those whom we designate "['first' crossed out] cousins". (N. T. p 241)

Our term ['cousin' crossed out] "first cousin" includes two relationships which in Australian tribes are absolutely distinct. For instance all the children of two or more brothers, or of two or more Sisters are ^in the relation of brothers and sisters, but the children of a man on one side and of his Sister on the other are not so for ['the' crossed out] a reason which the [sub....d] two diagrams will make clear. I use the class names of the Wobjoballuk tribe of North western Victoria for this purpose

The son- 3. m. Gamutch is according to us the first cousin of the daughter 6 f Krokitchgurk. The belong to the two ^intermarrying segments of the tribe but under the rule of the ^tribe, if Woltovalluk Nation are not [allowed?] to marry 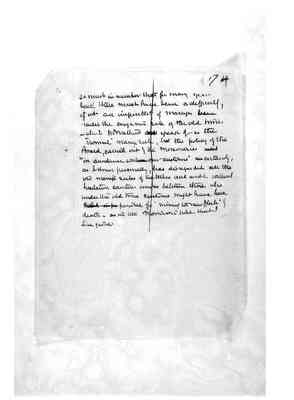 so much in number that for many years back there must have been a difficulty, if not an impossibility of marriages ['bene' crossed out] under the exogamic rule of the old times - which Mr Mathews speaks of as the "normal" marriage rule, but the policy of the Board, carried out by the Mersinaries "in accordance with our customs" certainly, as I know personally, has disregarded all the old marriage rules of the tribes and would without hesitation sanction unions between those who under the old time customs might have been ['Killed in pu' crossed out] punished for "mixing too near flesh" by death - as in the Morritari tribe which I have quoted 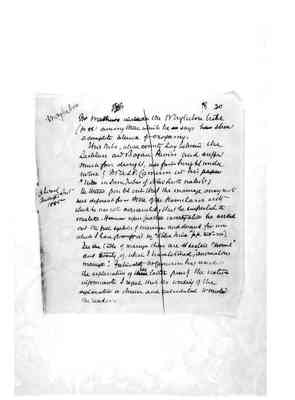 Mr Mathews includes the Wongtubon tribe (p 86) among those which he says [shun?] a complete absence of exogamy.

This tribe, whose county lay between the Lachlan and Bogan Rivers and suffer much for drough, was first brought under notice by Mr A L P. Cameron in his ['paper' crossed out] "Notes on some tribes of New south wales (1)

He therein pointed out that the marriage arrangements were different from those of the Kamilaroi with which he was well acquainted, that he suspected a mistake. However upon further investigation he worked out the full system of marriage and descents for me which I have given in my "Native Tribes" pp. 214-216).

In the table of marriage there are sixteen "normal" and twenty, of what I have termed, "anomalous marriages". Fortunately Mr Cameron has recorded the explanation of ['these' crossed out] the latter group by the native informants. I repet that the wording of the explanation is obscure and calculated to [m.....] the reader.