XM459 Corrections for Journal of the Anthropological Society article 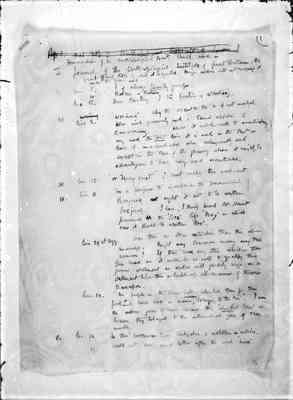 Transactions of the Anthropological Society should read -

I Journal of the Anthropological Institute of Great Britain: the present official title by which it is quoted. Foreign workers will not organize it under the name used.

III line 2. "[warning?]". Why the account on the [..] if not [marked?] When word previously used. Same applies to Bunworung. Would it not be well to accentuate every word the first time it is used in the text leave it unaccentuated when subsequently and except in the case of the glossary where it might be advantagous to have every word accentuated.

IV. line 11. For a foreigner to understand the pronounciation of Brajorak might it not to be written Brejack. I have, I think heard Mr Howitt pronounce the 'Bra' like 'bray' in whic case it should be written 'Bre'.

line 24. The people in the lower hills climbed trees for their food and hence had a name ^meaning "belonging to the trees". ? was the name given to them because they 'climbed trees' or because they belonged to the intermediate zone of Tree country. 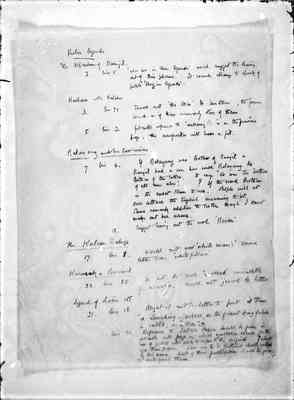 The Departure of Bunjil.

2. line 5. 'who are in these legends' would suggest the leaving out of this phrase. It sounds strange to speak of people 'being in legends'.

5 line 3. foot note reference to 'moreny ? is on the previous page. The compositor will have a fit.

Balayang and his two wives

7 line 4. If Balayang was brother of Bunjil + Bunjil had a son how could Balayang be brother of the latter. It says "He was the brother of all men also". ? If the word brother is the exact term to use. People will at once attach the English meaning to it. Same remark applies to sister though I cant make out her name.

11. Suggest leaving out the word 'Besides'.

The Kuleen Deluge 17. line 1. Would not 'white man's' sound better than 'white fellows'.

Kururak + Burimil 22 line 25. Is not the word 'mocked' unsuitable for a native. Would not 'feered' be better

31. line 18. Might it not be better to put it thus "a Laughing-jackass, as the giant king fishes is called, on a tree" etc.

line 30. Reference to Latribe Papers should be given in footnote with page on which quotation occurs for the use of people who wish to refer to the original. ? what are these papers. Some are ot be published shortly called by this name. Date of their publication should be given to distinguish them. 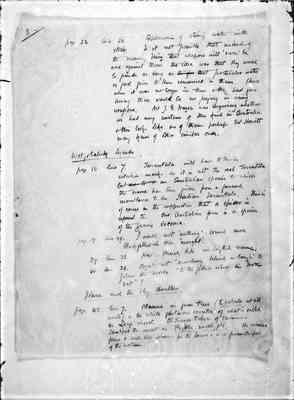 page 32 line 30. Explanation of stiring water with stick. Is it not possible that instead of the meaning being that weapons will 'never' be used against them the idea was that they would be friends so long as that particular water or ford given to them remained in them. Hence when it was no longer in them + they had gone away there would be no perjury in using weapons. Mr J. G. Frazer was enquiring whether we had any customs of this kind in Australia + this looks like one of them perhaps Mr Howitt may know of other similar ones.

Wot, obaluk Legends. page 34. line 7. Tarantula will have to be in citation marks as it is not the real Tarantula but an Australian species to which the name has been given from a fancied resemblance to the Italian Tarantula. This is of course on the supposition that a spider is referred to. Our Australian form is a species of the genus Voconia.

page 37 line 29. ? would not 'nothing' sound more blackfellowish than 'nought'.

40 line 24. Ought not 'crouching behind a bough' to follow the words "to the place where his brother sat"?

page 42. line 7. Manna or germ trees (E. rostrata at all events) is the white glutinous secretion of what is called the Lerp insect. Dr Thomas Dobson of Tasmania identified the insect as Psylla encalypti. The manna forms a seale-like covering for the larva + is a favorite food of the natives. 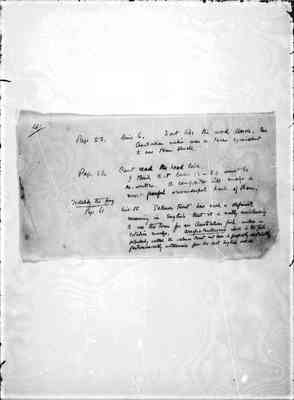 Page 52. line 6. Dont like the word Uncle. No Australian native uses a term equivalent to our term Uncle.

Page 56. Cant read the head line. I think that lines 13 - 26 must be re-written. A composite will make a most fearful + wonderful hash of them.

Tedelik the frog Page 61. line 18. 'Salmon Trout' has such a definite meaning in English that it is really misleading to use the term for an Australian fish unless in citation marks. Arripis truttaceus which is the fish popularly called the salmon trout out here is perfectly [distinguished?] gastronomically + otherwise from the real English article. 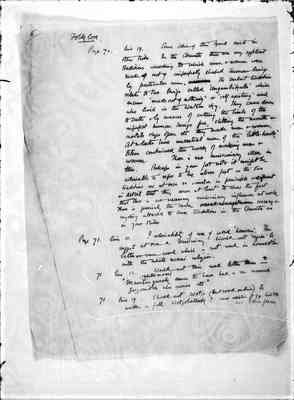 Page 70. line 19. Some idea of this kind exists in these tribes. In the Arunta there are very explicit traditions according to which men + women come made out of imperfectly shaped human beings by particular men. The earliest tradition relates to two beings called 'Ungambikula' which means 'made out of nothing' or 'self-existing' and who lived in the Western sky. They came down to earth + by means of cutting the limbs of the imperfect human beings free, slitting the mouth + nostrils + eyes open etc they made men + women. At a later time ancestral men of the 'little-hawk' totem continued the work of making men + women. There is no missionary idea in this. Perhaps in your foot note it might be advisable to refer to the above fact as the two traditions are at once so similar in principle + different in detail that they serve at least to show the fact that there is no necessary missionary influence at work. There is precisely the same secrecy + mystery attached to these traditions in the Arunta as in your tribes.

Page 71. line 10. ? advisability of use of word 'heaven'. This suggests at once a Missionary. Would not 'region' be better or some word which is not used in connection with the white man's religion.

71 line 13. Would not this read better thus "Mancin gurak (?) whether in or [...]) seems to have had a son named Sarsomitch who carried etc"

71 line 19. Should not Wotio (last word on line) be written in full Wotioballuk? same applies p 74 line 14. and other places.