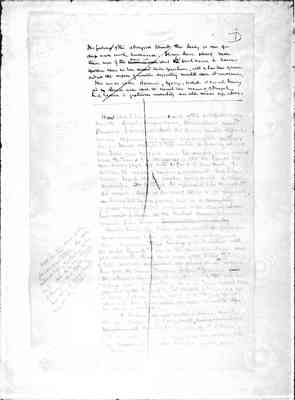 The feelings of the [??] towards the being is one of deep awe and reverance. I have stressed more than once of the [crossed out - reverance with] manner in which his secret name has been spoken when he has [??] these questions, with a low tone of voice and all the [express?] of [??] depicting mental [care?] and reverance,

This was so with Kurnai, [Nyarip?], Wolgal and coast [Murray?] and [Dirast?] area [?] the [??] the name of though had reason to gestures indicating an old man up above

From which I have personally to each of the beliefs covering [Nurite?], Bunjil, [Munjau-njaur?], [Daramubau?] and Briame I am quite clear that they all under different names represent that same supernatural [anthpo?]. being. In all cases [3 inserted words cannot read] be it represented as having at no time lived upon the earth where he [ascending?] home [??] made the "trees & ?. All [crossed out - the] agree that he taught the then living people the arts so [for?a?] they know them, from this time the making of [new fires?] & implements but I have never heard that he made mankind or even animals. [crossed out - at] Although he may be said to be [??] and [??], this in the same taht heis so magically, [word crossed out] having the same [??] but in a [crossed out - completely] a greater degree to the medicine men claimed [two words crossed out] [crossed out - have received from Bunjil] and the [??] [??] to have seemed from him. [crossed out - Combining this with the only] 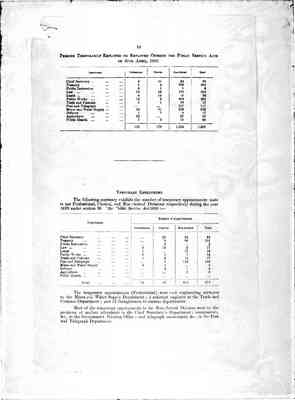 [Typed text from a report] 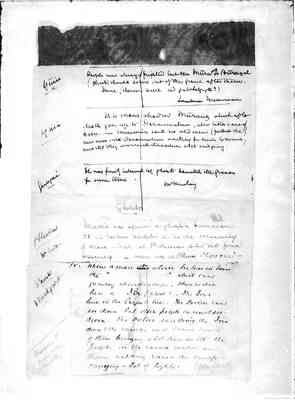 People were always frightened lest the Mūrang or Būragal (ghosts) should come out of the ground after them. Imre (Berin- to die and gula belonging to ?) [crossed out - Ienbin] Merriman

Yūin It is mans shadow Mūrang which after death goes up to Darumulun, who takes care of him - Merriman said his old men (fathers +c) were now with Daramulun waiting for him to come, and that they amused themselves with singing.

[Left margin] [Gringai?] It was firmly believed that ghosts haunted the graves for some time. No [??]

[Left margin] Port Stevens [underlined] Mr Scott Muirie was spirit and ghost. I am aware that in Eastern Australia it has the meaning of man - but at Port Stevens under the former meaning - man was at Port Stevens. "Coo-rees" -

[Left margin} Ghosts [underlined] {{Wiradjuri]] 18. When a man [crossed out - was] is alive he has in him the [same as above a man is alive] which can go away when he sleeps. When he dies he is a {Jīr?] (ghost). The [Jirs?] live in the larger trees. The Doctors can see them but other people cannot see them. The Doctors can bring the[ Jirs?] down to the camps and I have heard of them bringing a lot then so that the people in the camp could see them walking round this camp - carrying a lot of lights. (follow with 8D here)

Last edit 12 days ago by ALourie 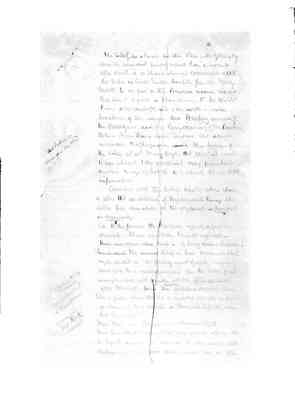 The belief in a land on the oher side of the sky where the immaterial part of man has a home after death is as I have shown common to all the tribes in South Eastern Australia from the Murray Mouth to as far as the Bunan/Bunnan ceremonies reach.

This limit is fixed as I have shown to the Hunter River on the coast (1) and to the northern and western boundaries of the ~ [crossed out - are] Burbung ceremony of the Wiradjuri and the Bora ceremony of the Kamilaroi tribe. But there is some evidence that also included Chipara. [crossed out - and] The beliefs of the tribes about Maryborough that the dead went to an island to the northward many pointed to another [image?] of beliefs and which I have little information.

[Left margin note] Attributes - where did the dead go to ?

Connected with the belief refered to above there is also that in existence of Supernatural beings who either had their abode in the sky country permanently [underlined] 2 or occassionally.

As to the former the Kurnai offer a good example. I have referred to the [Mirarti?] as ghosts. - [crossed out - There are these about] Next is a being called [Brewire?] [crossed out - He is [??]] The [word crossed out] belief in him represents which may be [chanted?] as the [combining?] most of evil myths, and yet he is anthropomorphic for he takes [??] and even if he [does?] [unite?] [?people?] at the [Gūnyerui?] (1) of the [Mirarti?]. [crossed out - He] [Tabulated?] find the time chart which I have given shows that he is credited with what we know as [??]. He is described as "being able to go any where like the wind."

Last edit 23 days ago by ALourie 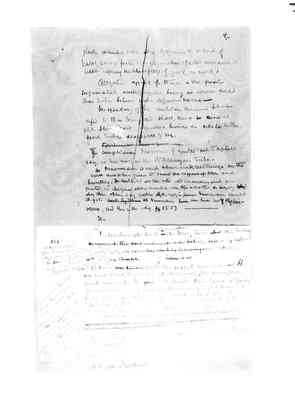 part ascended to the sky by means of a end of [??] [smir?] [father?] in the sky - where [he?] still remains without infleuncing the black fellow for good or evil.

Altogether apart from these is the great supernatural anthropomorpic being in whom all these tribes believe in [??] different names -

In speaking of the [??] in ceremoines I have referred to this being and shall now record what I have heard [?spective?] him as relates to the several tribes dealt with by me.

[Crossed out - I [??] in his work in] for completeness I [??] by [??] [me? or until?] [Jap?] says in his name in the Narrinyeri tribe. [Murrundiri?] is said to have made all things on the earth and to have given to men the weapons of war and hunting. He instituted all the rites and ceremonies which are practised by the aborigines, whether connected with life or death as on enqiring [crossed out Why?] why these [and?] here to say certain the reply is, because Murrunderi commanded