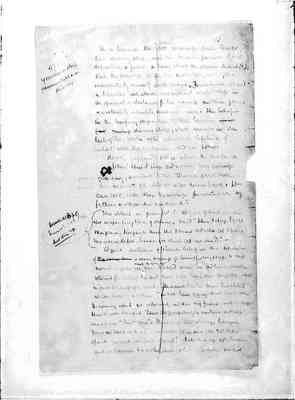 It is believed tha[t] a man's murup could leave him during sleep, and the exact period of departure is fixed as being when the sleeper snored (1). But the murup might be sent away if the individual by means of evil [woke?]. For instance when a hunter out alone in ?? went to sleep in the open at a distance from the camp and then fell a victim to a hostile medicine man. Then belief in the [temporary?] departure of the human [crossed out - spirit] [word crossed out] murup during sleep, still survive in the last of the Kulin after a almost a lifetime of combat with the whiteman and his elders.

Berak explained to me about this matter as follows "when I sleep and snore my murup goes away sometimes to the [Tharan galk bek?], but I cannot get into it and come back. It can talk with other murup for instance my fathers and others who are dead:

This statement was [para?] by that of one of the Kurnai who in speaking to me of dreama said "When I sleep I go to other places, I see people there that I know and others that I have not seen before, I even see those that are dead." -

account he gave me, [??] [??] ago of what happened when he and his comrades returned from taking his sick sonto the Melbourne Hospital, when

in fact he shortly after died. [crossed out - He said] I note down his statement at the time as follows. "We had been crying about him all the evening after we returned and then my friend went to sleep. When he woke he said "I saw that poor fellow, he was here and he

said to me "Stand there". There were two strings hanging down and he said to me we will go up them, and will be afraid, you will not fall down! I climbed up after him and we came to a hole, where a lot of people were 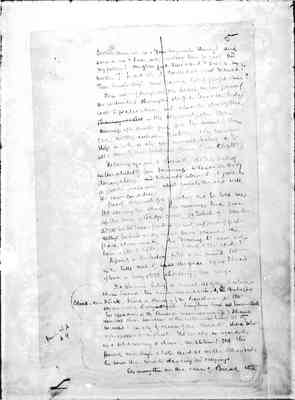 looking down at us. Your boy went through and said to me " I am only waiting here for you and my father." One of the girls there said "How is my mother?" I said why it looks like our Minna!" Then I went through and saw a lot of people there."

This [one?] may brings out the belief in our powere of the individual through sleep to leave the body and to go elsewhere, but also the idea of the [crossed out - Tharangalk-bek] - the sky country, where the murup after death goes to. The ascent by the cord and the entrance into the sky country through a hole is also an unusual belief as for all is [??] the medicine men (see Chpter)

Returning again to [Death?] and the belief in the ability of his murup to leave the body during sleep [crossed out - and] to wander abroad, [??] gives us a further instance which connects the old with the new condition.

Heard a [??] of a [??] and he told me that during his sleep his murup had gone up the valley of Badger Creek, (a tributary of the Yarra river) and that be to their found [??] [??] full of [greed?]. Although he had many times since searched the place when awake the "murup had never yet been able to take him to and to the [??]."

So firmly is the belief fixed in the mind that in the latter end of [ letters crossed out] the year again I heard of him a being still [crossed out - th] ordering of the [reef?].

[Left margin note bracketed to following paragraph] [??] at A p4

The Kurnai belief is much that of the Kulin. I have heard two names applied to it, [crossed out - by this] the Brabra (p-) Blimte-da-Nŭrk. Nŭrk is cloud. of the Krauatun 9p) the sky was called [Bring-nurt?], "bring" being [bone?] and nurt - cloud.

In speaking of the Birrark medicine men (p) I have described them as [??] and the tribesmen's belief that they ascended to the sky by means of the mrarts, [crossed out - that is] who might be spoken of as ghosts. That the sky was regarded as a solid covering is shown by the statement that the Birrark went through a hole and that on the other side he saw the mrarts dancing and singing.

As [crossed out - any the] in the case of Berak the 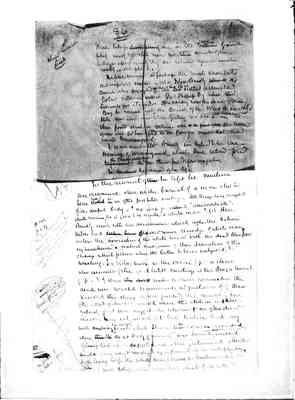 The best known and perhaps the most characteristic and important [instance?] is that of John Buckly [crossed out - who a] a convict who escaped [that is?] sec 18- from the [crossed out - at] settlment attempted. [Colony?] [??] within Port Phillip Bay where [crossed out - the] Sorrento now stands. After wandering round the shore of the [crossed out - ??] Bay he came into the country of the Wudthaurung (p) tribe some where near when Geelong now stands Wudthaurung was then found almost in [extremis?] with [crossed out - to the part of this] the broken spear which had been placed in the grave of a man earlier dead named [Murrangurk?].

It is our actions this Buckly/John Buckly was believed to be the murup of [Murrangurk?] which had returned from [crossed out - ??] the [Thaurngalkbek?] and [was?] their [crossed out - from] [Ngamajet]. [crossed out - In the case] he [accounted?] of his life.

In the account of [crossed out - the] his life he mentions an occurrence when in the burial of a man who had been [corssed out - killed] speared at one of the special tribal meetinggs. All things being completed for the [?ful?] body, "one word was [crossed out - uttered] "animadiate", which means, he is fine to be made a white man". (1) Here Buckly/John Buckly must relate an occurrence which after the Native tribes had [crossed out - ?? because] [blamed?] some kinship of white men unless the association of the white man with the dead black fellow may have been "a natural consequence of their observation of the change which [??] where the latter were subjected to washing. In tribes such as the Dieri (p) or those who were received for the great tribal meetings at the Bunya Mountains (p-) by [whom?] [crossed out - the dead] under certain circumstances the dead were washed ceremonially and [??] of by their kindred the change of colour provided by the removal by fire of the [coloured?] epidermis would where the [whiteman?] is [slow? or shown] naturally and at once suggests the relevance of one of the dead blacks. I am not aware that the Kulin had any such mortuary communal feasts, but I have [crossed out - as have] cases recorded where [crossed out - these] the dead body of a man (1) was burned also [word crossed out] where kin were is instead of being tied up & deposited in a tree, unburied. Another similar case [viewed?] and [??] to by informants to the west of Geelong, both being [belief?] "the white men came to Melbourne". - (such beliefs of white men being ghosts for other tribes)

Last edit 11 days ago by ALourie 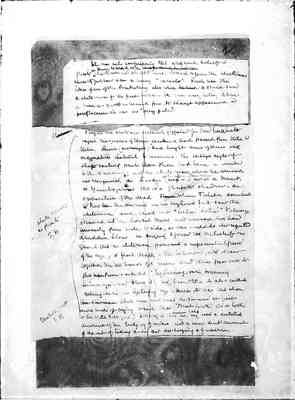 It was not surprising that with such beliefs in ghosts as I have ecorded that the [crossed out - although struck has looked upon] the Kurnai should have looked upon the whiteman when they first saw them as being "[mrarts?]". Such was the idea of one of the [Brubrobury?] who when [crossed out - he saw] a child saw a white man for the first time. He ran away believing it to be a mrart. Partly as he said from its strange appearance and partly because he was so "very pale".

I [cannot read word] the white men entered Gippsland from New South Wales rapid rumours of their existence had passed from tribe to tribe. [Lewin?] (messengers) had brought news of them with exaggeration natural to rumour. The strange sight of ships sailing past their shore had been a wonder to the Kurnai; and the white man when he arrived was [??] as Lo-au and his inferior Loau [??] (see p - ) or as a Mrart, or Yamboginni that is a ghost or shadow - an apparition of the dead. [Crossed out - These] When [Tulaba?] described [crossed out - to] him [crossed out - his] the Kurnai in his boyhood first saw the whiteman and cried out "Loȁn! Loȁn!" I always observed that he looked down and moved his head uneasily from side to side, as one would do when expected a sudden blow. On enquiring I found that the belief was general that the whiteman possessed a supernatural power of the eye, to flash death to the beholder, or to draw together the two banks of the river and thus pass over it. This [crossed out - was] former was called "Ngŭrrŭng-mri meaning Sinew-eye", and I [have?] [I?] by and heard that it also called mlang-mri or [??] eye. Hence it was that when [crossed out - the Kurnai] white men were near the Kurnai at first would make off crying to each other "Don't look! Don't look! or he will kill you." I think in this [??] belief we may see a disturbed amount of the bridging of rivers and a more direct amount of the sort of taking aim and discharging a firearm.

[Left margin note] Combine with 8B 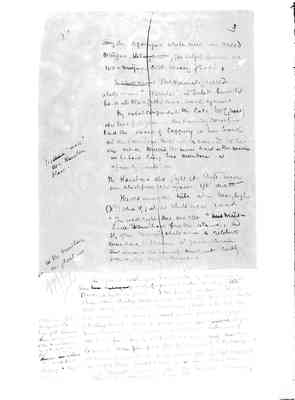 Among the [Ngaragn?] white men were called mūgan, [crossed out - that is ghost], the [nalgal?] term was ma-mūjan both meaning "ghost",

[Crossed out - A white man] The Kamilary called a white man "Wunda" and believed him to be a [crossed out - letters] blackfellow come back again.

My valued correspondent the late [Mr Chasey?] who lived for 5+ years in the Kamilary country - had the mark of Cupping in his back and the Kamilaroi [??] not be [??] but he was not a Murri (1) [emu?] back - The marks in his back being his mombarai or "family marks". -

The Karabara also thought that white men were blackfellows returned again after death.

The old men of the tribe about Maryborough (I?) when the spirits of white men said "The is all right these are the "[crossed out - mit] mŭthara" (1) come back from the island, and they often [recognized?] white men as relatives come back to them and [gave?] them [crossed out - the] names & the family were quite [??] [??] anything [??] of them.