XM604 5. Beliefs in some legendary Beings 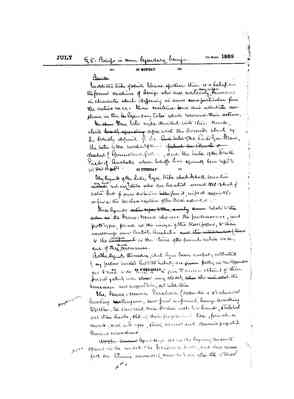 [Text has been written in an out-of-date diary]

§5. Beliefs in some legendary beings.

In all the tribes of which I have spoken there is a belief in the former existence of beings who were certainly [inserted: more or less] human in character while differing in some [crossed out: one] particulars from the native race. Their existence and their attributes are shewn in the legendary tales which recount their actions.

[crossed out: In show] These tales may be divided into three kinds, which [crossed out: hardly speaking] agree with the bounds which may be broadly defined for the [crossed out: Lake] tribes of the Lake Eyre Basin, the tribes to the northwards of them [crossed out: of which the Arunta described by Spencer and Gillen, and the tribes of the South East of Australia whose beliefs have specially been referred to in this chapter.

The legends of the Lake Eyre tribes which I shall mention [crossed out: include] are tribes not only of those who are located round that sheet of water but of some distance [crossed out: to the] from it, in fact apparently as far as the two class system of the Dieri extended.

These legends [crossed out: which refer to the early coun] relate to [crossed out: the] [crossed out: aclim na] the Mura-mura who were the predecessors, and prototypes, formed in the image of the Blackfellow, to their wanderings over Central Australia [crossed out: and the introduction of them] to the [crossed out: continent] origin in their time of the present native race, and of the sacred ceremonies.

As the legends themselves, which have been carefully collected by my fellow worker Rev Otto Siebert, are [crossed out: given] fully in the appendices All I need to do here is to give a [??] & [??] of their purport, which will show very clearly [crossed out: also] who [crossed out: and what] the mura mura are supposed to be and what [??].

[Left margin note: [Wangkaupuru?] ] The Mura-mura Paralina (appendix & p) when out hunting kangaroo, saw four unformed beings crouching together. He smoothed their bodies with his hands, stretched out their limbs, slet up their fingers and toes, formed a mouth, nose and eyes, stuck on ears and otherwise perfected them as mankind.

[Left margin note: Dieri] [crossed out: ?? around] legend says that the beginning of the earth opened in the midst & the Perigundi Lake, and there came forth the totemic animals (murdu) one after the other

Last edit 8 days ago by ALourie 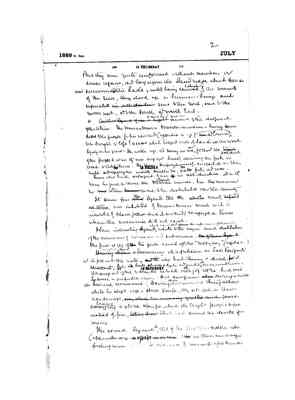 But they were quite unformed without members or sense organs, and lay upon the sandridges which then as now surround the Lake, until being revived [inserted: and straightened] by the warmth of the sun, they stood up as human beings and separated [crossed out: in all directions] some to the north, some to the north west, and the south and south east.

[crossed out: Another legend gives a different] A third legend gives an account of the dispersal of the totems. The mura-mura mandra mankana - having been killed by the people for his misdeeds (appendix x - p) [crossed out: was] and buried was brought to life by a crow which tapped with its beak in the wood lying on his grave. He woke up and seeing no one near followed the [crossed out: tracks] foot prints of the people to where they were engaged busily driving the fish in creek to catch them. He then keeping himself concealed in the water and opening his mouth swallowed the water fish and men.

Some who had escaped ran [crossed out: off] in all directions and as they ran he gave to them the totemic murdu names. In this manner the [crossed out: men] totems [crossed out: became] came to be distributed over the country.

These interesting legends [inserted: which are indeed the [??] [??] as if the same] relate to the origin and distribution of the ceremonies of circumcision and subincision. [crossed out: one of these legends] The first is that of two youths named after the "milky way" (appendix x.)

One of them threw a boomerang at a pelican in Lake Perigundi and it fell into the water, [crossed out: and] he who had thrown it dived for it [crossed out: secure it], but being sharp edged and pointed it circumcised him. Arising out of the water he beheld with joy that he had now become a perfected man. His companion [crossed out: also] diving in his [??] also became circumcised. Having then circumcised their father while he slept, with a stone knife, they set out on their wanderings, [crossed out: any where circumcising youths and men]. carrying [inserted: bearing] a stone knife, which they taught people to use instead of fire, [crossed out: telling them] which had caused the deaths of many.

The second legend is, that of the malku-malku-ulu (appendix x - p) who in their wanderings finding men about to circumcise by means of a fire brand

Last edit 2 months ago by Christine 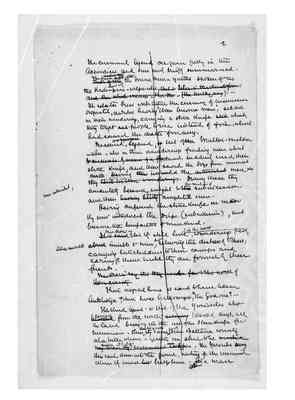 The ceremonial legends are given fully in the Appendices, and here [made?] briefly summarised.

The first legend is of [crossed out: That of the - is that] the time of Mura mura youths spoken of as the Kadi-pari- wilpa-ulu, [crossed out: that is betw is the dual form] [crossed out: and thus which means the two - (the milky way). - ]

It relates how with them the ceremony of circumcision originated, and who having "thus become men", set out on their wanderings, carrying a stone knife [crossed out: with] which they taught [crossed out: all] people to use instead of fire, which had caused the death of many.

Having conferred the stone knife on men they now introduced the [Dirpa?] (subincision), and became the benefactors of mankind.

[crossed out: It is said] The Dieri say that they still live, wandering far, in the north [crossed out: to the north about] invisible to men, but relieving the distress of others, carrying lost children to their camps and caring for them until they are found by their friends.

Their original home is said to have been [Antirit-ya?] there lives Artararpa,"the good one". -

The third legend is that of the Yuri-ulu who [crossed out: travelled] coming from the north [crossed out: coming] travelled though all the land bringing in the use of the stone knife for circumcision. Thus [inserted: these two youths] [crossed out: they] came finally to the Beltana country at a time when a youth was about to be [crossed out: much as] circumcised by fire [crossed out: may man bu circumcision with fire]. The Yuriulu seeing this went down into the ground, waiting for the moment [??] they could [crossed out: live] help him. When a man

Last edit 8 days ago by ALourie 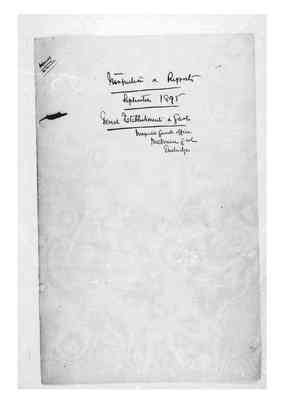 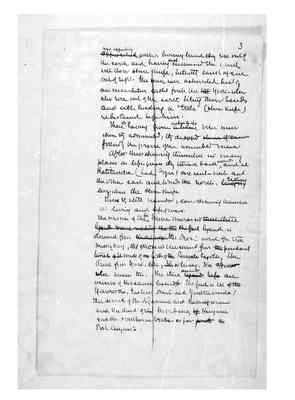 was approaching [crossed out: approached] with a burning brand they rise out of the earth and having circumcised him youth with their stone knife, instantly sank again out of sight. The men were astonished but by an incantation called forth the [Yiun-ulu?] who rose out of the earth biting their beards and each holding a "[tula?]" (stone knife) in his hand before him.

Then having given a stone knife [crossed out: a tulau?] to the men whom they administered, they disappeared [crossed out: 3 words] followed by the praises of the assembled men.

After thus showing themselves in many places as life givers they turned back northwards and at Katitandra (Lake Eyre) one went west and the other east and towards the north, taking [crossed out: bringing] every where the stone knife.

Thus they still wander, ever showing themselves as living and life givers.