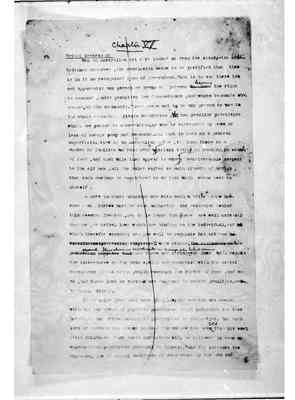 Men in Australian tribes is looked at from the standpoint of the ordinary observer, the conclusion seeems to be justified that there is in it no recognised form of government. That is to say there is not apparently any person or group of persons having the right to command, under penalties for disobedience, and whose commands are obeyed, by the community. There seems not to be any person to whom the whole community yields submission, who has peculiar privileges which are patent to observation, or who is surrounded by more or less of savage pomp and ceremony. All that is seen on a general superficial view of an Australian tribe, is that there is a number of families who roam over certain tracts of country, in search of food, and that while they appear to show a considerable respect to the old men, all the males enjoy so much liberty of action, that each one may be considered to do that which seems best to himself.

A more intimate acquaintance with such tribe shows however that there must be some authority and restraint behind this seeming freedom, for it is found that there are well understood customs, or tribal laws which are binding on the individual, and which therefore control him, as well as regulate his actions towards others. [The statements in the - crossed out] [preceding chapters show several - crossed out] I have shown in the chapter on marriage + the Initiation ceremonies that there are stringent laws which regulate the intercourse of the sexes, which are connected with the secret ceremonies of the tribe, which restrict the choice of foosd, and so on, and these laws or customs are enforced by severe penalties, even by death itself.

It is quite true that many such laws and customs are obeyed with out the dread of physical punishment being inflicted for their breach, by any tribal authority, individual or collective. But such laws or customs are obeyed because the native has been told from his earliest childhood that their infraction will befollowed by some supernatural punishment personal to himself, Take for instance the universal law of mutual avoidance of each other by the man and

Last edit 6 months ago by ALourie 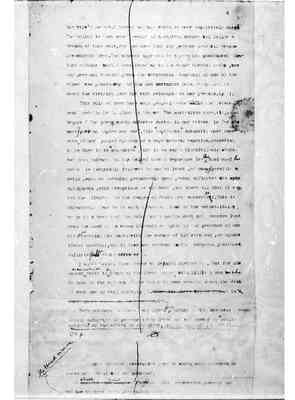 and his wife's mother. I know of no rule which is more implicitely obeyed The belief is that some result of a magical nature wil follow a breach of this rule, for instance that the persons hair will become prematurely grey. The nearest approach to a personal punishment for this offence which I have found was in the Coast Murring tribe, where any personal contact even the accidental touching of one by the other was punished by the man [xxxxxxxxxx] being compelled to leave the district, and his wife returning to her parents. (p ).

This rule of avoidance wuld properly come within the statement made by Mr. E. M. Curr in his work The Australian race. (i), where he says "The power which enforces custom in our tribes is for the most part an impersonal one". This "impersonal" authority must have been either public opinion or a supernatural sanction. According to Mr. Curr it is "education", that is to say a blackfellow is educated from infancy in the belief that a departure from the customs of his tribe is invariably followed by one at least, of many possible evils, such as becoming prematurely grey, being afflicted with opthalmia, skin erruptions or sickness, but above all that it expo ses the offender to the danger of death from sorcery (pp 2). This is undoubtedly true as to such a case as that of the mother-in-law, or as to a breach of the rule that a novice must not receive food from the hand of a woman (Kurnai) or speak in thepresence of one without covering his mouth with the corner of his skin rug, or blanket (Coast Murring), but it does not account for the corporal punishments inflicted for other offences.

I shall detail these cases at length further on, but for the moment (as an instance) refer to the Pinya of the Dieri tribe, which kills a man who is held by the old men of the tribe to have brought about the death of some one by evil magic. (p ). Other instances will be stated in their place later on in the chapter, (crossed out) Such offences as those are therefore punished by the (xxxxxxxx) actual authority of persons in the tribe and not merely by "public opinion." or the effect of education, and it (...) must be some executive powr by which such offences as these are dealt withand punished. I (will in this chapter)(crossed out) shall now show what this executive power is and how it acts in an Australian tribe. 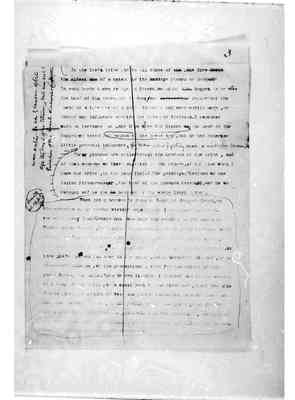 In the Dieri tribe, as in all thoseof the Lake Eyre (Basin) (crossed out) the oldest man of a totem is its (xxxxxxx) Pinaru or head, in each horde there is also a Pinaru, who might happen to be also the head of the totem. But it does not (necessarily) (crossed out) follow that the head of a totem or of a [?] division had necessarily much, or indeed any influence outside his totem or division. I remember such an instance at Lake Hope where the Pinaru was by reason of his great age, the head of the Eaglehawk totem, but he had otherwise little personal influence, for he was not a fighting man, or medicine man. The pinarus are collectively the headmen of the tibe, and of them someone was superior to the others. At the time when I knew the tribe, in the year 1861-2 The principal headman was one Jalina Piramurana, the head of the Kunaura totem, and he was recognised as the headman of the wholeDieri tribe. When going northwards from my Depot at Coopers Creek, on the occasoion of my second (xxxxxxx) expedition I obtained the services of a young Yantruwunta man who knew the country as far north as Sturts stony desert. He belonged to the small tribal group in [?] country 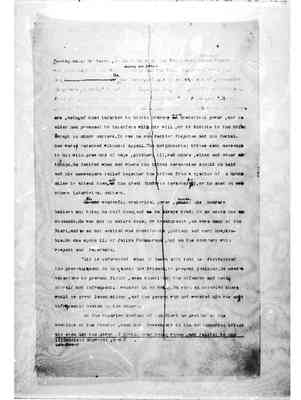 Subsequently Mr Samuel T. GasonGason, as an officer of the South Australian Mounted Police was stationed in the Dieri country during six years and was well acquainted with this [??] He [??] described him to be as one of persuasive eloquence, skillfull in a fight as, [??] [??] From [??] polished [??] [??] called him "the Frenchman". He was [?greatly feared?] [??] the neighbouring [??] Neither of his brothers, both of them inferior to him in bravery and oratoricalpower, nor to elder men presumed to interferre withhis will, or to dictate to the tribe except in minor matters. It was he who decided disputes and his decisions were received without appeal. The neighbouring tribes sent messeng(ers) to him with presents of bags, pitcher, (I), red ochre, skins and other things. He decided when and where the tribal ceremonies should be hold and his messengers called together the tribes from a radius of a hund(red) miles to attend them, and the great Mindarie ceremony (b), or to meet on other intertribal matters.

His wonderful oratorical power made his hearers believe anything he told them, and be always ready to execute his commands. he was not by nature cruel or treacherous, as were many of the Dieri, and when not excited was considerate, patient and very hospitable. No one spoke ill of Jalina Piramurana, but on the contrary with respect and reverence.

This is inderstood when Mr Gason adds that he distrubited the presents sent to him; among his friends, to prevent jealousy. He used to interfere to prevent fights, even chastising the offender and being himslef not infrequently wounded in so doing. On such occasion there would be great lamentations, and the person who had wounded him was not infrequently beaten by the others.

As the superior Headman of the Dieri he presided at the meetings of the Pinarus, sent out messangers to the neighbouring tribes and even had the power of giving away young women, not related to him. 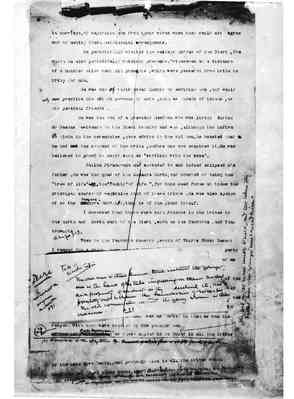 in marriage, of separating men from their wives when they could not agree and of making fresh matrimonial arangements.

He periodically visited the various hordes of the Dieri, from which he also periodically received presents. Tribes even at a distance of a hundred miles sent him presents, which were passed on from tribe to tribe for him.

He was one of their great Kunkis or medicine men, but would only practice his art on persons of note, such as heads of totems, or his personal friends.

He was the son of a previous Headman who was living during Mr Gason's residence in the Dieri country and who, although too infirm to join in the ceremonies, gave advice to the old men. He boasted that he had hte command of the tribe, before his son acquired it. He was believed to proof to magic such as "striking with the bone".

Jalina Piramurana had succeded to and indeed eclipsed his father. he was the head of the Kunaura Murudu, and boasted of being the "tree of life", the "family" of life", for this seed forms at times the principal source of vegetable food of these tribes. He was spoken of as the Illangura-Murdu (I), that is of the plant itself.

I observed that there were such Pinarus in the tribes to the north and north east of the Dieri, such as the Yaurorka, and Yan truwurta (?)