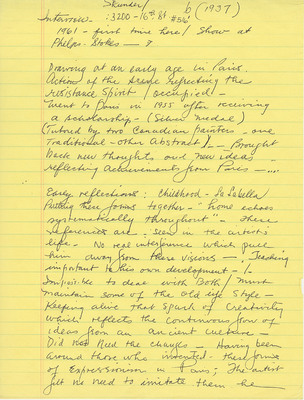 Drawing at an early age in Paris. Actions of the scene reflecting the resistance Spirit / occupied -- went to Paris in 1955 after receiving a scholarship -- (Silver Medal) (Tutored by two Canadian painters -- one traditional -- other abstract) -- Brought back new thoughts and new ideas reflecting achievements from Paris --.....

Early reflections: Childhood - La Labella putting these forms together -- "home echoes systematically throughout" -- These references are seen in the artist's life. No real interference which pull him away from these visions --. Teaching important to his development -- / -- Impossible to deal with both / must maintain some of the old life style -- keeping alive that spark of creativity which reflects the continuous flow of ideas from an ancient culture -- Did not need the changes -- Having been around those who invented these forms of Expressionism in Paris; The artist felt no need to imitate them he

Last edit 9 months ago by shakurra 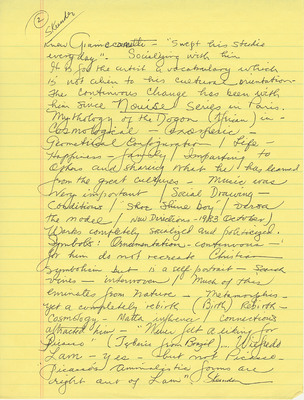 knew Giamocometti - "swept this studio everyday". Socializing with him It is for the artist a vocabulary which is not alien to his cultural orientation. The continuous change has been with him since Nouisel series in Paris. Mythology of the Dogon (African) in - Cosmological - exoteric (?) - Geometrical Configuration / Life - Happiness - family / Imparting to others and sharing what he has learned from the great cultures - Music was very important / Social Drawing - Conditions / "Shoe Shine Boy" / versa (?) the model / New Directions - 1983 October) Works completely socialized and politicized. Symbols: Ornamentation - contenuous (?) - for him do not recreate Christian Symbolizm but is a self portrait - Such (?) vines - interwoven / Much of this eminates from nature - Metamorphis yet a completely rebirth (Birth) Rebirth - Cosmology - Matta influence / connections attracted him - "Never felt a liking for Picasso" (Iberia (?) from Brazil) ... Wifredo Lam - yes - but not Picasso - Picasso's animalistic forms are right out of Lam". Skunder

Last edit 9 months ago by Jakuchu 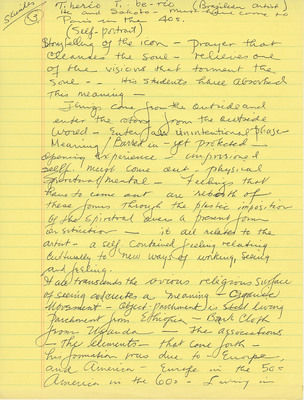 Tiberio T.- be- rio (Brazilian artist) He and Sakoto must have come to Paris in the 40s. (Self-portrait) Storytelling of the icon - prayer that cleanses the soul - relieves one of the visions that torment the soul _ _ His students have absorbed this meaning - Things come from the outside and enter the story (?) from the outside world - enter an unintentional phase - Meaning/Barred in - yet protected - opening experience - (?) self must come out - physical Spiritual mental - Feelings that have to come out are rebirth (?) of these forms through the plastic imposition of the spiritual over a present form or situation - it all relates to the artist - a self contained feeling relating culturally to new ways of working, seeing and feeling. It all transcends the ovious (?) religous surface of seeing and creates a meaning - organic movement - object - parchment is still living parchment from Ethiopia - Bark Cloth from Uganda - the associations - the elements - that come forth - his formation was due to - Europe, and America - Europe in the 50s America in the 60s - living in

Last edit 9 months ago by Jakuchu 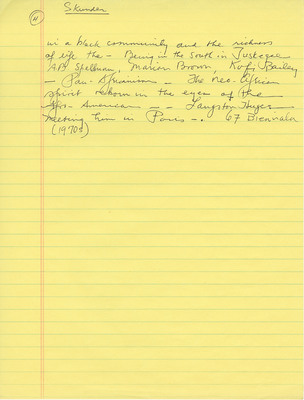 in a black community and the richness of life the - Being in the South in Tuskegee A.B. Spellman, Marion Brown, Kofi Bailey - Pan- Africanism - The Neo-African spirit reborn in the eyes of the Afro-American - - Langston Huges meeting him in Paris - . 67 Biennala (1970s)

Last edit 7 months ago by nmulder 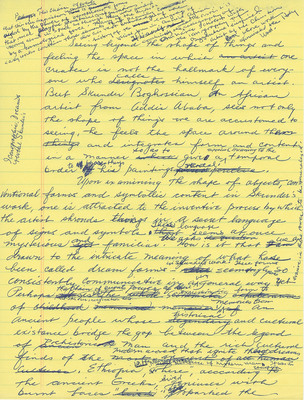 [top margin] [strikethrough: Perhaps] This chain of events that stir our imagination [strikethrough: here] in Skunder's work is [strikethrough: ?] aided by the power of expressionistic forms that reveal playful geometrical configurations moving about in space as though they were guided by a cosmological force. Many of the artists early works contain those elements that plainly [strikethrough: connect] show his vast knowledge of the history of the [strikethrough: vision] language of visual form in Ancient Africa combining the ^ ancient calligraphy of [?] Scholars with the iconography of Byzantine inspired artist of the Christian [strikethrough: Era] whose work illuminated the Italy Word[?].

Help us transcribe the papers of artist, educator, and curator David C. Driskell