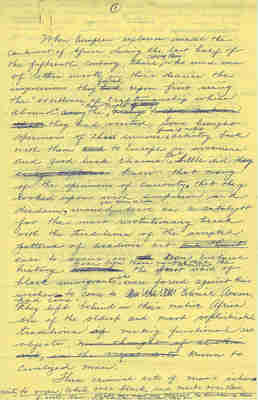 When European explorers invaded the Continent of Africa during the last haf of the fifteenth century, those amont them who were men of letters wrote in their diaries the impressions they gained upon first seeing the "excellence of craftmanship which abound" the "Primitive People" they had visited. Some brought specimens of these curios form of native artistry back with them to Europe as sourveniers and good-luck charms. But little did they know that many of the specimens of curiosity, that they looked upon with suspicion and disdain, would, in years to come, serve as a catalyst for the most revolutionary break with the traditions of the accepted patterns (?) of Academic art ever to occur in (?) cultural hstory. It was from these ranks of men of art that the first wave of black immigration who were forced against their wishes to come to Colonial America, had come. They left behind in their native Africa one of the oldest and most sophisticated traditionas making functional art objects known to civilized man. Thee criminal acts of man's inhuman anity(?) to man; white over black, and master over slave, I, LOCKE, Alain, NEGRO ART PAST AND PRESENT, The Association of Negro Folk Education, Washington, 1936, P(?) 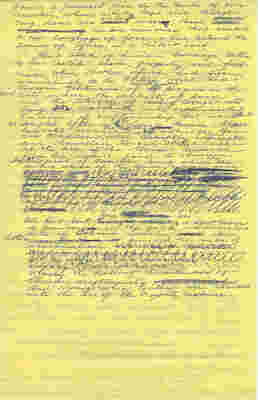 gained a permanent place in the minds of our ancestors, whose artistry kept alive - through song, dance and [visual crossed out] vigilant image, those [crossed out: ?] [crossed out: ?] sombre memories that created a new language of form which echoed the sounds of Africa in a distant land. That stock of human bondage, later to be called slave, property, and freedman, which Mother Africa had given unwillingly to the Western world, had known centuries of uninterupted [crossed out: ?] progress in the visual arts where the dexterity of hand and the literacy of seeking brought into being an elaborate and sophisticated tradition of craftsmanship that was later to be sought after in all of Colonial America. Those heritable sensibilities [inserted above] that blacks possessed within the African art tradition, were abruptly interrupted and channeled toward skilled labor at the time of the African's removal from his native land to America. In this period of transition, during which time the native skills of the African artisan were [crossed out sentences] all but lost, one [crossed out: brought about] sees a synthesis of process in the folk and decorative arts of Colonial America [crossed out: that] which later [crossed out: ?] provided the seeds of aculturation [words crossed out] whereby the distinct characteristics of African craftsmanship [crossed out: were absorbed] and iconographic content were absorbed into the art of the majority culture.

Last edit 8 months ago by Jakuchu 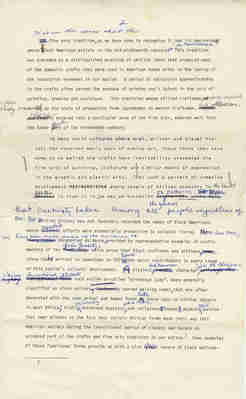 [crossed out: The] It is in this sense that the fine arts tradition, as we have come to recognize it, had its beginning[crossed out: s] among Black American artists in the mid-eighteen century in the New World. This tradition was preceded by a distinguished practice of skilled labor that produced many of the domestic crafts that were used in American homes prior to the coming of the industrial movement in our nation. A period of successful apprenticeship in the crafts often served the purpose of priming one's talent in the arts of painting, drawing and sculpture. This tradition among skilled craftsmen, [corssed out: of] which involved a plan whereby one moved[crossed out: ing] up the scale of production from journeyman to master craftsman, and [crossed out: whereby] and [crossed out: from] [crossed out: one finally] there entered into a particular area of the fine arts, endured well into the later [crossed out: part] [Quarter ?] of the nineteenth century. In many world cultures where oral, written and visual history has recorded man's ways of making art, those forms that have come to be called the crafts have inevitability preceeded the fine arts of painting, sculpture and similar means of expression in the graphic and plastic arts. That such a pattern of creative development [crossed out: ?] among people of African ancestry in the United [crossed out: America] States is true is in no way an exception [crossed out: to the rule since many] to the general patterns that creativity takes among all people regardless of race. But written history has not favorably recorded the names of Black Americans whose [crossed out: artistic] creative efforts were essentially productive to colonial living. More and more, [crossed out: there exists] we have been made aware of the existence of documented evidence, provided by representative examples of craftsmanship of the [crossed out: first order] fine quality, which prove that Black craftsmen and artisans, [crossed out: have] since their [crossed out: re] arrival in Jamestown in 1619 have been major contributors to every stage of this nation's cultural development. [crossed out: The] A distinct [crossed out: artistic] and humorous characteristic, [crossed out: of thorough ?] of Africanizing [crossed out: sophisticated forms] functional objects such as: the so-called "grotesque jugs", more generally classified as slave pottery, [crossed out: along with and handsomely] carved walking canes, that are often decorated with the same animal and human forms [crossed out: as] like those on similar objects in West Africa; highly stylistically patterned basketry made of raffia, and religious or voodoo objects still survive that bear witness to the fact that certain African forms made their way into American society during the transional period of slavery and became an accepted part of the crafts and fine arts tradition in our nation. [footnote: 2] Some examples of these functional forms [rovide us with a rich [crossed out: visual] record of black achieve-

Last edit 7 months ago by Jakuchu 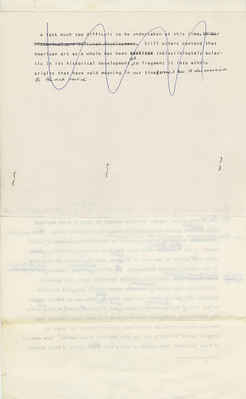 a task much too difficult to be undertaken at this time. [strikethrough]in our historical and cultural development [strikethrough]. Still other content that American art as a whole has been [X through each letter] much too [X through each letter] indiscriminately eclectic in its historical developement and to fragment it into ethnic origins that have vaid meaning in our time would be a disservice to the art world. 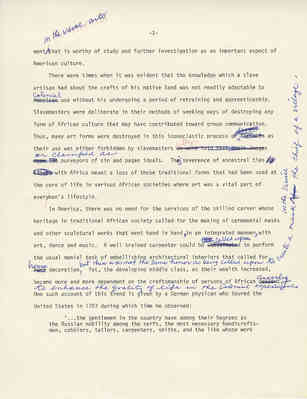 -3ment ^[in the visone? arts] that is worthy of study and further investigation as an important aspect of American culture.

There were times when it was evident that the knowledge which a slave artisan had about the crafts of his native land was not readily adaptable to [crossed out: American] colonial use without his undergoing a period of retraining and apprenticeship. Slavemasters were deliberate in their methods of seeking ways of destroying any form of African culture that may have contributed toward group communication. Thus, many art forms were destroyed in this iconoclastic process [crossed out: or they are forsaken] as their use was either forbidden by slavemasters [crossed out: or were told that their images were the] or classified as purveyors of sin and pagan ideals. This severence of ancestral ties [crossed out: by Blacks] with Africa meant a loss of those traditional forms that had been used at the core of life in various African societies where art was a vital part of everyman's lifestyle.

In America, there was no need for the services of the skilled carver ehose heritage in traditional African society called for the making of ceremonial masks and othe sculptural works that went hand in hand, in an integrated manner, with art, dance and music. A well trained carpenter could be [crossed out: substituted] called upon to perform [crossed out: such] house decoration, but this was not the same honor as being called upon to create a mask in the service the chief of a village. Yet, the developing middle class, as their wealth increased, became more and more dependent on the craftmanship of persons of African [crossed out: descent.] Ancestry. to enhance the quality of life in the Colonial experience. One such account of this trend is given by a German physican who toured the United States in 1783 during which time he observed:

"...the gentlemen in the country have among their Negroes as the Russian nobility among the serfs, the most necessary handicraftsmen, cobblers, tailors, carpenters, smiths, and the like whose work

Help us transcribe the papers of artist, educator, and curator David C. Driskell