Life as a Quaker Family: The Brookes 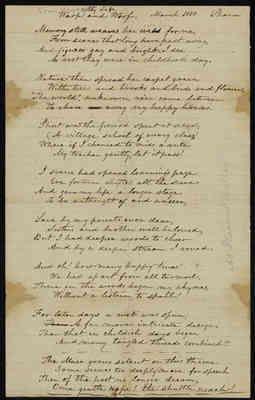 My Life Warp and Woof. March 1880. Sharon Memory still weaves her webs for me, form scenes that long have past away, And figured gay and bright I see As erst they were in the childhood's day.

Natures then spread her carpet green With trees and brooks and birds and "The world," unknown nier came between To chase away my happy hours.

Short was the period spent at school, (A village school of every class) Where if I chanced to miss a rule My teacher gently, let it pass!

I scarce had opened learning's page Eve fortune shifted all the scene And gave my life a longer stage To be the unthought of and unseen,

Love by my parents even dear, Sister and brother well be loved, But I had deeper woods to cheer And by a deeper stream I moved.

And oh! how many happy times! We had apart from all turmoil, There in the woods began my rhymes, Without a listener to shail!

For later days a web was spun; [crossed out: Than] A far more intricate design Than that in childish days begun And many tangled threads combined!!

The Muse grows silent on this theme Some scenes too deeply move for speech Then of the past no longer dream, Come gentle Hope! the shuttle reach! 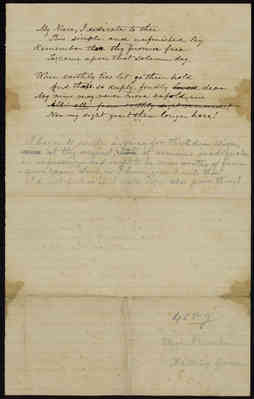 My niece, I dedicate to thee this simple and unfinished lay; remember then thy promise free to come upon that solemn day,

When earthly ties let go then hold and those so deeply, fondly dear my arms may never more enfold [crossed out: All! all! from earthly sight removed!] Now my sight greet them longer here!

I began to write a verse for the dear Eliza, [crossed out: and] at thy request, [crossed out: and] but it remains inadequate in expression and ought to be more worthy of your score years. "Such as I have, give I unto thee" I do not feel as if I could copy the poor thing!

Last edit about 2 months ago by Olivia Gargano 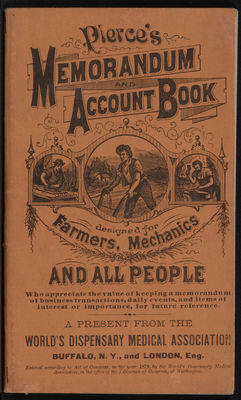 Pierce's Memorandum AND Account Book designed for Farmers, Mechanics AND ALL PEOPLE Who appreciate the value of keeping a memorandum of business transactions, daily events, and items of interest or importance, for future reference.

A PRESENT FROM THE WORLD'S DISPENSARY MEDICAL ASSOCIATION BUFFALO, N.Y., and LONDONG, Eng.

Entered according to Act of Congress, in the year 1879, by the World's Dispensary Medical Association, in the office of the Librarian of Congress, at Washington 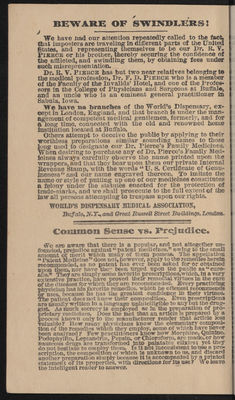 We have had our attention repeatedly called to the fact that imposters are traveling in different parts of the United States, and representing themselves to be our Dr. R. V. PIERCE or his brother, thereby securing the confidence of the afflicted, and swindling them, by obtaining fees under such misrepresentation.

Dr. R. V. PIERCE has but two near relatives belonging to the medical profession, Dr. F. D. PIERCE who is a member of the Faculty of the Invalids' Hotel, and one of the Professors in the College of Physicians and Surgeons at Buffalo, and an uncle who is an eminent general practitioner in Sabula, Iowa.

We have no branches of the World's Dispensary, except in London, England, and that branch is under the management of competent medical gentlemen, formerly, and for a long time, connected with the old and renowned home institution located at Buffalo.

Other attempt to decieve the public by applying to their worthless preparations similar sounding names to those long used to designate our Dr. Pierce's Family Medicines. When desiring to purchase any of Dr. Pierce's Family Medicines always carefully observe the name printed upon the wrappers, and that they bear upon them our private Internal Revenue Stamp, the the words "U.S. Certificate of Genuineness" and our name engrved thereon. To imitate the name or style of putting up one of our medicines constitutes a felony under the statues enacted for the protection of trade-marks, and we shall prosecute to the full extent of the law all persons attemptions to trespass upon our rights.

We are aware that there is a popular, and not altogether unfounded, prejudice against "patent medicines," owing to the small amount of merit which many of them posess. The appellation "Patent Medicine" does not, however, apply to the remedies herein recommended, as not patent has ever been asked for or obtained upon them, nor have they been urged upon the public as "curealls." They are simply some favorite prescriptions, which, in a very extensive practice, have proved their remedial virtues in the cure of the diseases for which they are recommended. Every practicing physician has his favorite remedies, which he oftenest recommends or uses, because he has the greatest confidence in their virtues. The patient does not know their composition. Even prescriptions are usually written in a language unintelligibile to any bu the druggist. As much secrecy is employed as in the preparation of proprietary medicines. Does the fact that an article is prepared by a process known only to the manufacturer render that articles less valuable? How many physicians know the elementary composition of the remedies which they employ, some of which have never been analyzed? Few practitioners know how Morphine Quinine, Podophyllin, Leptandrin, Pepsin, or Chloroform, are made, or how nauseous drugs are transformed into palatable elixirs; yet they do not hesitate to employ them. It is not inconsistent to use a prescription, the composition of which is unknown to us, and discard another preparation simply because it is accompanied by a printed statement of its properities, with directions for its use? We leave the intelligent reader to answer.

Last edit about 2 months ago by Mason Jones 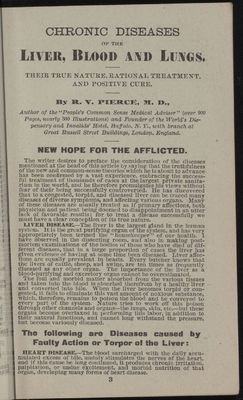 CHRONIC DISEASE of the LIVER, BLOOD, AND LUNGS. THEIR TRUE NATURE RATIONAL TREATMENT. AND POSITIVE CURE.

NEW HOPE FOR THE AFFLICTED.

The writer desires to preface the consideration of the diseases mentioned at the head of this article by saying that the truthfulness of the new and common-sense theories which he is about to advance has been confirmed by a vast experiene, embracing the successful treatment of thousands of cases at the largest private sanitarium in the world, and he therefore promulgates his views without fear of thier being successully controverted. He has discovered that to a congested, torpid and diseased liver can be traced many diseases of diverse symptoms, and affecting various organs. Many of these diseases are usually treated as if primary affections, both physicians and patients being doomed to disappointment in an utter lack of favorable results; for to treat a disease successfully we must have a clear conception of its true nature. LIVER DISEASE. - The liver is the largest gland in the human system. It is the great purifying organ of the system, and has very appropriately been termed the "housekeeper" of our health. I have observed in the dissecting room, and also in the making postmortem examinations of the bodies of those who have died of different diseases, that in a large proportion of cases the liver has given evidence of having at some time been diseased. Liver affections are equally prevalent in beasts. Every butcher knows that the liver of cattle , sheep, and swine, are ten times as frequently diseased as any other organ. The importance of the liver as a blood-purifying and excretory organ cannot be overestimated. The foul and morbid matter absorbed from the various tissues and taken into the blood is absorbed therefrom by a healthy liver and converted into bile. When the liver became torpid or congested, it fails to estimate this vast amount of noxious substance, which, therefore, remains to poison the blood and be conveyed to every part part of the system. Nature tries to work off this poison through other channels and organs - the lungs, skin, etc. - but these organs become overtaxed in performing this labor, in addition to their natural functions, and cannot long withstand the pressure, but become variously diseased.

The following are Diseases caused by Faulty Action or Torpor of the Liver :

HEART DISEASE. - The blood surcharged with thr daily accumulated excess of bile unduly stimulates the nerves of the heart, and if this cause be long continued, it produces chronic irritation, paipitation, or undue excitement, and morbid nutrition of that organ, developing many forms of heart disease. 3

Last edit about 2 months ago by Sydney Johnson 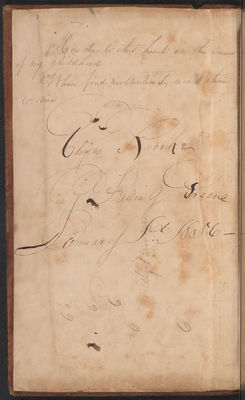 [two words written in shorthand at top of this page]

How dear to his heart are the [memories?] of my childhood

When fond recollection & recall them to view

Last edit 16 days ago by MaryV 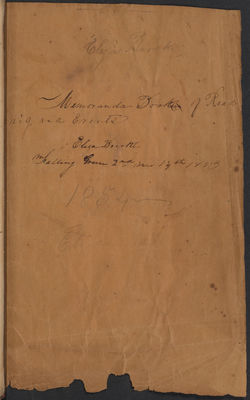 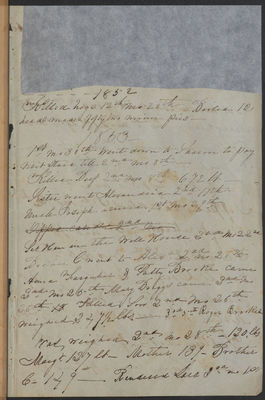 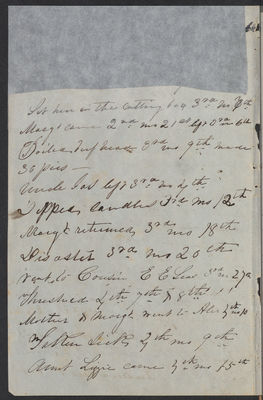 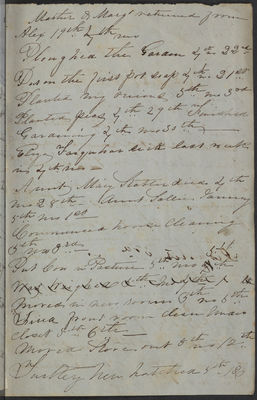