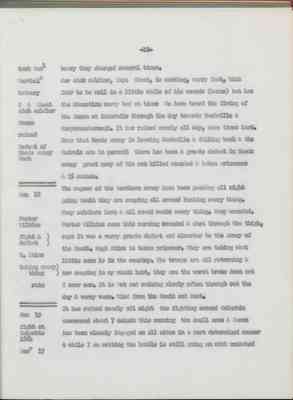 Our sick soldier, Capt Shoat, is mending, verry fast, bids fair to be well in a little while of his wounds (burns) but has the Rhumetism verry bad at times We have heard the firing of the Canon at intervals through the day towards Nashville & Murphreesborough. It has rained nearly all day, some times hard. News that Hoods armey is leaving Nashville & falling back & the Fedrels are in pursuit there has been a greate defeat in Hoods armey great many of his men killed wounded & taken prisoners & 75 cannon.

Sun 18 / Porter Wilkins / fight & defeat / H. Akins / taking everything / rain The wagons of the Southern armey have been passing all night going South they are camping all around hunting every thing. Many soldiers here & all round wants every thing. Many wounded. Porter Wilkins came this morning wounded & shot through the thigh, says it was a verry greate defeat and disaster to the Armey of the South, Hugh Akins is taken prisoner. They are taking what little corn is in the country. The troops are all returning & now camping in my woods lott, they are the worst broke down set I ever saw. It is Wet and raining slowly often through out the day & verry warm. Wind from the South and East. 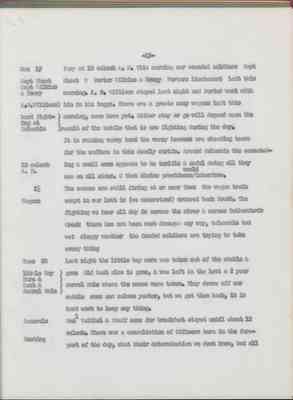 -13- Mon 19 Capt Shoat Capt Wilkins & Howry A. O. Williams hard fighting at Columbia 10 oclock A.M. 2 1/2 Wagons fury at 10 oclock A. M. This morning our wounded soldiers Capt Shoat w Porter Wilkins & Howry Porters Lieutenant left this morning. A. O. Williams stayed last night and Porter went with him in his bugga. There are a greate many wagons left this morning, some here yet. Either stay or go will depend upon the result of the battle that is now fighting during the day. It is raining verry hard the verry heavens are sheading tears for the suffers in this deadly strife. Around Columbia the cannonading & small arms appears to the terific & awful doing all they can on all sides. O that divine providence would interfere. The canons are still firing at or near Town the wagon train campt in our lott is (we understand) ordered back South. The fighting we hear all day is across the river & across Rutherfords Creek there has not been much damages any way, tolerable bad wet sloppy weather the Confed soldiers are trying to take every thing

Tues 20 little Bay Mare & Dash & Sorrel Mule Generals Meeting Last night the little bay mare was taken out of the stable & gone Old Dash is also gone & was left in the lott a 2 year sorrel Mule where the mares were taken. They drove off our cattle cows and calves yester, but we got them back, it is hard work to keep any thing. Genl Walthal & Staff came for breakfast stayed until about 12 oclock. There was a consultation of Officers here in the forepart of the day, what their determination we dont know, but all 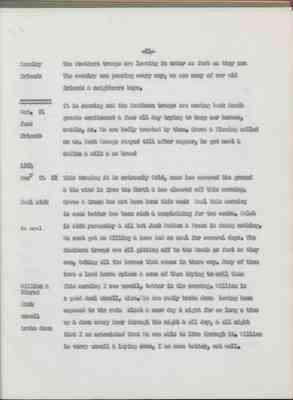 Cavalry / friends the Southern troops are leaving in order as fast as they can The cavalry are passing every way, we see so many of our old friends & neighbours boys.

Wed. 21 / fuss/ friends It is snowing and the Southern troops are moving back South greate excitement & fuss all day trying to keep our horses, cattle &c. We are badly treated by them. Grove & Fleming called on us. Doct Comage stayed till after supper, he got meat & coffee & milk & no bread

1864 Decr Th 22 Saul sick/ no meal / William & Nimrod / Sick / unwell / broke down This Morning it is extreamly Cold, snow has covered the ground & the wind is from the North & has cleared off this morning. Grove & Green has not been home this week Saul this morning is some better has been sick & complaining for two weeks. Caleb is sick yesterday & all but Jack Patton & Press is doing nothing. We cant get no Milling & have had no meal for several days. The Southern troops are all gitting off to the South as fast as they can, taking all the horses that comes in there way. Many of them have a lead horse apiece & some of them trying to sell them This morning I was unwell, better in the evening. William is a good deal unwell, also. We are realy broke down having been exposed to the rain sleat & snow day & night for so long a time up & down every hour through the night & all day, & all night that I am astonished that We are able to live through it. William is verry unwell & laying down, I am some better, not well. 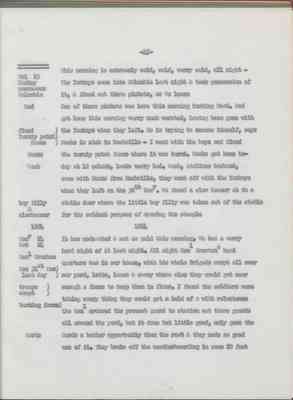 Fri 23 / Yankey possessee Columbia / Red / fixed Turnip patch fence / Monks / Wash / bay filly & clawhammer / This morning is extreamly cold, cold, verry cold, all night - The Yankeys came into Columbia last night & took possession of it, & fixed out there pickets, as We learn One of there pickets was here this morning hunting Meat. Red got home this morning verry much worsted, having been gone with the Yankeys when they left. He is trying to excuse himself, says Monks is sick in Nashville - I went with the boys and fixed the turnip patch fence where it was burnt. Monks got home to-day at 12 oclock, looks verry bad, Wash, Adalines husband, came with Monks from Nashville, they went off with the Yankeys when they left on the 30th Novr. We found a claw hammer at the stable door where the little bay filly was taken out of the stable for the evident purpose of drawing the steeple

1864 Decr 24 / Sat 24 / Gen1 Croxton / See 31st Dec last day / troops campt / burning fence / Gards / It has moderated & not so cold this morning. We had a verry hard night of it last night. All night Genl Croxtons head quarters was in our house, with his whole Brigade campt all over our yard, lotts, lanes & every where else they could get near enough a fence to keep them in fires. I found the soldiers were taking every thing they could get a hold of & with reluctance the Genl ordered the provost guard to station out there guards all around the yard, but it done but little good, only gave the Gards a better opportunity than the rest & they made as good use of it. They broke off the weatherboarding in some 20 feet 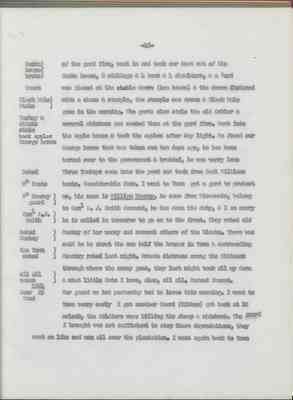 of the gard fire, went in and took our Meat out of the Smoke house, 8 midlings & 4 hams & 4 shoulders, & a Gard was placed at the stable doors (hen house) & the doors fastened with a chane & steaple, the steaple was drawn & Black Mule gone in the morning. The gards also stole the old Gobler & several chickens and cooked them at the gard fire. Went into the apple house & took the apples after day light. We found our George horse that was taken som ten days ago, he has been turned over to the government & branded, he was very lame Three Yankeys came into the yard and took from Saul Williams boots. Considerable fuss. I went to Town and got a gard to protect us, his name is William Maurey, he came from Wisconsin, belong to Genl A. J. Smith Command, he has done his duty, & I am sorry he is called in tomorrow to go on to the front. They robed old Suckey of her money and several others of the blacks. There was said to be about the one half of the houses in Town & surrounding Country robed last night. Greate distress among the Citizens through where the armey goes, they last night took all my Corn & what little Oats I have, alas, all all. Burned fences.

1864 Decr 25 Sund Our guard we had yesterday had to leave this morning. I went to Town verry early I got another Guard (Kibben) got back at 10 oclock, the Soldiers were killing the sheap & chickens. The guard I brought was not sufficient to stop their depredations, they went on like mad men all over the plantation. I went again back to Town