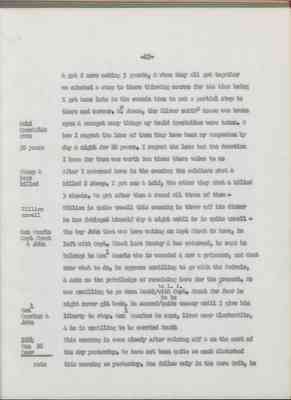 & got 2 more making 3 guards, & when they all got together we efected a stop to there theiving course for the time being I got hom late in the evenin time to put a partial stop to there mad carear. Mr. James, the Silver smiths house was broke open & amongst many things my Gould Spectables were taken. O how I regret the loss of them they have been my Companion by day & night for 20 years. I regret the loss but the devotion I have for them was worth Ten times there value to me After I returned home in the evening the soldiers shot & killed 2 sheep. I got one & half, the other they shot & killed 3 shoats. We got after them & saved all three of them - William is quite unwell this evening he threw off his dinner he has fatigued himself day & night until he is quite unwell -- The boy John that was here wating on Capt Shoat is here, he left with Capt. Shoat last Monday & has returned, he says he belongs to Genl Quarls who is wounded & now a prisoner, and dont know what to do, he appears unwilling to go with the Fedrels, & asks me the priviledge of remaining here for the present. He was unwilling to go down South to L.A. with Capt. Shoat for fear he might never git back, he seemed to be quite uneasy until I give him liberty to stay. Genl Quarles he says, lives near Clarksville, & he is unwilling to be carried South

1864 Mon 26 Decr / rain This morning is some cloudy after raining off & on the most of the day yesterday. We have no been quite so such disturbed this morning as yesterday. One fellow only in the Corn Crib, he 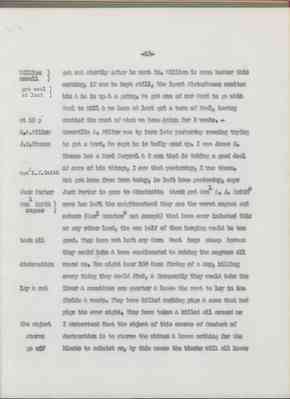 got out shortly after he went in. William is some better this morning, if he can be kept still, the least distubance excites him & he is up & a going. We got one of our Gard to go with Saul to Mill & we have at last got a turn of Meal, having Gratted the most of what have have eaten for 2 weeks. - Granville A. Pillow was by here late yesterday evening trying to get a Gard, he says he is badly used up. I see James H. Thomas has a Gard Corpral & 2 men that is taking a good deal of care of his things, I saw that yesterday, I was there. Mat got here from Town today, he left home yesterday, says Jack Porter is gone to Cincinatta thank god Genl A. J. Smiths core has left the neighbourhood they are the worst rogues and robers (Genl Croxtons not except) that have ever infested this or any other land, the one half of them hanging would be too good. They have not left any Corn Meat hogs sheep horses they could take & have condisended to robing the negroes all round us. You might hear 100 guns firing of a day, killing every thing they could find & frequently they would take the liver & sometimes one quarter & leave the rest to lay in the fields & woods. They have killed sucking pigs & sows that had pigs the over night. They have taken & killed all around me I understand that the object of this course of Conduct of destruction is to starve the whites & leave nothing for the blacks to subsist on, by this means the blacks will all leave 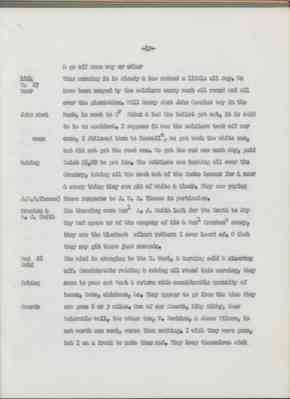 & go off some way or other

This morning it is cloudy & has rained a little all day. We have been anoyed by the soldiers verry much all around and all over the plantation. Will Henry shot John Quarles boy in the Neck, he went to Dr Akins & had the bullet got out, it is said to be an accident. I suppose it was the soldiers took off our oxen, I followed them to Maxwells, we got back the white one, but did not get the read one. We got the red one next day, paid Caleb $5,00 to get him. The soldiers are hunting all over the Country, taking all the meat out of the Smoke houses far & near & every thing they can git of white & black. They are paying there respects to J. W. B. Thomas in particular. The theaving core Genl A. J. Smith left for the South to day May God spare us of the company of his & Genl Croxtons armey, they are the balckest vilest robbers I ever heard of. O that they may git there just rewards.

Wed 28 / Cold /Robing / Guards The wind in changing to the N. West, & turning cold & clearing off. Considerable raiding & robing all round this morning, they seem to pass out West & return with considerable quantity of bacon, Oats, chickens, &c. They appear to go from the time they are gone 2 or 3 miles. One of our Guards, Kiby Hibby, does tolerable well, the other tow, W. Perkins, & James Wilson, is not worth one cent, worse than nothing. I wish they were gone, but I am a fraid to make them mad. They keep themselves sick 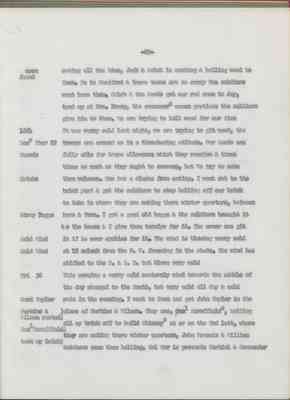 eating all the time, Jack & Caleb is cutting & halling wood to Tom. So is Sandford & there teams are so sorry the soldiers wont have them. Caleb & the Gards got our red oxen to day, tyed up at Mrs. Young, the overseers woman pretinds the soldiers give him to them. We are trying to hall wood for our fire.

It was verry cold last night, we are trying to git wood, the troops are around us in a threatening atitude. Our Gards are fully able for there allowence which they receive & three times as much as they aught to consume, but We try to make them welcome. One has a diarea from eating. I went out to the brick yard & got the soldiers to stop halling off our brick to take to where they are making their winter quarters, between here & Town. I got a good old bugga & the soldiers braught it to the house & I gave them turnips for it. The owner can git it if he ever applies for it. The wind is blowing verry cold at 12 oclock from the N.W. freezing in the shade. The wind has shifted to the E. & S. E. but blows very cold

This morning a verry cold easterly wind towards the middle of the day changed to the South, but very cold all day & cold rain in the evening. I went to Town and got John Taylor in the place of Perkins & Wilson. They are, Genl Scroffields, halling all my brick off to build Chimneys at or on the Tod lott, where they are making there winter quarters, John Francis & William Matthews seen them halling. Call Orr is provoric Martial & Commander

Last edit about 1 year ago by Jannyp 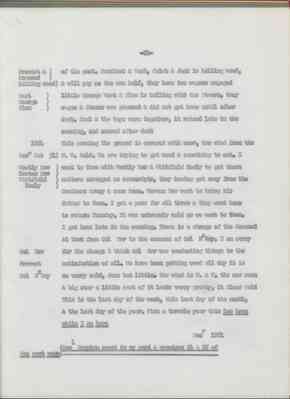 of the post. Sandford & Wash, Caleb & Jake is halling wood, & will pay me the one half, they have two wagons engaged little George West & Plum is halling with the Steers, they wagon & Steers was pressed & did not get home until after dark. Saul & the boys were together, it rained late in the evening, and snowed after dark

This morning the ground is covered with snow, the wind from the N.W. Cold. We are trying to get wood & something to eat. I went to Town with Westly Dew & Whitfield Neely to get there matters arranged as conscripts, they having got away from the Southern Army & come home. Newton Dew went to bring his father to Town. I got a pass for all three and they went home to return Tuesday. It was extremely cold as we went to Town. I got home late in the evening. There is a change of the Command at Town from Col. Orr to the command of Col. McKoy. I am sorry for the change I think Col Orr was conducting things to the satisfaction of all. We have been getting wood all day it is so verry cold, done but little. The wind is N. & W. the new moon & big star a little cast of it looks verry pretty, it Clear Cold This is the last day of the week, this last day of the month, & the last day of the year. What a terable year this has been while I am here.