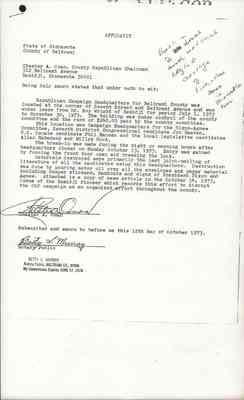 Being duly sworn states that under oath wit:

Republican Campaign Headquarters for Beltrami County was located at the corner of Second Street and Beltrami Avenue and was under lease from Mr. Roy Wright of Bemidji for period July 1, 1973 to November 30, 1973. The building was under control of the county committee and the rent of $ 240.00 paid by the county committee.

The break-in was made during the night or morning hours after headquarters closed on Sunday October 13, 1973. Entry was gained by forcing the front door open and breaking the lock.

Materials destroyed were primarily the last joint-mailing of literature of all the candidates using this headquarters. Destruction was done by pouring motor oil over all the envelopes and paper material including bumper stickers, handouts and signs of Presiden Nixon and Agnew. Attached is a copy of news article in the October 14, 1973, issue of the Bemidji Pioneer which records this effort to disrupt the GOP campaign as an organized effort throughout the county.

Subscribed and sworn to before me this 12th day of October 1973. 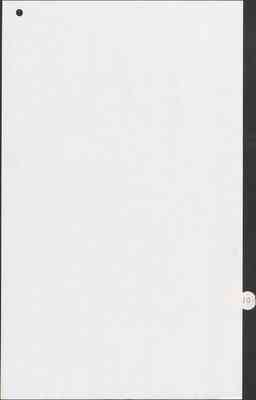 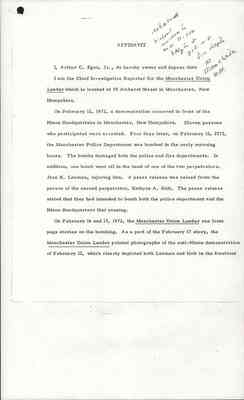 I, Arthur C. Egan, Jr., do hereby swear and depose that: I am the Chief Investigative Reporter for the Manchester Union Leader which is located at 35 Amherst Street in Manchester, New Hampshire.

On February 12, 1972, a demonstration occurred in front of the Nixon Headquarters in Manchester, New Hampshire. Eleven persons who participated were arrested. Four days later, on February 16, 1972, the Manchester Police Department was bombed in the early morning hours. The bombs damaged both the police and fire departments. In addition, one bomb went off in the hand of one of the two perpetrators, Jaan K. Laaman, injuring him. A press release was seized from the person of the second perpetrator, Kathyrn A. Holt. The press release stated that they had intended to bomb both the police department and the Nixon Headquarters that evening. 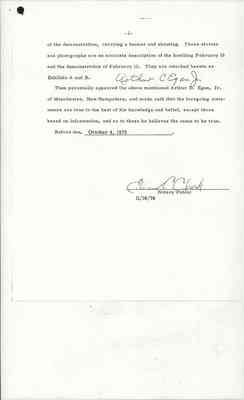 Then personally appeared the above mentioned Arthur C. Egan, Jr. of Manchester, New Hampshire, and made oath that the foregoing statements are true to the best of his knowledge and belief, except those based on information, and as to those he believes the same to be true. 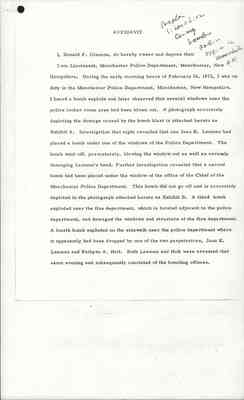 I, Donald F. Glennon, do hereby swear and depose that: I am Lieutenant, Manchester Police Department, Manchester, New Hampshire. During the early morning hours of February 16, 1972, I was on duty in the Manchester Police Department, Manchester, New Hampshire. I heard a bomb explode and later observed that several windows near the police locker room area had been blown out. A photograph accurately depicting the damage caused by the bomb blast is attached hereto as Exhibit A. Investigation that night revealed that one Jaan K. Laaman had placed a bomb under one of the windows of the Police Department. The bomb went off, prematurely, blowing the window out as well as severely damaging Laaman's hand. Further investigation revealed that a second bomb had been placed under the window of the office of the Chief of the Manchester Police Department. This bomb did not go off and is accurately depicted in the photograph attached hereto as Exhibit B. A third bomb exploded near the fire department, which is located adjacent to the police department, and damaged the windows and structure of the fire departmment. A fourth bomb exploded on the sidewalk near the police department where it apparently had been dropped by one of the two perpetrators, Jaan K. Laaman and Kathyrn A. Holt. Both Laaman and Holt were arrested that same evening and subsequently convicted of the bombing offense.