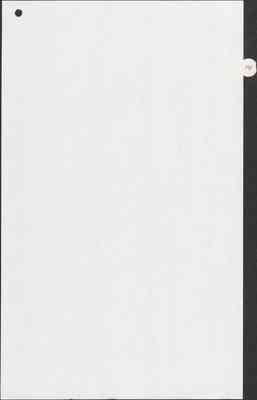 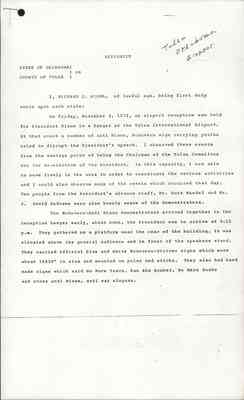 On Friday, November 3, 1972, an airport reception was held for President Nixon in a hanger at the Tulsa International Airport. At that event a number of anti Nixon, McGovern sign carrying youths tried to disrupt the President's speech. I observed these events from the vantage point of being the Chairman of the Tulsa Committee for the Re-election of the President. In this capacity, I was able to move freely in the area in order to coordinate the various activities and I could also observe many of the events which occurred that day. Two people from the President's advance staff, Mr. Buzz Mandel and Mr. J. David Andrews were also keenly aware of the demonstrators.

The McGovern-Anti Nixon demonstrators arrived together in the reception hanger early, about noon, the President was to arrive at 3:15 p.m. They gathered on a platform near the rear of the building, it was elevated above the general audience and in front of the speakers stand. They carried official blue and white McGovern-Shriver signs which were about 16X24" in size and mounted on the poles and sticks. They also had hand made signs which said No More Tears, Ban the Bomber, No More Bombs and other anti Nixon, anti war slogans. 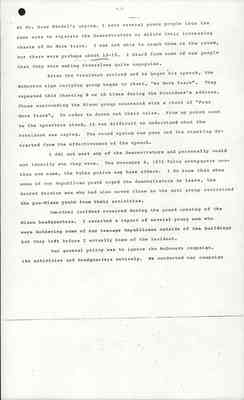 At Mr. Buzz Mandel's urging, I sent several young people into the same area to seperate the demonstrators or dilute their increasing chants of No More Years. I was not able to count them in the crowd, but there were perhaps about 10-15. I heard from some of our people that they were making themselves quite unpopular.

After the President arrived and he began his speech, the McGovern sign carrying group began to chant, "No More Years". They repeated this chanting 8 or 10 times during the President's address. Those surrounding the Nixon group countered with a chant of "Four More Years", in order to drown out their noise. From my point next to the speakers stand, it was difficult to understand what the President was saying. The sound system was poor and the chanting detracted from the effectiveness of the speech.

I did not meet any of the demonstrators and personally could not identify who they were. The November 4, 1972 Tulsa newspapers mention one name, the Tulsa police may have others. I do know that when some of our Republican youth urged the demonstrators to leave, the Secret Service men who had also moved close to thet anti group restrained the pro-Nixon youth from their activities.

One other incident occurred during the grand opening of the Nixon headquarters. I recieved a report of several young men who were bothering some of our teenage Republicans outside of the buildings but they left before I actually knew of the incident.

Our general policy was to ignore the McGovern campaign. its activities and headquarters entirely. We conducted our campaign 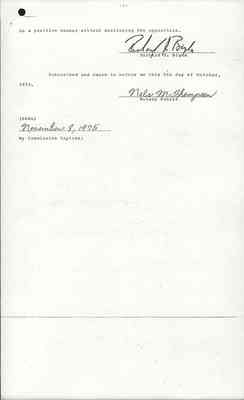 in a positive manner without mentioning the opposition.

Subscribed and sworn to before me this 5th day of October, 1973 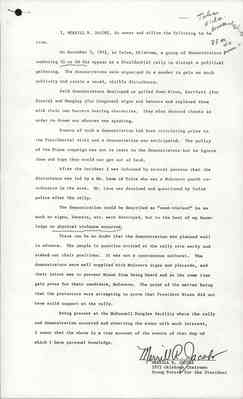 I, MERRILL R. JACOBS, do swear and affirm the following to be true.

On November 3, 1972, in Tulsa, Oklahoma, a group of demonstrators numbering 35 or 40 did appear at a Presidential rally to disrupt a political gathering. The demonstrators were organized in a manner to gain as much publicity and create a vocal, visible disturbance.

Said demonstrators destroyed or pulled down Nixon, Bartlett (for Senate) and Hewgley (for Congress) signs and banners and replaced them with their own banners bearing obscenities. They also shouted chants in order to drown out whoever was speaking.

Rumors of such a demonstration had been circulating prior to the Presidential visit and a demonstration was anticipated. The policy of the Nixon campaign was not to react to the demonstrators but to ignore them and hope they would not get out of hand.

After the incident I was informed by several person that the disturbance was led by a Mr. Lane of Tulsa who was a McGovern youth coordinator in the area. Mr. Lane was detained and questioned by Tulsa police after the rally.

The demonstration could be described as "semi-violent" in as much as signs, banners, etc. were destroyed, but to the best of my knowledge no physical violence occurred.

There can be no doubt that the demonstration was planned well in advance. The people in question arrived at the rally site early and staked out their positions. It was not a spontaneous outburst. The demonstrators were well supplied with McGovern signs and placards, and their intent was to prevent Nixon from being heard and at the same time gain press for their candidate, McGovern. The point of the matter being that the protestors were attempting to prove that President Nixon did not have solid support at the rally.

Being present at the McDonnell Douglas facility where the rally and demonstration occurred and observing the event with much interest, I swear that the above is a true account of the events of that day of which I have personal knowledge.