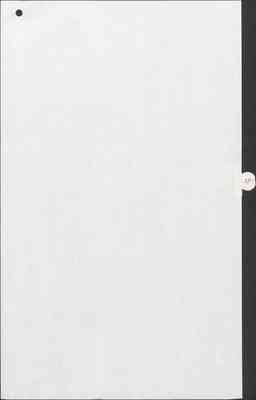 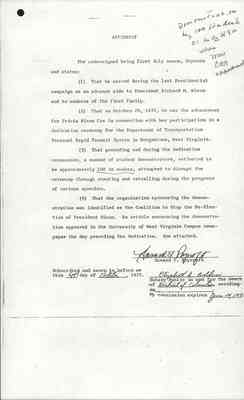 The undersigned being first duly sworn, deposes and states:

(1) That he served during the last Presidential campaign as an advance aide to President Richard M. Nixon and to members of the First Family.

(2) That on October 24, 1972, he was the advanceman for Tricia Nixon Cox in connection with her participation in a dedication ceremony for the Department of Transportation Personal Rapid Transit System in Morgantown, West Virginia.

(3) That preceding and during the dedication ceremonies, a number of student demonstrators, estimated to be approximately 100 in number, attempted to disrupt the ceremony through chanting and catcalling during the progress of various speeches.

(4) That the organization sponsoring the demonstration was identified as the Coalition to Stop the Re-Election of President Nixon. An article announcing the demonstration appeared in the University of West Virginia Campus newspaper the day preceeding the dedication. See attached.

Subscribed and sworn to before me this 4th day of [handwritten]October[handwritten end], 1973 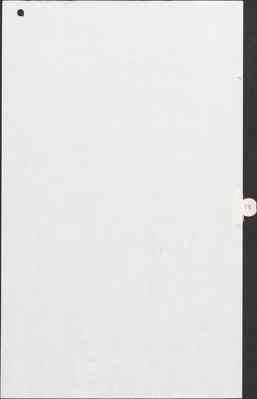 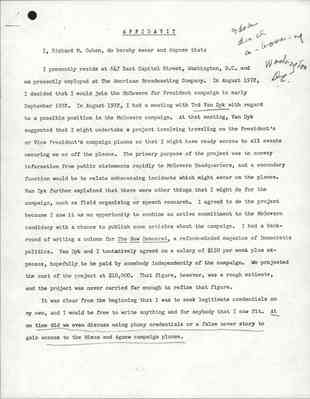 I, Richhard M. Cohen, do hereby swear and depose that:

I presently reside at 647 East Capitol Street, Washington, D.C. and am presently employed at The American Broadcasting Company. In August 1972, I decided that I would join the McGovern for President campaign in early September 1972. In August 1972, I had a meeting with Ted Van Dyk with regard to a possible position in the McGovern campaign. At that meeting, Van Dyk suggested that I might undertake a project involving traveling on the President's or Vice President's campaign planes so that I might have ready access to all events occuring on or off the planes. The primary purpose of the project was to convey information from public statements rapidly to McGovern Headquarters, and a secondary function would be to relate embarassing incidents which mmight occur on the planes. Van Dyk further explained that there were other things that I might do for the campaign, suchh as field organizing or speech research. I agreed to do the project because I saw it as an opportunity to combine an active committment to the McGovern candidacy with a chance to publish some articles about the campaign. I had a backround of writing a column for The New Democrat, a reform-minded magazine of Democratic politics. Van Dyk and I tentatively agreed on a salary of $150 per week plus expenses, hopefully to be paid by somebody independently of the campaign. We projected the cost of the project at $10,000. That figure, however, was a rough estimate, and the project was never carried far enough to refine that figure.

It was clear from the beginning that I was to seek legitimate credentials on my own, and I would be free to write anything and for anybody that I saw fit. At no time did we even discuss using phony credentials or a false cover story to gain access to the Nixon and Agnew campaign planes. 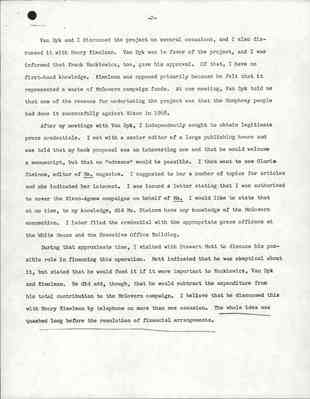 Van Dyk and I discussed the project on several occasions, and I also discussed it with Henry Kimelman. Van Dyk was in favor of the project, and I was informed that Frank Mankiewicz, too, gave his approval. Of that, I have no first-hand knowledge. Kimelman was opposed primarily because he felt that it represented a waste of McGovern campaign funds. At one meeting, Van Dyk told me that one of the reasons for undertaking the project was that the Humphrey people had done it successfully against Nixon in 1968.

After my meetings with Van Dyk, I independently sought to obtain legitimate press credentials. I met with a senior editor of a large publishing house and was told that my book proposal was an interesting one and that he would welcome a manuscript, but that no "advance" would be possible. I then went to see Gloria Steinem, editor of Ms. magazine. I suggested to her a number of topics for articles and she indicated her interest. I was issued a letter stating that I was authorized to cover the Nixon-Agnew campaigns on behalf of Ms. I would like to state that at no time, to my knowledge, did Ms. Steinem have any knowledge of the McGovern connection. I later filled the credential with the appropriate press officers at the White House and the Executive Office Building.

During that approximate time, I visted with Stewart Mott to discuss his possible role in financing this operation. Mott indicated that he was skeptical about it, but stated that he would fund it if it were importat to Mankiewicz, Van Dyk and Kimelman. He did add, though, that he would subtract the expenditure from his total contribution to the McGovern campaign. I believe that he discussed this wit Henry Kimelman by telephone on more than one occasion. The whole idea was quashed long before the resolution of financial arrangements.