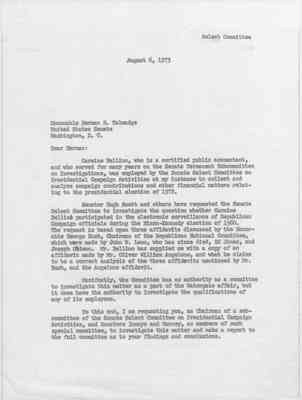 Dear Herman: Carmine Bellino, who is a certified public accountant, and who served for many years on the Senate Permanant Subcommittee on Investigations, was employed by the Senate Select Committee on Presidential Campaign Activities at my instance to collect and analyse campaign contributions and other financial matters relating to the presidential election of 1972.

Senator Hugh Scott and others have requested the Senate Select Committee to investigate the question whether Carmine Bellino participated in the electronic surveillance of Republican Campaign officials during the Nixon-Kennedy election of 1960. The request is based upon three affidavits discussed by the Honorable George Bush, Chairman of the Republican National Committee, which were made by John W. Leon, who has since died, Ed Jones, and Joseph Simon. Mr. Bellino has supplied my with a copy of an affidavit made by Mr. Oliver William Angelone, and what he claims to be a correct analysis of the three affidavits mentioned by Mr. Bush, and the Angelone affidavit.

To this end, I am requesting you, as Chairmand of a subcommittee of the Senate Select Committee on Presidential Campaign Activities, and Senators Inouye and Gurney, as members of such special committee, to investigate this matter and make a report to the full commitee as to your findings and conclusions. 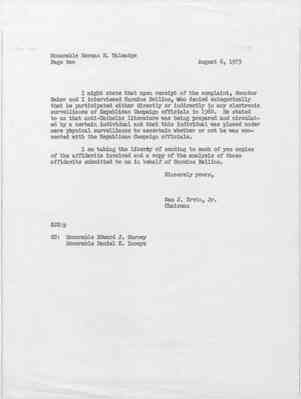 I might state that upon receipt of the complaint, Senator Baker and I interviewed Carmine Bellino who denied categorically that he participated either directly or indirectly in any electronic surveilliance of Republican Campaign officials in 1960. He state to us that anti-Catholic literature was being prepared and circulated by a certain individual and that this individual was placed under mere physical survelliance to ascertain whether or not he was connected with the Republican Campaign officials.

I am taking the liberty of sending to each of you copies of the affidavits involved and a copy of the analysis of those affidavits submitted to me in behalf of Carmine Bellino. 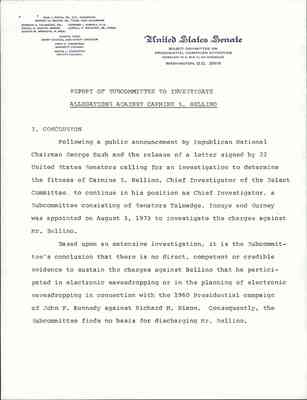 REPORT OF SUBCOMMITTEE TO INVESTIGATE ALLEGATIONS AGAINST CARMINE S. BELLINO

I. CONCLUSION Following a public announcement by Republican National Chairman George Bush and the release of a letter signed by 22 United States Senators calling for an investigation to determine the fitness of Carmine S. Bellino, Chief Investigator of the Select Committee, to continue in his position as Chief Investigator, a Subcomittee consisting of Senators Talmadge, Inouye, and Gurney was appointed on August 3, 1973 to investigate the charges against Mr. Bellino. Based upon an extensive investigation, it is the Subcommittee's conclusion that there is no direct, competent or credible evidence to sustain the charges against Bellino that he participated in electronic eavesdropping or in the planning of electronic eavesdropping in connection with the 1960 Presidential campaign of John F. Kennedy against Richard M. Nixon. Consequently, the Subcommittee finds no basis for discharging Mr. Bellino. 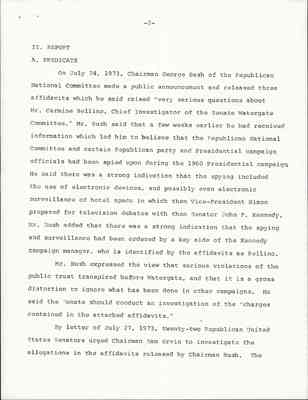 On July 24, 1973, Chairman George Bush of the Republican National Committee made a public announcement and released three affidavits which he said raised "very serious questions about Mr. Carmine Bellino, Chief Investigator of the Senate Watergate Committee." Mr. Bush said that a few weeks earlier he had recieved information which led him to believe that the Republican National Committee and certain Republican party and Presidential campaign officials had been spied upon during the 1960 Presidental campaign. He said there was a strong indication thatthe spying included the use of electronic devices, and possibly even electronic surveillance of hotelspace in which then Vice-President Nixon prepared for a television debate with then Senator John F. Kennedy. Mr. Bush added that there was a strong indication that the spying and surveillance had been ordered by a key aid of the Kennedy campaign manager, who is identified by the affadavits as Bellino.

Mr. Bush expressed the view that serious violations of the public trust transpired before Watergate, and that it is a gross distortion to ignore what has been done in other campaigns. He said the Senate should conduct an investigation of the "charges contained in the attached affidavits."

By the letter of July 27, 1973, twenty-two Republican United States Senators urged Chairman Sam Ervin to investigate the allegations in the affidavits released by Chairman Bush. The 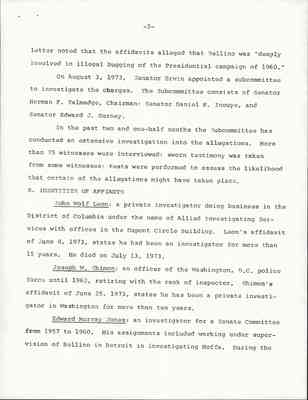 letter noted that the affidavits alleged that Bellino was "deeply involved in illegal bugging of the Presidential campaign of 1960."

In the past two and one-half months the Subcommittee has conducted an extensive investigation into the allegations. More than 25 witnesses were interviewed; sworn testimony was take from some witnesses; tests were performed to asses the likliehood that certain of the allegations might have taken place.

B. IDENTITIES OF AFFIANTS

John Wolf Leon: a private investigator doing business in the District of Columbia under the name of Allied Investigating Services with offices in the Dupont Circle Building. Leons' affidavit of June 8, 1973, states that he had been an investigator for more than 15 years. He died on July 13, 1973.

Joseph W. Shimon: an officer of the Washington, D. C. police force until 1962, retiring with the rank of inspector. Shimon's affidavit of June 25, 1973, states he has been a private investigator in Washington for more than 10 years.

Edward Murray Jones: an investigator for a Senate Committee form 1957 to 1960. His assignments included working under supervision of Bellino in Detroit investigating Hoffa. During the