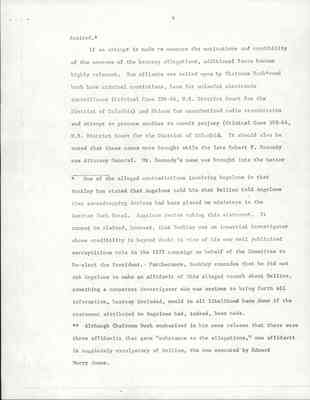 * One of the allegations contradictions involving Angelone is that Buckley has stated that Angelone told him that Bellino told Angelone that eavesdropping devices had been placed on ministers in the Wardman Park Hotel. Angelone denies making this statement. It cannot be claimed, however, that Buckley was an impartial investigator whose credibility is beyond doubt in view of his now well publicized surreptitious role in the 1972 campaign on behalf of the Committee to Re-elect the President. Furthermore, Buckley concedes that he did not ask Angelone to make an affidavit of this alleged remark about Bellino, something a competent investigator who was anxious to bring forth all information, hearsay included, would in all liklihood have done if the statement attributed to Angelone had, indeed, been made.

** Although Chairman Bush emphasized in his news release that there were three affidavits that gave "substance to the allegations," one affidavit is completely exculpatory of Bellino, the one executed by Edward Murry Jones. 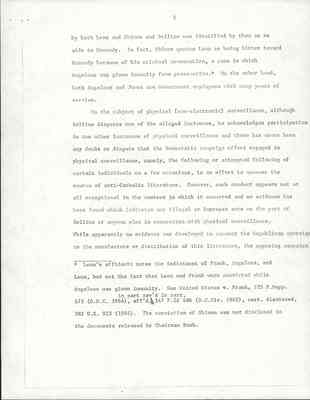 by both Leon and Shimon and Bellino was identified by them as an aide to Kennedy. In fact, Shimon quotes Leon as being bitter toward Kennedy becasuse of his criminal prosecution, a case in which Angelone was given immunity from prosecution.* On the other hand, both Angelone and Jones are Government employees with many years of service.

On the subject of physical (non-electronic) surveillance, although Bellino disputes one of the alleged instances, he acknowledges participation in two other instances of physcial surveillance and there has never been any doubt or dispute that the Democratic campaign effort engaged in physical surveillance, namely, the following or attempted following of certain individuals on a few occasions, in an effort to uncover the source of anti-Catholic literature. However, such conduct appears not at all exceptional in the context in which it occurred an no evidence has been found which indicates any illegal or improper acts on the part of Bellino or anyone else in connection with physical surveillance. Bellino or anyone else in connection with physical surveillance. While apparently no evidence was developed to connect the Republican campaign to the manufacture or distribution of this literature, the opposing campaign 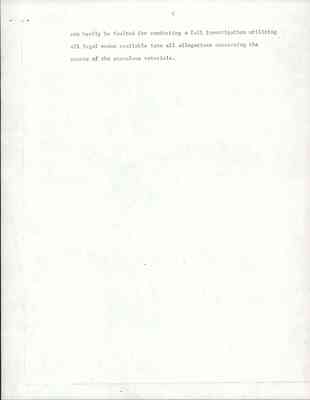 can hardly be faulted for conducting a full investigation utilizing all legal means available into all allegations concerning the soruce of scurulous materials.