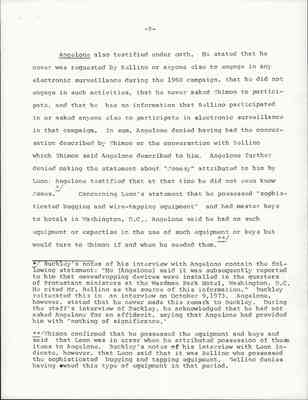 Angelone also testified under oath. He stated that he never was requested by Bellino or anyone else to engage in any electronic surveillance during the 1960 campaign, that he did not engage in such activities, that he never asked Shimon to participate, and that he has no information that Bellino participated in or asked anyone else to participate in electronic surveillance in that campaign. In sum, Angelone denied having had that conversation described by Shimon or the conversation with Bellino which Shimon said Angelone described to him. Angelone further denied making the statement about "Jonesy" attributed to him by Leon; Angelone testified that at the time he did not even know Jones. */ Concerning Leon's statement that he possessed "sophisticated bugging and wire-tapping equipment" and had master keys to hotels in Washington, D.C., Angelone said he had no such equipment or expertise in the use of such equipment or keys but would turn to Shion if and when he needed them. **/

*/ Buckley's notes of his interview with Angelone contain the following statement: "He (Angelone) said it was subsequently reported to him that eavesdropping devices were installed in the quarters of Protestant ministers at the Wardmanpark Hotel, Washington, D. C. He cited Mr. Bellino as the source of this information." Buckley reiterated this in an interview on October 9, 1973. Angelone, however, stated that he never made this remark to Buckley. During the staff's interview of Buckley, he acknowledged that he had not asked Angelone for an affidavit, saying that Angelone had provided him with "nothing of significance."

**/ Shimon confirmed that he possessed the equipment and keys and said that Leon was in error when he attributed possession of these items to Angelone. Buckley's notes of his interview with Leon indicate, however, that Leon said that it was Bellino who possessed the sophisicated bugging and tapping equipment. Bellino denies having owned this type of equipment in that period. 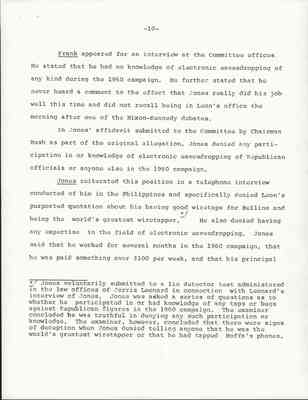 Frank appeared for an interview at the Committee offices. He stated that he had no knowledge of electronic eavesdropping of any kind during the 1960 campaign. He further stated the he never heard a comment to the effect that Jones really did his jon well this time and did not recall being in Leon's office the morning after one of the Nixon-Kennedy debates.

In Jones' affidavit submitted to the Committee by Chairman Bush as part of the orignial allegation, Jones denied any participation in or knowledge of electronic eavesdropping of Republican officials or anyone else in the 1960 campaign.

Jones reiterated this position in a telephone interview conducted of him in the Phillippines and specifically denied Leon's purported quotation about his having good wiretaps for Bellino and being the world's greatest wiretapper. */ He also denied having any expertise in the field of electronic eavesdropping. Jones said that he worked for several months in the 1960 campaign, that he was paid something ovr $100 per week, and that his principal

*/ Jones voluntarily submitted to a lie detector test administered in the law offices of Jerris Leonard in connection with Leonard's interview of Jones. Jones was asked a series of questions as to whether he participated in or had knowledge of any taps or bugs against Republican figures in the 1960 campaign. The examiner concluded he was truthful in denying any such participation or knowledge. The examiner, however, concluded that there was signs of deception when Jones denied telling anyone that he was the world's greatest wiretapper or that he had tapped Hoffa's phones. 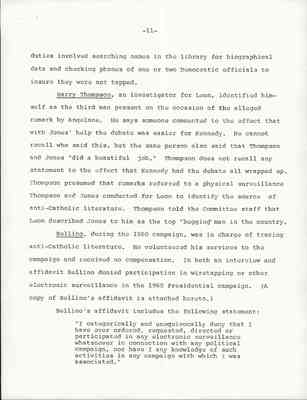 duties involved searching names in the library for biographical data and checking phones of one or two Democratic officials to insure they were not tapped.

Harry Thompson, an investigator for Leon, identified himself as the third man present on the occasion of the alleged remark by Angelone. He says someone commented to the effect that with Jones' helo the debate was easier for Kennedy. He cannot recall who said this, but the same person also said that Thompson and Jones "did a beautiful job." Thompson does not recall any statement to the effect that Kennedy had the debate all wrapped up. Thompson presumed that remarks referred to a physical surveillance Thompson and Jones conducted for Leon to identify the source of anti-Catholic literature. Thompson told the Committee staff that Leon described Jones to him as the top "bugging" man in the country.

Bellino, during the 1960 campaign, was in charge of tracing anti-Catholic literature. He volunteered his services to the campaign and recieved no compensation. In both an interview and affidavit Bellino denied participation in wiretapping or other electronic surveillance in the 1960 Presidential campaign. (A copy of Bellino's affidavit is attached herto.)

Bellino's affidavit includes the following statement: "I categorically and unequivocally deny that I have ever ordered, requested, directed or participated in any electronic surveillance whatsoever in connection with any political campaign, nor have I any knowledge of such activities in any campaign with which I was assciated." 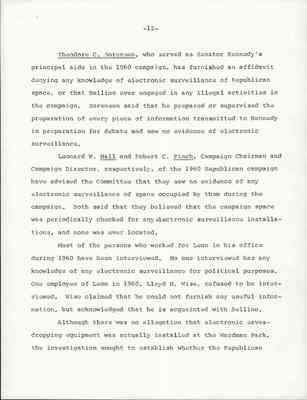 Theodore C. Sorensen, who served as Senator Kennedy's principal aide in the 1960 campaign, has furnished an affidavit denying any knowledge of electronic surveillance of Republican space, or that Bellino ever engaged in any illegal activities in the campaign. Sorensen said that he prepared or supervised the preperation of every piece of information transmitted to Kennedy in preperation for debate and saw no evidence of electronic surveillance.

Leonard W. Hall and Robert C. Finch, Campaign Chairman and Campaign Director, repectively, of the 1960 Republican campaign have advised the Committee that they saw no evidence of any electronic surveillance of space occupied by them during the campaign. Both said that they believed that the campaign space was periodically checked for any electronic surveillance installations, and none was ever located.

Most of the persons who worked for Leon in his office during 1960 have been interviewed. No one interviewed has any knowledge of any electronic surveillance for political purposes. One employee of Leon in 1960, Lloyd H. Wise, refused to be interviewed. Wise claimed that he could not furnish any useful information, but acknowledged that he is acquainted with Bellino.

Although there was no allegation that electronic eavesdropping equipment was actually installed at the Wardman Park, the investigation sought to establish whether the Republican 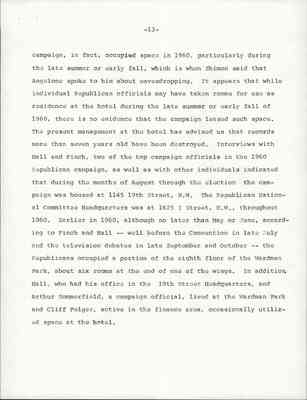 campaign, in fact, occupied space in 1960, particularly during the late summer or early fall, which is when Shimon said that Angelone spoke to him about eavesdropping. It appears that while individual Republicans officials may have taken rooms for use as residence at the hotel during the late summer or early fall of 1960, there is no evidence that the campaign leased such space. The present manegement at the hotel has advised us that records more than seven years old have been destroyed. Interviews with Hall and Finch, two of the top campaign officials in the 1960 Republican campaign, as well as with other individuals indicated that during the months of August through the election the campaign was housed at 1145 19th Street, N. W. The Republican National Committee Headquarters was at 1625 I Street, N. W., throughout 1960. Earlier in 1960, although no later than May or June, according to Finch and Hall -- well before the Convention in late July and the television debates in late September and October -- the Republicans occupied a portion of the eighth floor of the Wardman Park, about six rooms at the end of one of the wings. In addition, Hall, who had his office in the 19th Street Headquarters, and Arthur Sommerfield, a campaign official, lived at the Wardman Park and Cliff Folger, active in the finance area, occasionally utilized space at the hotel.