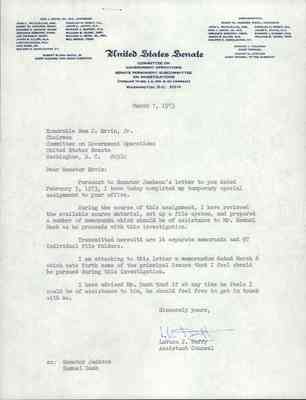 Pursuant to Senator Jackson's letter to you dated February 5, 1973, I have today completed my temporary special assignment to your office.

During the course of this assignment, I have reviewed the available source material, set up a file system, and prepared a number of memoranda which should be of assistance to Mr. Samuel Dash as he proceeds with this investigation.

I am attaching to this letter a memorandum dated March 6 which sets forth some of the principal issues that I feel should be pursued during this investigation.

I have advised Mr. Dash that if at any time he feels I could be of assistance to him, he should feel free to get in touch with me. 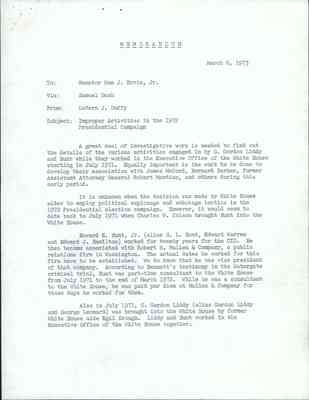 A great deal of investigative work is needed to find out the details of the various activities engaged in by G. Gordon Liddy and Hunt while they worked in the Executive Office of the White House starting in July 1971. Equally important is the work to be done to develop their association with James McCord, Bernard Barker, former Assistant Attorney General Robert Mardian, and others during this early period.

It is unknown when the decision was made by White House aides to employ political espionage and sabotage tactics in the 1972 Presidential election campaign. However, it would seem to date back to July 1971 when Charles W. Colson brought Hunt into the White House.

Howard E. Hunt, Jr. (alias H. L. Hunt, Edward Warren and Edward J. Hamilton) worked for twenty years for the CID. He then became associated with Robert R. Mullen & Company, a public relations firm in Washington. The acutal dates he worked for this firm have to be established. We do know that he was vice president of that company. According to Bennett's testimony in the Watergate criminal trial, Hunt was part-time consultant to the White House from July 1971 to the end of March 1972. While he was a consultant to the White House, he was paid per diem at Mullen & Company for those days he worked for them. 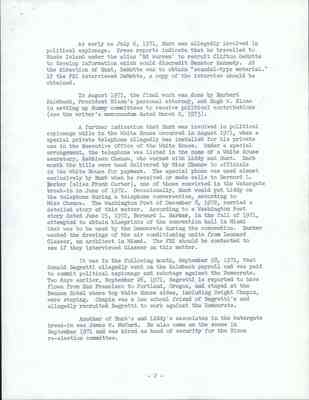 As early as July 6, 1971, Hunt was allegedly involved in political espionage. Press reports indicate that he travelled to Rhode Island under the alias "Ed Warren" to recruit Clifton DeMotte to develop information which would discredit Senator Kennedy. At the direction of Hunt, DeMotte was to obtain "scandal-type material." If the FBI interviewed DeMotte, a copy of the interview should be obtained.

A further indication that Hunt was involved in political espionage while in the White House occurred in August 1971, when a special private telephone allegedly was installed for his private use in the Executive Office of the White House. Under a special arrangement, the telephone was listed in the name of a White House secretary, Kathleen Chenow, who worked with Liddy and Hunt. Each month the bills were hand delivered by Miss Chenow to officials in the White House for payment. The special phone was used almost exclusively by Hunt when he received or made calls to Bernard L. Barker (alias Frank Carter), one of those convicted in the Watergate break-in in June of 1972. Occasionally, Hunt would put Liddy on the telephone during a telephone conversation, according to Miss Chenow. The Washington Post of December 8, 1972, carried a detailed story of this matter. According to a Washington Post story dated June 25, 1972, Bernard L. Barker, in the fall of 1971, attempted to obtain blueprints of the convention hall in Miami that was to be used by the Democrats during the convention. Barker wanted the drawings of the air conditioning units from Leonard Glasser, an architect in Miami. The FBI should be contacted to see if they interviewed Glasser on this matter.

It was in the following month, September 28, 1971, that Donald Segretti allegedly went on the Kamlbach payroll and was paid to commit political espionage and sabotage against the Democrats. Two days earlier, September 26, 1971 Segretti is reported to have flown from San Francisco to Portland, Oregon, and stayed at the Benson Hotel where top White House aides, including Dwight Chapin, were staying. Chapin was a law school friend of Segretti's and allegedly recruited Segretti to work against the Democrats.

Another of Hunt's and Liddy's associates in the Watergate break-in was James W. McCord. He also came on the scene in September 1971 and was hired as head of security for the Nixon re-election committee. 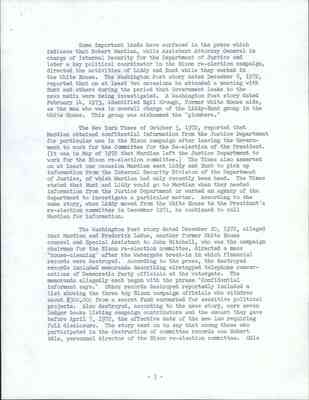 Some important leads have surfaced in the press which indicate that Robert Mardian, while Assistant Attorney General in charge of Internal Security for the Department of Justice and later a key political coordinator in the Nixon re-election campaign, directed the activities of Liddy and Hunt while they worked in the White House. The Washington Post story dated December 8, 1972, reported that on at least two occasions he attended a meeting with Hunt and others during the period that Government leaks to the new media were being investigated. A Washington Post story dated February 14, 1973, identified Egil Krough, former White House aide, as the man who was in overall charge of the Liddy-Hunt group in the White House. This group was nicknamed the "plumbers."

The Washington Post story dated December 20, 1972, alleged that Mardian and Frederick LaRue, another former White House counsel and Special Assistant to John Mitchell, who was the campaign chairman for the Nixon re-election committee, directed a mass "house-cleaning" after the Watergate break-in in which financial records were destroyed. According to the press, the destroyed records included memoranda describing wiretapped telephone conversations of Democratic Party officials at the Watergate. The memoranda allegedly each began with the phrase "Confidential informant says." Other records destroyed reportedly included a list showing the three top Nixon campaign officials who withdrew about $300,000 from a secret fund earmarked for sensitive political projects. Also destroyed, according to the news story, were seven ledger books listing campaign contributors and the amount they gave before April 7, 1972, the effective date of the new law requiring full disclosure. The story went on to say that among those who participated in the destruction of committee records was Robert Odle, personnel director of the Nixon re-election committee. Odle 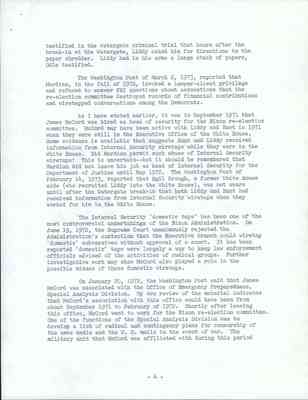 testified in the Watergate criminal trial that hours after the break-in at the Watergate, Liddy asked him for directions to the paper shredder. Liddy had in his arms a large stack of papers, Odle testified.

The Washington Post of March 2, 1973, reported that Mardian, in the fall of 1972, invoked a lawyer-client privilege and refused to answer FBI questions about accusations that the re-election committee destroyed records of financial contributions and wiretapped conversations among the Democrats.

As I have stated earlier, it was in September 1971 that James McCord was hired as head of security for the Nixon re-election committee. McCord may have been active with Liddy and Hunt in 1971 when they were still in the Executive Office of the White House. Some evidence is available that suggests Hunt and Liddy received information from Internal Security wiretaps while they were in the White House. This is uncertain -- but it should be remembered that Mardian did not leave his job as head of Internal Security for the Department of Justice until May 1972. The Washington Post of February 14, 1973, reported that Egil Krough, a former White House aide (who recruited Liddy into the White House), was not aware until after the Watergate break-in that both Liddy and Hunt had received information from Internal Security wiretaps when they worked for him in the White House.

The Internal Security "domestic taps" has been one of the most controversial undertakings of the Nixon Administration. On June 19, 1972, the Supreme Court unanimously rejected the Administration's contention that the Executive branch could wiretap "domestic" subversives without approval of a court. It has been reported "domestic" taps were largely a way to keep law enforcement officials advised of the activities of radical groups. Further investigative work may show McCord also played a role in the possible misuse of these domestic wiretaps.

On January 20, 1972, the Washington Post said that James McCord was associated with the Office of Emergency Preparedness, Special Analysis Division. My own review of the material indicates that McCord's association with this office would have been from about September 1971 to February of 1972. Shortly after leaving this office, McCord went to work for the Nixon re-election committee. One of the functions of the Special Analysis Division was to develop a list of radical and contingency plans for censorship of the news media and the U. S. mails in the event of war. The military unit that McCord was affiliated with during this period