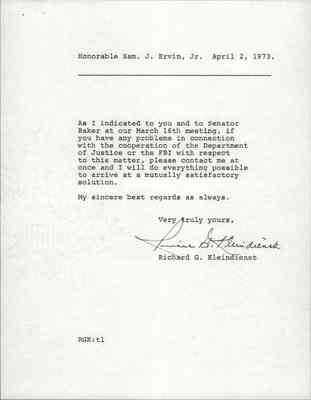 As I indicated to you and to Senator Baker at our March 16th meeting, if you have any problems in connection with the cooperation of the Department of Justice or the FBI with respect to this matter, please contact me at once and I will do everything possible to arrive at a mutually satisfactory solution.

My sincere best regards as always, 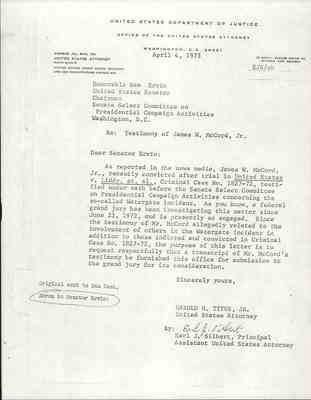 OFFICE OF THE UNITED STATES ATTORNEY

IN REPLY, PLEASE REFER TO INITIALS AND NUMBER EJS/eh

As reported in the news media, James W. McCord, Jr., recently convicted after trial in United States v. Liddy, et. al., Criminal Case No. 1827-72, testified under oath before the Senate Select Committee on Presidential Campaign Activities concerning the so-called Watergate incident. As you know, a federal grand jury has been investigating this matter since June 23, 1972, and is presently so engaged. Since the testimony of Mr. McCord allegedly related to the involvement of others in the Watergate incident in addition to those indicted and convicted in Criminal Case No. 1827-72, the purpose of this letter is to request respectfully that a transcript of Mr. McCord's testimony be furnished this office for submission to the grand jury for its consideration. 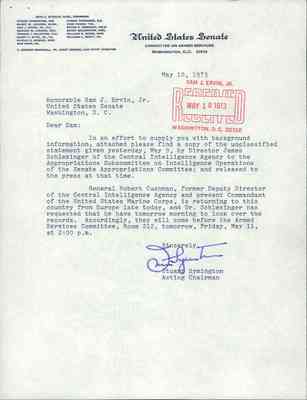 In an effort to supply you with background information, attached please find a copy of the unclassified statement given yesterday, May 9, by director James Schlesinger of the Central Intelligence Agency to the Appropriations Subcommittee on Intelligence Operations of the Senate Appropriations Committee; and released to the press at that time.

General Robert Cushman, former Deputy Director of the Central Intelligence Agency and present Commandant of the United States Marine Corps, is returning to this country from Europe late today, and Dr. Schelsinger has requested that he have tomorrow morning to look over the records. Accordingly, they will come before the Armed Services Committee, Room 212, tomorrow, Friday, May 11, at 2:00 p.m. 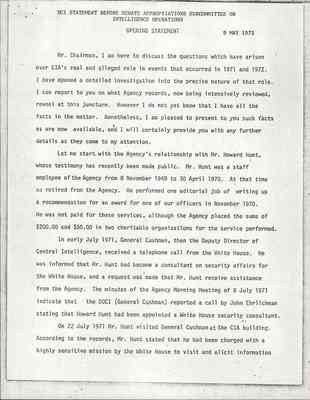 Mr. Chairman, I am here to discuss the questions which have arisen over CIA's real and alleged role in events that occurred in 1971 and 1972. I have opened a detailed investigation into the precise nature of that rile. I can report to you on what Agency records, now being intensively reviewed, reveal at this juncture. However I do not yet know that I have all the facts in the matter. Nonetheless, I am pleased to present to you such facts as are now available, and I will certainly provide you with any further details as the come to my attention.

Let me start with the Agency's relationship with Mr. Howard Hunt, whose testimony has recently been made public. Mr. Hunt was a staff employee of the Agency from 8 November 1949 to 30 April 1970. At the time he retired from the Agency. He performed one editorial job of writing up a recommendation for an award for one of our offices in November 1970. He was not paid for the services, although the Agency places the sums of $200.00 and $50.00 in two charitable organizations for the service performed.

In early July 1971, General Cushman, then the Deputy Director of Central Intelligence, recieved a telephone call from the White House. He was informed that Mr. Hunt become a consultant on security affairs for the White House, and a request was made that Mr. Hunt recieve asisstance from the Agency. The minuted of the Agency Morning Meeting of 8 July 1971 indicate that the DDCI (General Cushman) reported a call by John Ehrlichman stating that Howard Hunt had been appointed a White House security consultant.

On 22 July 1971 Mr. Hunt visited General Cushman at the CIA building. According to records, Mr. Hunt stated that he had been charged with a highly sensitive mission by the White House to visit and elicit information 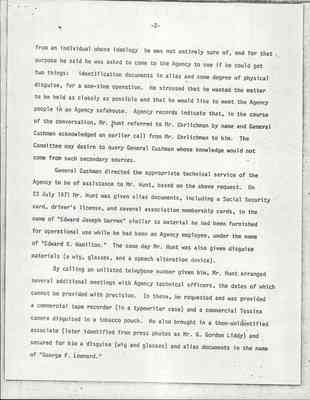 from an individual whose ideology he was not entirely sure of, and for that purpose he said he was asked to come to the Agency to see if he could get two things: identification documents in alias and some degree of physical disguise, for a one-time operation. He stressed that he wanted the matter to be held as closely as possible and that he would like to meet the Agency people in an Agency safehouse. Agency records indicate that, in the course of the conversation, Mr. Hunt referred to Mr. Ehrlichman by name and General Cushman acknowledged an earlier call from Mr. Ehrlichman to him. The Committee may desire to query General Cushman whose knowledge would not come from such secondary sources.

General Cushman directed the appropriate technical service of the Agency to be of assistance to Mr. Hunt, based on the above request. On 23 July 1971 Mr. Hunt was given alias documents, including a Social Security card, driver's license, and several association membership cards, in the name of "Edward Joseph Warren" similar to material he had been furnished for operational use while he has been an Agency employee, under than name of "Edward V. Hamilton." The same day Mr. Hunt was also given disguise materials (a wig, glasses, and a speech alteration device).

By calling an unlisted telephone number given him, Mr. Hunt arranged several additional meetings with Agency technical officers, the dates of which cannot be provided with precision. In these, he requested and was provided a commercial tape recorder (in a typewriter case) and a commercial Tessina camera disguised in a tobacco pouch. He also brought in a then-unidentified associate (later identified from press photos as Mr. G. Gordon Liddy) and secured for him a disguise (Wig and glasses) and alias documents in the name of "George F. Leonard."