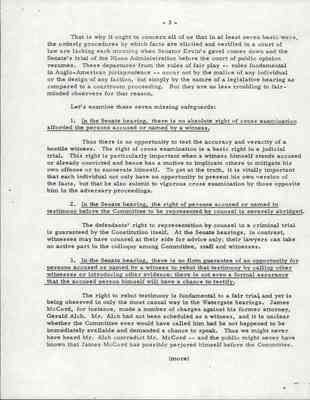 That is why it ought to concern all of us that in at least seven basic ways, the orderly procedures by which facts are elicited and verifified in a court of law are lacking each morning when Senator Ervin's gavel comes down and the Senate's trial of the Nixon Administration before the court of public opinion resumes. These departures from the rules of fair play -- rules fundamental in Anglo-American jurisprudence -- occur not by the malice of any individual or the design of any faction, but simply by the nature of a legislative hearing as compared to a courtroom proceeding. But they are no less troubling to fairminded observers for that reason.

1. In the Senate hearing, there is no absolute right of cross examination afforded the persons accussed or named by a witness.

Thus there is no opportunity to test the accuracy and veracity of a hostile witness. The right of cross examination is a basic right in a judicial trial. This right is particuraly important when a witness himself stands accused or already convicted and hence has a motive to implicate other to mitigate his own offense or to exonerate himself. To get at the truth, it is vitally important that each individual not only have an opportunity to present his own version of the facts, but that he also submit to vigorous cross examination by those opposite him in the adversary proceedings.

2. In the Senate hearing, the right of persons accused or named in testimony before the Committee to be represented by counsel is severly abridged.

The defendants' right to representation by counsel in a criminal trial is guaranteed by the Constitution itself. At the Senate hearings, in contrast, witnesses may have counsel at their side for advice only; their lawyers can take no active part in the colloquy among Committee, staff and witnesses.

3. In the Senate hearing, there is no firm guarantee of an opportunity for persons accused or named by a witnesses to rebut that testimony by calling other witnesses or introducing other evidence; there is not even a formal assurance that the accused person himself will have a chance to testify.

The right to rebut testimony is fundamental to a fair trial, and yet is being observed in only the most casual way in the Watergate hearings. James McCord, for instance, made a number of charges against his former attorney, General Alch. Mr. Alch had not been scheduled as a witness, and it is unclear whether the Committee ever would have called him had he not happened to be immediately available and demanded a chance to speak. Thus we might never have heard Mr. Alch contradict Mr. McCord -- and the public might never have known that James McCord has possbily perjured himself before the Committee. 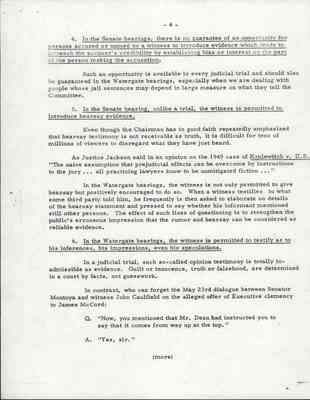 4. In the Senate hearings, there is no guarantee of an opportunity for persons accused or named by a witness to introduce evidence which trends to impeach the accuser's credibility by establishing bias or interest on the part of the person making the accusation.

Such an opportunity is available is every judicial trial and should also be guaranteed in the Watergate hearings, especially when we are dealing with people whose jail sentences may depend in large measure on what they tell the Committee.

5. In the Senate hearing, unlike a trial, the witness is permitted to introduce hearsay evidence.

Even thought the Chairman has in good faith repeatedly emphasized that hearsay testimony is not receivable as truth, it is difficult for tens of millions of viewers to disregard what they have just heard.

As Justice Jackson said in an opinion on the 1949 case of Krulewitch v. U. S. "The naive assumption that prejudicial effects can be overcome by instructions to the jury .. all practicing lawyers know to be unmitigated fiction ..."

In the Watergate hearings, the witness is not only permitted to give hearsay but positively encouraged to do so. When a witness testifies to what some third part told him, he frequently is then asked to elaborate on details of the hearsay statement and pressed to say whether his informant mentioned still other persons. The effect of such lines of questioning is to strengthen the public's erroneous impression that the rumor and hearsay can be considered as reliable evidence.

6. In the Watergate hearings, the witness is permitted to testify as to his inferences, his impressions, even his speculations.

In a judicial trial, such so-called opinion testimony is totally inadmissable as evidence. Guilt or innocence, truth or falsehood, are determined in a court by facts, not guesswork.

In contrast, who can forgt the May 23rd dialogue between Senator Montoya and witness John Caulfield on the alleged offer of Executive clemency to James McCord:

Q. "Now, you mentioned that Mr. Dean had instructed you to say that it comes from way up at the top." 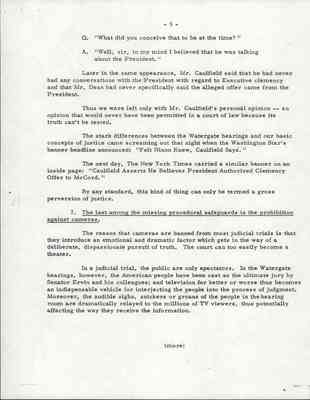 Q. "What did you conceive that to be at the time?"

A. "Well, sir, in my mind I believed that he was talking about the President."

Later in the same appearance, Mr. Caulfield said that he had never had any conversations with the President with regard to Executive clemency and that Mr. Dean had never specifically said the alleged offer came from the President.

Thus we were left only with Mr. Caulfield's personal opinion -- and opinion that would never have been permitted in a court of law because its truth can't be tested.

The stark differences between the Watergate hearings and our basic concepts of justice came screaming out that night when the Washington Star's banner headline announced: "Felt Nixon Knew, Caulfield Says."

The next day, The New York Times carried a similar banner on an inside page: "Caulfield Asserts He Believes President Authorized Clemency Offer to McCord."

By any standard, this kind of thing can only be termed a gross perversion of justice.

7. The last among the missing procedural safegaurds is the prohibition against cameras.

The reason that cameras are banned from most judicial trials is that they introduce an emotional and dramatic factor which gets in the way of a deliberate, dispassionate pursuit of truth. The court can too easily became a theater.

In a judicial trial, the public are only spectators. In the Watergate hearings, however, the American people have been cast as the ultimate jury by Senator Ervin and his colleagues; and television for better or worse thus becomes an indispensable vehicle for interjecting the peopl einto the process of judgement. Moreover, the audible sighs, snickers or groans of the people in the hearing room are dramatically relayed to the millions of TV viewers, thus potentially affecting the way they receive the information. 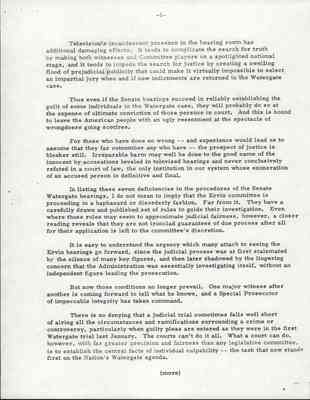 Television's incandescent presence in the hearing room has additional damaging effects. It tends to complicate the search for truth by making both witnesses and Committee players on a spotlighted national stage, and it tends to impede the search for justice by creating a swelling flood of prejudicial publicity that could make it virtually impossible to select an impartial jury when and if new indictments are returned in the Watergate case.

Thus even if the Senate hearings succeed in reliably establishing the guilt of some individuals in the Watergate case, they will probably do so at the expense of ultimate conviction of those persons in court. And this is bound to leave the American people with an ugly resentment at the spectacle of wrongdoers going soctfree.

For those who have done no wrong -- and experience would lead us to assume that they far outnumber any who have -- the prospect of justice is bleaker still. Irrepareble harm may well be done to the good name of the innocent by accusations leveled in televised hearings and never conclusively refuted in a court of law, the only institution in our system whose exoneration of an accused person is definitive and final.

In listing these seven deficiencies in the procedures of the Senate Watergate hearings, I do not mean to imply that the Ervin committee is proceeding in a haphazard or disorderly fashion. Far from it. They have a carefully drawn and published set of rules to guide their investigation. Even where those rules may seem to approximate judicial fairness, however, a closer reading reveals that they are not ironclad guarantees of due process after all for their application is left to the committee's discretion.

It is easy to understand the urgency which many attach to seeing the Ervin hearings go forward, since the judicial process was at first stalemeted by the silence of many key figures, and then later shadowed by the lingering concern that the Administration was essentially investigating itself, without an independent figure leading the prosecution.

But now those conditions no longer prevail. One major witness after another is coming forward to tell what he knows, and a Special Prosecutor of impeccable integrity has taken command.

There is no denying that a judicial trial sometimes falls well short of airing all the circumstances and ramifications surrounding a crime or controversy, particuraly when guilty pleas are entered as they were in the first Watergate trial last January. The courts can't do it all. What a court can do, however, with far greater precision and fairness than any legislative committee, is to establish the central facts of individual culpability -- the task that now stands first on the Nation's Watergate agenda. 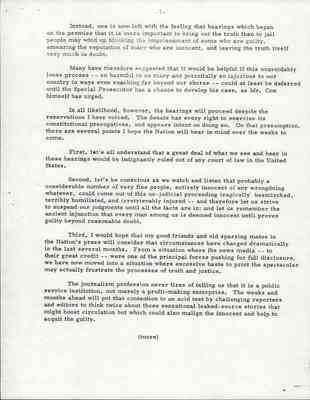 Instead, one is now left with the feeling that hearings which began on the premise that it is more important to bring out the truth than to jail people may wind up blocking the imprisonment of some who are guilty, smearing the reputation of many who are innocent, and leaving the truth itself very much in doubt.

Many have therefore suggessted that it would be helpful if this unavoidably loose process -- so harmful to so many and potentially so injuriuos to our country in ways even reaching far beyond our shores -- could at least be deferred until the Special Prosecutor has a chance to develop his case, as Mr. Cox himself has urged.

In all liklihood, however, the hearings will proceed despite the reservations I have voiced. The Senate has every right to exercise its constitutional pereogatives, and appears intent on doing so. On that presumption, there are several points I hope the Nation will bear in mind over the weeks to come.

First, let's all understand that a great deal of what we see and hear in these hearings would be indignantly ruled out of any court of law in the United States.

Second, let's be concious as we watch and listen that probably a considerable number of very fine people, entirely innocent of any wrongdoing whatever, could come out of this un-judicial proceeding tragically besmirched, terribly humiliated, and irretrievable injured -- and therefore let us strive to suspend our judgements until all the facts are in; and let us remember the ancient injunction that every man among us is deemed innocent until proven guilty beyond reasonable doubt.

Third, I would hope that my good friends and old sparring mates in the Nation's press will consider that circumstances have changed dramatically in the last several months. From a situation where the news media -- to their great credit -- were one of the principal forces pushing for full disclosure, we have now moved into a situation where excessive haste to print the spectacular may actually frustrate the processes of truth and justice.

The journalism profession never tires of telling us that it is a public service institution, not merely a profit-making enterprise. The weeks and months ahead will put that contention to an acid test by challenging reporters and editors to think twice about those sensational leaked-source stories that might boost circulation but which could also malign the innocent and help to acquit the guilty.