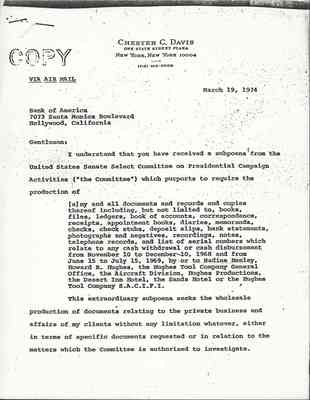 [a]ny and all documents and records and copies thereof including, but not limited to, books, files, ledgers book of accounts, correspondence, receipts, appointment books, diaries, memoranda, checks, check stubs, deposit slips, bank statements, photographs and negatives, recordings, notes, telephone records, and list of serial numbers which relate to any cash withdrawal or cash disbursement from November 10 to December 10, 1968 and from June 15 to July 15, 1969, by or to Nadine Henley, Howard R. Hughes, the Hughes Tool Company General Office, the Aircraft Division, Hughes Productions, the Desert Inn Hotel, the Sands Hotel or the Hughes Tool Company S.A.C.I.F.I.

This extraordinary subpoena seeks the wholesale production of documents relating to the private business and affairs of my clients without any limitation whatever, either in terms of specific documents requested or in relation to the matters which the Committee is authorized to investigate. 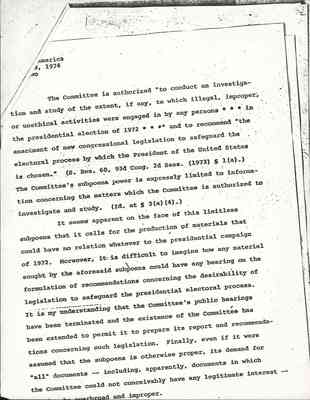 The Committee is authorized "to conduct an investigation and study of the extent, if any, to which illegal, improper, or unethical activities were engaged in by any persons * * * in the presidential election of 1972 * * * and to recommend "the enactment of new congressional legislation to safeguard the electoral process by which the President of the United States is chosen." (S. Res. 60, 93d Cong. 2d Sess. (1973) [s?] 1(a).) The Committee's subpoena power is expressly limited to information concerning the matters which the Committee is authorized to investigate and study. (Id at [s?] 3(a) (4).)

It seems apparent on the face of this limitless subpoena that it calls for the production of materials that could have no relation whatever to the presidential campaign of 1972. Moreover, it is difficult to imagine how any material sought by the aforesaid subpoena could have any bearing on the formulation of recommendations concerning the desirability of legislation to safeguard the presidential electoral process. It is my understanding that the Committee's public hearings have been terminated and the existence of the Committee has been extended to permit it to prepare its report and recommendations concerning such legislation. Finally, even if it were assumed that the subpoena is otherwise proper, its demand for "all" documents -- including, apparently, documents in which the Committee could not conceivably have any legitimate interest -- [illegible] overbroad and improper. 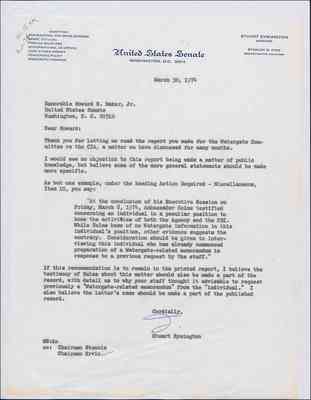 Thank you for letting me read the report you made for the Watergate Committee re the CIA, a matter we have discussed for many months.

I would see no objection to this report being made a matter of public knowledge, but believe some of the more general statements should be made more specific.

As but one example, under the heading Action Required - Miscellaneous, Item 10, you say:

"At the conclusion of his Executive Session on Firday, March 8, 1974, Ambassador Helms testified concerning an individual in a peculiar position to know the activities of both the Agency and the FBI. While Helms knew of no Watergate information in this individual's position, other evidence suggests the contrary. Consideration should be given to interviewing this individual who has already commenced preperation of a Watergate-related memorandum in response to a previous request by the staff."