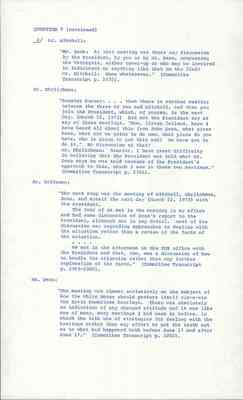 "Mr. Dash: At that meeting was there any discussion by the President, by you or by Mr. Dean, concerning the Watergate, either the cover-up or who may be involved in indictment or anything like that on the 22nd? Mr. Mitchell: None whatsoever." (Committee Transcript p. 1635).

"Senator Gurney: ... then there is another meeting between the three of you and Mitchell, and then you join the President, which, of course, is the next day. (March 22, 1973) Did not the President say at any of these meetings, "Nose, listen fellows, here I have heard all about this from John Dean, what gives here, what are we going to do now, what plans do you have, who is going to get this out? We have got to do it." No discussion of that?

Mr. Ehrlichman: Senator, I have greatdifficulty in believing that the President was told what Mr. Dean says he was told because of the President's approach to this, which I saw in these two meetings." (Committee Transcript p. 2746).

"The next step was the meeting of Mitchell, Ehrlichman, Dean, and myself the next day (March 22, 1973) with the President.

The four of us met in the morning in my office and had some discussion of Dean's report to the President, although not in any detail. Most of the discussion was regarding approahes to dealing with the situation rather than a review of the facts of the situation.

We met in the afternoon in the EOB office with the President and that, too, was a discussion of how to handle the situation rather than any further exploration of the facts." (Committee Transcript p. 2989-2900).

"The meeting was almost exclusively on the subject of how the White House should posture itself vis-a-vis the Ervin Committee hearings. There was absolutely no indication fo any changed attitude and it was like one of many, many meetings I had been in before, in which the talk was of strategies for dealing with the hearings rather than any effort to get the truth out as to what had happened both before June 17 and after June 17." (Committee Transcript p. 1002). 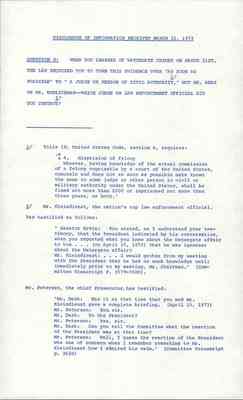 QUESTION 8: WHEN YOU LEARNED OF WATERGATE CRIMES ON MARCH 21ST, THE LAW REQUIRED YOU TO TURN THIS EVIDENCE OVER "AS SOON AS POSSIBLE" TO " A JUDGE OR PERSON OF CIVIL AUTHORITY," NOT MR. DEAN OR MR. EHRLICHMAN--WHICH JUDGE OR LAW ENFORCEMENT OFFICIAL DID YOU CONTACT?

"[s?] 4. Misprision of felony Whoever, having knowledge of the actual commission of a felony cognizable by a court of the United States, conceals and does not as soon as possible make known the same to some judge or other person in civil or military authority under the United States, shall be fined not more than $500 or imprisoned not more than three years, or both."

Mr. Kleindienst: ... I would gather from my meeting with the President that he had no such knowledge until immediately prior to my meeting, Mr. Chairman." (Committee Transcript P. 3579-3580). 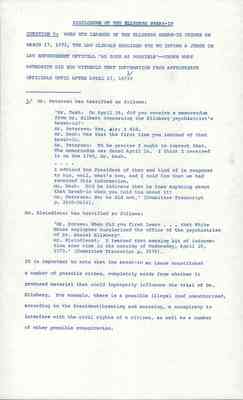 DISCLOSURE OF THE ELLSBERG BREAK-IN

QUESTION 9: WHEN YOU LEARNED OF THE ELLSBERG BREAK-IN CRIMES ON MARCH 17, 1973, THE LAW CLEARLY REQUIRED YOU TO INFORM A JUDGE OR LAW ENFORCEMENT OFFICIAL "AS SOON AS POSSIBLE"--UNDER WHAT AUTHORITY DID YOU WITHHOLD THAT INFORMATION FROM APPROPRIATE OFFICIALS UNTIL AFTER APRIL 17, 1973?

1 Mr. Petersen has testified as follows:

Mr. Dash: On April 16, did you receive a memorandum from Mr. Silbert concerning the Ellsberg psychiatrist's break-in?" Mr. Petersen: Yes, sir; I did. Mr. Dash: Was that the first time you learned of that break-in. Mr. Petersen: To be precise I ought to correct that. The memorandum was dated April 16. I think I received it on the 17th, Mr. Dash. .... I advised the President of that and kind of in response to his, well, what's new, and I told him that we had received this information. Mr. Dash: Did he indicate that he knew anything about that break-in when you told him about it? Mr. Petersen: No; he did not." (Committee Transcript p. 3630-3631).

Mr. Kleindienst has testified as follows:

Mr. Dorsen: When did you first learn... that White House employees burglarized the office of the psychiatrist of Dr. Daniel Ellsberg? Mr. Kleindienst: I learned that amazing bit of information some time in the morning of Wednesday, April 25, 1973." (Committee Transcript p. 3574).

It is important to note that the break-in at issue constituted a number of possible crimes, completely aside from whether it produced material that could improperly influence the trial of Dr. Ellsberg. For example, there is a possible illegal (and unauthorized, according to the President)breaking and entering, a conspiracy to interfere with the civil rights of a citizen, as well as a number of other possible conspiracies. 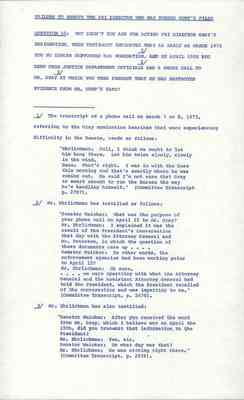 FAILURE TO REMOVE THE FBI DIRECTOR WHO HAD BURNED HUNT'S FILES

QUESTION 10: WHY DIDN'T YOU ASK FOR ACTING FBI DIRECTOR GRAY'S RESIGNATION, WHEN TESTIMONY INDICATES THAT AS EARLY AS MARCH 1973 YOU NO LONGER SUPPORTED HIS NOMINATION, AND BY APRIL 15TH YOU KNEW FROM JUSTICE DEPARTMENT OFFICIALS AND A PHONE CALL TO MR. GRAY AT WHICH YOU WERE PRESENT THAT HE HAD DESTROYED EVIDENCE FROM MR. HUNT'S SAFE?

1 The transcript of a phone call on March 7 or 8, 1973, referring to the Gray nomination hearings that were experiencing difficulty in the Senate, reads as follows:

"Ehrlichman: Well, I think we ought to let him hang there. Let him twist slowly, slowly in the wind. Dean: That's right. I was in with the boss this morning and that's exactly where he was coming out. He said I'm not sure that Gray is smart enough to run the Bureau the way he's handling himself." (Committee Transcript p. 2787).

2 Mr. Ehrlichman has testified as follows: 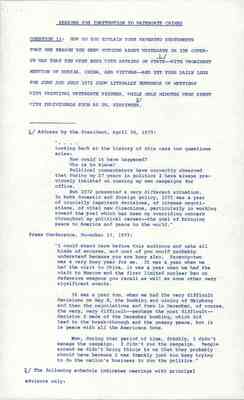 REASONS FOR INATTENTION TO WATERGATE CRIMES

OUESTION 11: HOW DO YOU EXPLAIN YOUR REPEATED STATEMENTS THAT ONE REASON YOU KNEW NOTHING ABOUT WATERGATE OR ITS COVERUP WAS THAT YOU WERE BUSY WITH AFFAIRS OF STATE--WITH PROMINENT MENTION OF RUSSIA, CHINA, AND VIETNAM--AND YET YOUR DAILY LOGS FOR JUNE AND JULY 1972 SHOW LITERALLY HUNDREDS OF MEETINGS WITH PRINCIPAL WATERGATE FIGURES, WHILE ONLY MINUTES WERE SPENT WITH INDIVIDUALS SUCH AS DR. KISSINGER.

".... Looking back at the history of this case two questions arise:

How could it have happened?

Who is to blame?

Political commentators have correctly observed that during my 27 years in politics I have always previously insisted on running my own campaigns for office.

But 1972 presented a very different situation. In both domestic and foreig policy, 1972 was a year of crucially important decisions, of intense negotiations, of vital new directions, particularly in work toward the goal which has been my overriding concern throughout my political career--the goal of bringing peace to America and peace to the world."

It was a year too, when we had the very difficult decisions on May 8, the bombing and mining of Haiphong and then the negotiations and then in December, of course the very, very difficult--perhaps the most difficult-- decision I made of the December bombing, which did lead to the break-through and the uneasy peace, but it is peace with all the Americans home.

Now, during that period of time, frankly, I didn't manage the campaign. I didn't run the campaign. People around me didn't bring things to me that they probably should have because I was frankly just too busy trying to do the nation's business to run the politics."

2 The following schedule indicates meetings with principal advisors only: