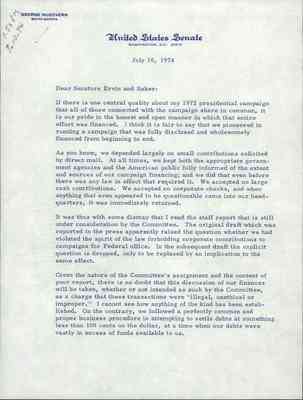 If there is one central quality about my 1972 presidential campaign that all of those connected with the campaign share in common, it is our pride in the honest and open manner in which that entire effort was financed. I think it is fair to say that we pioneered in running a campaign that was fully disclosed and wholesomely financed from beginning to end.

As you know, we depended largely on small contributions solicited by direct mail. At all times, we kept both the appropriate government agencies and the American public fully informed of the extent and sources of our campaign financing; and we did that even before there was any law in effect that required it. We accepted no large cash contributions. We accepted no corporate checks, and when anything that even appeared to be questionable came into our headquarters, it was immediately returned.

It was thus with some dismay that I read the staff report that is still under consideration by the Committee. The original draft which was reported in the press apparently raised the question whether we had violated the spirit of the law forbidding corporate contributions to campaigns for Federal office. In the subsequent draft the explicit question is dropped, only to be replaced by an implication to the same effect.

Given the nature of the Committee's assignment and the context of your report, there is no doubt that this discussion of our finances will be taken, whether or not intended as such by the Committee, as a charge that these transactions were "illegal, unethical or improper." I cannot see how anything of the kind has been established. On the contrary, we followed a perfectly common and proper business procedure in attempting to settle debts at something less than 100 cents on the dollar, at a time when our debts were vastly in excess of funds available to us. 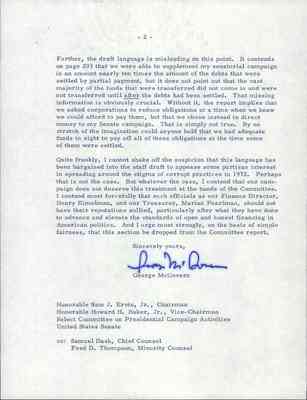 Further, the draft language is misleading on this point. It contends on page 203 that we were able to supplement my senatorial campaign in an amount nearly ten times the amount of the debts that were settled by partial payment, but it does not point out that the vast majority of the funds that were transferred did not come in and were not transferred until after the debts had been settled. That missing information is obviously crucial. Without it, the report implies that we asked corporations to reduce obligations at a time when we knew we could afford to pay them, but that we chose instead to direct money to my Senate campaign. That is simply not true. By no stretch of the imagination could anyone hold that we had adequate funds in sight to pay off all of these obligations at the time some of them were settled.

Quite frankly, I cannot shake off the suspicion that this language has been bargained into the staff draft to appease some partisan interest in spreading around the stigma of corrupt practices in 1972. Perhaps that is not the case. But whatever the case, I contend that our campaign does not deserve this treatment at the hands of the Committee. I contend most forcefully that such officials as our Finance Director, Henry Kimelman, and our Treasurer, Marian Pearlman, should not have their reputations sullied, particularly after what they have done to advance and elevate the standards of open and honest financing in American politics. And I urge most strongly, on the basis of simple fairness, that this section be dropped from the Committee report. 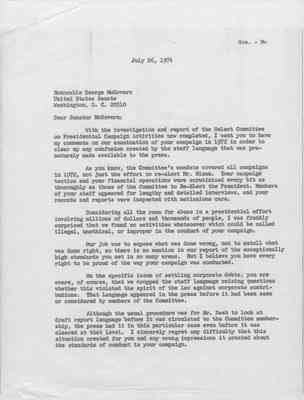 With the investigation and report of the Select Committee on Presidential Capaign Activities now completed, I want you to have my comments on our examination of your campaign in 1972 in order to clear up any confusion created by the staff language that was pre- maturely made available to the press.

As you know, the Committee's mandate covered all campaigns in 1972, not just the effort to re-elect Mr. Nixon. Your campaign tactics and your financial operations were scrutinized every bit as thoroughly as those of the Committee to Re-Elect the President. Members of your staff appeared for lengthy and detailed interviews, and your records and reports were inspected with meticulous care.

Considering all the room for abuse in a presidential effort involving millions of dollards and throusands of people, I was frankly surprised that we found no activities whatsoever which could be called illegal, unethical, or improper in the conduct of your campaign.

Our job was to expose what was done wrong, not to extoll what was done right, so there no mention in our report of the exceptional high standards you set in so many areas. But I believe you have every right to be proud of the way your campaign was conducted.

On the specific issue of settling corporate debts, you are aware, of course, that we dropped the staff language raising questions whether this violated the spirit of the law against corporate contributions. That language appeared in the press before it had been seen or considered by members of the Committee.

Although the usual procedure was for Mr. Dash to look at draft report language before it was circulated to the Committee membership, the press had it in this particular case even before it was cleared at that level. I sincerely regret any difficulty that this situation created for you and any wrong impressions it created about the standards of conduct in your campaign. 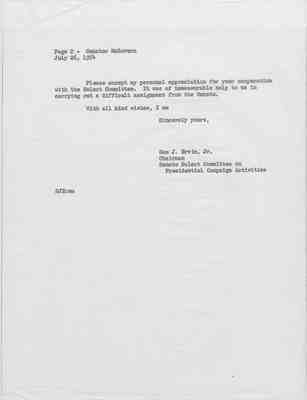 Please accept my personal appreciation for your cooperation with the Select Committe. It was of immeasurable help to us in carrying out a difficult assignment from the Senate.

With all kind wishes, I am