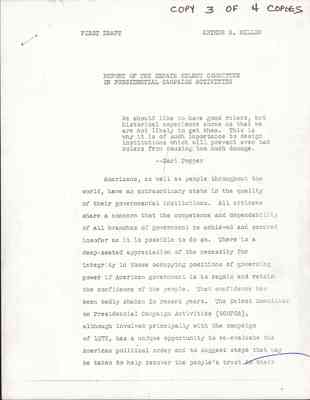 REPORT OF THE SENATE SELECT COMMITTEE ON PRESIDENTIAL CAMPAIGN ACTIVITIES

We should like to have good rulers, but historical experience shows us that we are not likely to get them. This is why it is of such importance to design institutions which will prevent even bad rulers from causing too much damage.

Americans, as well as people throughout the world, have an extraordinary stake in the quality of their governmental institutions. All citizens share a concern that the competence and dependability of all branches of government be achieved and secured insofar as it is possible to do so. There is a deep-seated appreceation of the necessity for integrity in those occupying positions of governing power if American government is to regain and retain the confidence of the people. That confidence has been badly shaken in recent years. The Select Committee on Presidential Campaign Activities (SCOPA), although involved principally with the campaign of 1972, has a unique opportunity to re-evaluate the American political order and to suggest steps that may be taken to help recover the people's trust in their 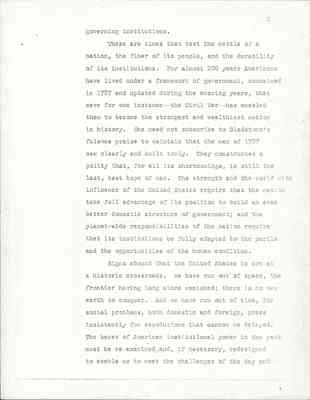 These are times that test the mettle of a nation, the fiber of its people, and the durability of its institutions. For almost 200 years Americans have lived under a framework of government, conceived in 1787 and updated during the ensuing years, that save for one instance -- the Civil War -- has enabled them to become the strongest and wealthiest nation in history. One need not subscribe to Gladstone's fulsome praise to maintain that the men of 1787 saw clearly and built truly. They constructed a policy that, for all its shortcomings, is still the last, best hope for man. The strength and the world-wide influence of the United States require that the nation take full advantage of its position to build an even better domestic structure of government; and the planet-wide responsibilities of the nation require that its institutions be fully adapted to the perils and the opportunities of the human condition.

Signs abound that the United States is now at a historic crossroads. We have run out of space, the frontier having long since vanished; there is no new earth to conquer. And we have run out of time, for social problems, both domestic and foreign, press insistantly for resolutions that cannot be delayed. The bases of American institutional power in the past must be re-examined and, if necessary, redesigned to enable us to meet the challenges of the day and-- 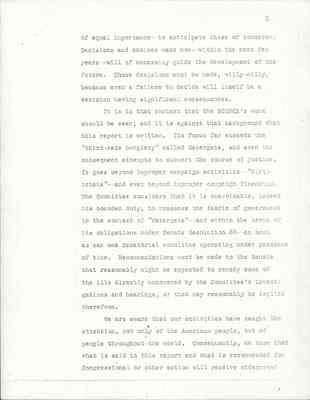 of equal importance -- to anticipate those of tomorrow. Decisions and choices made now--within the next few years--will of necessity guide the development of the future. Those decisions must be made, willy-nilly, because even a failure to decide will itself be a decision having significant consequences.

It is in that context that the SCOPA's work should be seen; and it is against that background that this report is written. Its focus far exceeds the "third-rate burglary" called Watergate, and even the subsequent attempts to subvert the course of justice. It goes beyond improper campaign activities--"dirty tricks"-- and even beyond improper campaign financing. The Committee considers that it is unavoidable, indeed its bounden duty, to reassess the fabric of government in the context of "Watergate"--and within the terms of its obligations under Senate Resolution 60--as best as can one Senatorial committee operating under pressure of time. Recommendations must be made to the Senate that reasonably might be expected to remedy some of the ills directly uncovered by the Committee's investigations and hearings, or that may reasonably by implied therefrom.

We are aware that our activities have caught the attention, not only of the American people, but of people throughout the world. Consequently, we know that what is said in this report and what is recommended for Congressional or other action will receive widespread 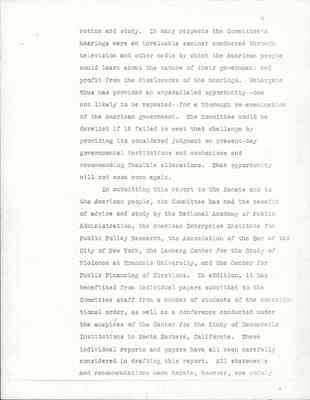 notice and study. In many respects the Committee's hearings were an invaluable seminar conducted through television and other media by which the American people could learn about the nature of their government and profit from the disclosures of the hearings. Watergate thus has provided an unparalleled opportunity--one not likely to be repeated--for a thorough re-examination of the American government. The Committee would be derelict if it failed to meet that challenge by providing its considered jusgement on present-day governmental institutions and mechanisms and recommending feasible alterations. That opportunity will not soon come again.

In submitting this report to the Senate and to the American people, the Committee has had the benefit of advice and study by the National Academy of Public Administration, the American Enterprise Institute for Public Policy Research, the Association of the Bar of the City of New York, the Lemberg Center for the Study of Violence at Brandeis University, and the Center for Public Financing of Elections. In addition, it has benefitted from individual papers submitted to the Committee staff from a number of students of the constitutional order, as well as a conference conducted under the auspices of the Center for the Study of Democratic Institutions in Santa Barbara, California. These individual reports and papers have all been carefully considered in drafting this report. All statements and recommendations made herein, however, are solely 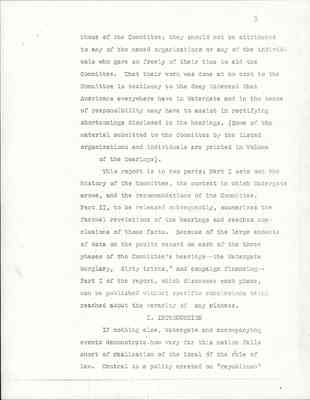 This report is in two parts: Part I sets out the history of the Committee, the context in which Watergate arose, and the recommendations of the Committee. Part II, to be released subsequently, summarizes the factual revelations of the hearings and reaches conclusions of those facts. Because of the large amounts of data on the public record on each of the three phases of the Committee's hearings--the Watergate burglary, dirty tricks," and campaign financing-- Part I of the report, which discusses each phase, can be published without specific conclusions being reached about the veracity of any witness.

If nothing else, Watergate and accompanying events demonstrate how very far this nation falls short of realization of the ideal of the rule of law. Central to a polity created on "republican"