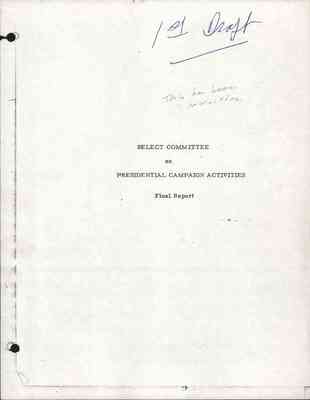 [handwiritten "This has been rewritten"] 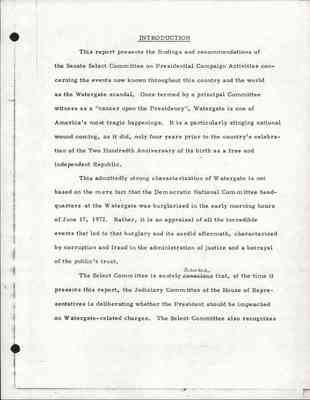 This report presents the findings and recommendations of the Senate Select Committee on Presidential Campaign Activities concerning the events now known throughout this country and the world as the Watergate scandal. Once termed by a principal Committee witness as a "cancer upon the Presidency", Watergate is one of America's most tragic happenings. It is a particularly stinging national wound coming, as it did, only four years prior to the country's celebration of the Two Hundredth Anniversary of its birth as a free and independent Republic.

This admittedly strong characterization of Watergate is not based on the mere fact that the Democratic National Committee headquarters at the Watergate was burglarized in the early morning hours of June 17, 1972. Rather, it is an appraisal of all the incredible events that led to the burglary and its sordid afternath, characterized by corruption and fraud in the administration of justic and a betrayal of the public truast. 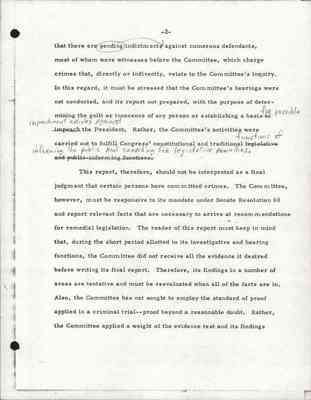 that there are pending indictm ent against numerous defendants, most of whom were witnesses before the Committee, which charge crimes that, directly or indirectly, relate to the Committee's inquiry. In this regard, it must be stressed that the Committee's hearings were not conducted, and its report not prepared, with the purpose of determining the guilt or innocence of any person or establishing a basis for possible impeachment articles against the President. Rather, the Committee's activities were carried out to fulfill Congress' constitutional and traditional functions of informing the public and searching for legislative remedies.

This report, therefore, should not be interpreted as a final judgment that certain persona have committed crimes. The Committee, however, must be responsive to its mandate under Senate Resolution 60 and report relevant facts that are necessary to arrive at recommendations for remedial legislation. The reader of this report must keep in mind that, during the short period allotted to its investigative and hearing functions, the Committee did not receive all the evidence it desired before writing its final report. Therefore, its findings in a number of areas are tentative and must be reevaluated when all of the facts are in. Also, the Committee has not sought to employ the standard of proof applied in a criminal trial--proof beyond a reasonable doubt. Rather, the Committee applied a weight of the evidence test and its findings 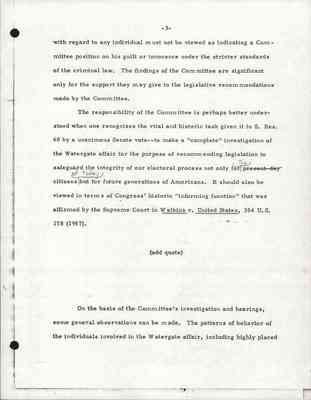 with regard to any individual must not be viewed as indicating a Committee position on his guilt or innocence under the stricter standards of the criminal law. The findings of the Committee are significant only for the support they may give to the legislative recommendations made by the Committee.

The responsibility of the Committee is perhaps better understood when one recognizes the vital and historic task given it is S. Res. 60 by a unanimous Senate vote--to make a "complete" investigation of the Watergate affair for the purpose of recommending legislation to safeguard the integrity of our electroal process not only for the citizens of today but for future generations of Americans. It should also be viewed in terms of Congress' historic "informing function" that was affirmed by the Supreme Court in Watkins v. United States, 354 U.S. 178 (1957).

On the basis of the Committee's investigation and hearings, some general observations can be made. The patterns of behavior of the individuals involved in the Watergate affair, including highly placed 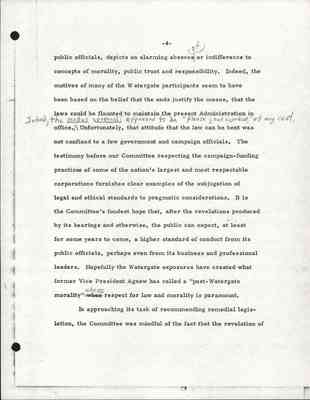 public officials, depicts an alarming absence of or indifference ot concepts of morality, public trust and responsibilities. Indeed, the motives of many of the Watergate participants seem to have been based on the belief that the ends justify the means, that the laws could be flaunted to maintain the present Administration in office. Indeed, the modus oporendi appeared to be "please your superior," at any cost. Unfortunately, that attitude that the law can be bent was not confined to a few government and campaign officials. The testimony before our Committee respecting the campaign-funding practices of some of the nation's largest and most respectable corporations furnishes clear examples of the subjugation of legal and ethical standards to pragmatic considerations. It is the Committee's fondest hope that, after the revelations produced by its hearings and otherwise, the public can expect, at least for some years to come, a higher standard of conduct from its public officials, perhaps even from its business and professional leaders. Hopefully the Watergate exposures have created what former Vice President Agnew has called a "post-Watergate morality" where respect for law and morality is paramount.

In approaching its task of recommending remedial legislation, the Committee was mindful of the fact that revelation of