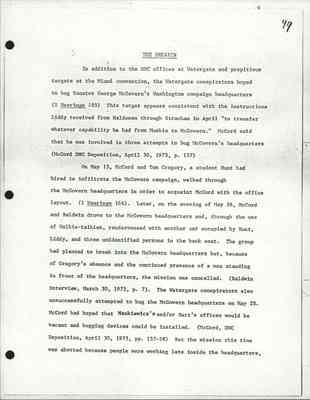 In addition to the DNC offices at Watergate and propitious targets at the Miami convention, the Watergate conspirators hoped to bug Senator George McGovern's Washington campaign headquarters (1 Hearings 185) This target appears consistent with the instructions Liddy received from Haldeman through Strachan in April "to transfer whatever capability he had from Muskie to McGovern." McCord said that he was involved in three attempts to bug McGovern's headquarters (McCord DNC Deposition, April 30, 1973, p. 157)

On May 15, McCord and Tom Gregory, a student Hunt had hired to infiltrate the McGovern campaign, walked through the McGovern headquarters in order to acquaint McCord with the office layout. (1 Hearings 164). Later, on the evening of May 26, McCord and Baldwin drove to the McGovern headquarters and, through the use of Walkie-talkies, rendezvoused with another car occupied by Hunt, Liddy, and three unidentified persons in the back seat. The group had planned to break into the McGovern headquarters but, because of Gregory's absence and the continued presence of a man standing in front of the headquarters, the mission was cancelled. (Baldwin interview, March 30, 1973, p. 7). The Watergate conspirators also unsuccessfully attempted to bug the McGover headquarters on May 28. McCod had hoped that Mankiewicz's and/or Hart's offices would be vacant and bugging devices could be installed. (McCord, DNC Deposition, April 30, 1973, pp.157-58). But the mission this time was aborted because people were working late inside the headquarters, 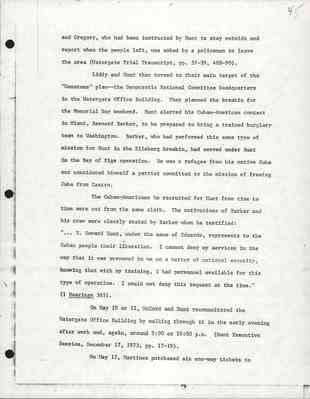 45 and Gregory, who had been instructed by Hunt to stay outside and report when the people left, was asked by a policeman to leave the area (Watergate Trial Transcript, pp. 37-39, 488-90).

Liddy and Hunt then turned to their main target of the "Gemstone" plan--the Democratic National Committee Headquarters in the Watergate Office Building. They planned the breakin for the Memorial Day weekend. Hunt alerted his Cuban-American contact in Miami, Bernard Barker, to be prepared to bring a trained burglary team to Washington. Barker, who had performed this same type of mission for Hunt in the Ellsberg breakin, had served under Hunt in the Bay of Pigs operation. He was a refugee from his native Cuba and considered himself a patriot committeed to the mission of freeing Cuba from Castro.

The Cuban-Americans he recruited for Hunt from time to time were cut from the same cloth. The motivations of Barker and his crew were clearly stated by Barker when he testified: "... E. Howard Hunt, under the name of Eduardo, represents to the Cuban people their liberation. I cannot deny myservices in the way that it was proposed to me on a matter of national security, knowing that with my training, I had personnel available for this type of operation. I could not deny this request at the time." (1 Hearings 365).

On May 17, Martinez purchased six one-way tickets to 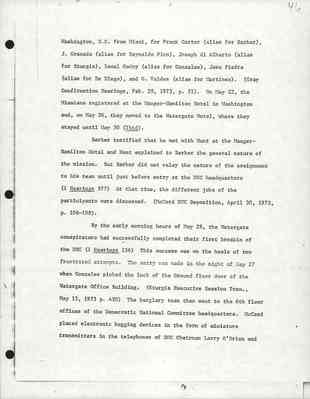 46 Washington, D.C. from Miami, for Frank Carter (alias for Barker), J. Granada (alias for Reynaldo Pico), Joseph di Alberto (alias for Sturgis), Raoul Godoy (alias for Gonzales), Jose Piedra (alias for De Diego), and G. Valdes (alias for Martinez). (Gray Confirmation Hearings, Feb. 28, 1973, p. 51). On May 22, the Miamians registered at the Manger-Hamilton Hotel in Washington and, on May 26, they moved to the Watergate Hotel where they stayed until May 30 (Ibid).

Barker testified that he met with Hunt at the MangerHamilton Hotel and Hunt explained to Barker the general nature of the mission. But Barker did not relay the nature of the assignment to his team until just before entry at the DNC headquarters (1 Hearings 377) At that time, the different jobs of the participants were discussed. (McCord DNC Deposition, April 30, 1973, p. 106-108).

By the early morning hours of May 28, the Watergate conspirators had successfully completed their first breakin of the DNC (1 Hearings 156) This success was on the heels of two frustrated attempts. The entry was made in the night of May 27 when Gonzales picked the lock of the Ground floor door of the Watergate Office Building. (Stugis Executive Session Tran., May 15, 1973 p. 430) The burglary team then went to the 6th floor offices of the Democratic National Committee headquarters. McCord placed electronic bugging devices in the form of miniature transmitters in the telephones of DNC Chairman Larry O'Brien and 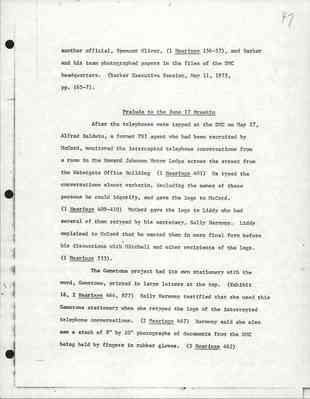 Prelude to the June 17 Breakin

After the telephones were tapped at the DNC on May 27, Alfred Baldwin, a former FBI agent who had been recruited by McCord, monitored the intercepted telephone conversations from a room in the Howard Johnson Motor Lodge across the street from the Watergate Office Building (1 Hearings 401) He typed the conversations almost verbatim, including the names of those persons he could identify, and gave the logs to McCord. (1 Hearings 409-410) McCord gave the logs to Liddy who had several of them retyped by his secretary, Sally Harmony. Liddy explained to McCord that he wanted them in more final form before his discussions with Mitchell and other recipients of the logs. (1 Hearings 233).

The Gemstone project had its own stationery with the word, Gemstone, printed in large letters at the top. (Exhibit 16, 2 Hearings 464, 877) Sally Harmony testified that she used this Gemstone stationery when she retyped the logs of the intercepted telephone coversations. (2 Hearings 467) Harmony said she also saw a stack of 8" by 10" photographs of documents from the DNC being held by fingers in rubber gloves. (2 Hearings 462) 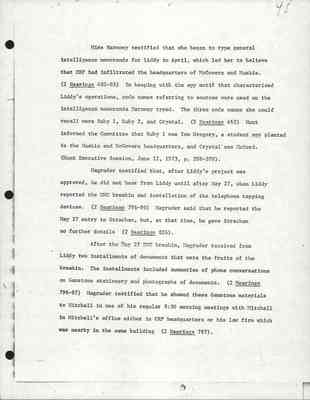 Miss Harmony testified that she began to type general intelligence memoranda for Liddy in April, which led her to believe that CRP had infiltrated the headquarters of McGovern and Muskie. (2 Hearings 482-83) In keeping with the spy motif that characterized Liddy's operations, code names referring to sources were used on the intelligence memoranda Harmony typed. The three code names she could recall were Ruby 1, Ruby 2, and Crystal. (2 Hearings 462) Hunt informed the Committee that Ruby 1 was Tom Gregory, a student spy planted in the Muskie and McGovern headquarters, and Crystal was McCord. (Hunt Executive Session, June 12, 1973, p. 208-209).

Magruder testified that, after Liddy's project was approved, he did not hear from Liddy until after May 27, when Liddy reported the DNC breakin and installation of the telephone tapping devices. (2 Hearings 796-99) Magruder said that he reported the May 27 entry to Strachan, but, at that time, he gave Strachan no further details (2 Hearings 826).

After the May 27 DNC breakin, Magruder received from Liddy two installments of documents that were the fruits of the breakin. The installments included summaries of phone conversations on Gemstone stationery and photographs of documents. (2 Hearings 796-97) Magruder testified that he showed these Gemstone materials to Mitchell in one of his regular 8:30 morning meetings with Mitchell in Mitchell's office either in CRP headquarters or his law firm which was nearby in the same building (2 Hearings 797).