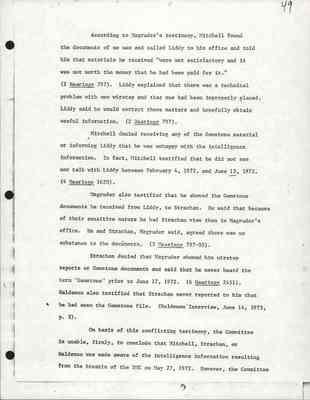 According to Magruder's testimony, Mitchell found the documents of no use and called Liddy to his office and told him that materials he received "were not satisfactory and it was not worth the money that he had been paid for it." (2 Hearings 797). Liddy explained that there was a technical problem with one wiretap and that one had been improperly placed. Liddy said he would correct these matters and hopefully obtain useful information. (2 Hearings 797).

Mitchell denied receiving any of the Gemstone material or informing Liddy that he was unhappy with the intelligence information. In fact, Mitchell testified that he did not see nor talk with Liddy between February 4, 1972, and June 15, 1972. (4 Hearings 1620).

Magruder also testified that he showed the Gemstone documents he received from Liddy, to Strachan. He said that because of their sensitive nature he had Strachan view them in Magruder's office. He and Strachan, Magruder said, agreed there was no substance to the documents. (2 Hearings 797-98).

Strachan denied that Magruder showed him the wiretap reports or Gemstone documents and said he never heard the term "Gemstone" prior to June 17, 1972. (6 Hearings 2451). Haldeman also testified that Strachan never reported to him that he had seen the Gemstone file. (Haldeman Interview, June 14, 1973, p. 3).

On basis of this conflicting testimony, the Committee is unable, firmly, to conclude that Mitchell, Strachan, or Haldeman was made aware of the intelligence information resulting from the breakin of the DNC on May 27, 1972. However, the Committee 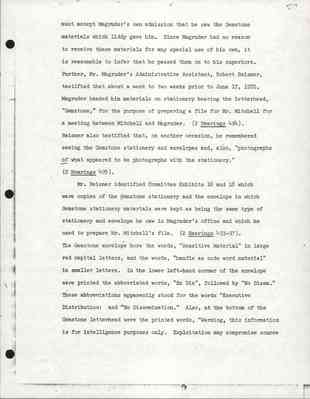 50 must accept Magruder's own admission that he saw the Gemstone materials which Liddy gave him. Since Magruder had no reason to receive these materials for any special use of his own, it is reasonable to infer that he passed them on to his superiors. Further, Mr. Magruder's Administrative Assistant, Robert Reisner, testified that about a week or two weeks prior to June 17, 1972, Magruder handed him materials on stationery bearing the letterhead, "Gemstone," for the purpose of preparing a file for Mr. Mitchell for a meeting between Mitchell and Magruder. (2 Hearings 494). Reisner also testified that, on another occasion, he remembered seeing the Gemstone stationery and envelopes and, also "photographs of what appeared to be photographs with the stationery." (2 Hearings 495).

Mr. Reisner identified Committee Exhibits 16 and 18 which were copies of the Gemstone stationery and the envelope in which Gemstone stationery materials were kept as being the same type of stationery and envelope he saw in Magruder's office and which he used to prepare Mr. Mitchell's file. (2 Hearings 493-97). The Gemstone envelope bore the words, "Sensitive Material" in large red captial letters, and the words, "handle as code word material" in smaller letters. In the lower left-hand corner of the envelope were printed the abbreviated words, "Ex Dis", followed by "No Disem." These abbreviations apparently stood for the words "Executive Distribution: and "No Dissemination." Also, at the bottom of the Gemstone letterhead were the printed words, "Warning, this information is for intelligence purposes only. Exploitation may compromise source

A second break-in of the Democratic National Committee headquarters at the Watergate was made to correct the trouble experienced with the wiretap device on Mr. O'Brien's telephone. Dean testified that on June 19, 1972, two days after the Juney 17 break-in, he met with Liddy who told him that the man arrested in the DNC were his men. (3 Hearings 933) When Dean asked Liddy why he had been in the DNC, he told Dean that "Magruder had pushed him into it. He told me that he had not wanted to do it, but Magruder had complained about the fact that they were not getting food information from a bug that had been placed in the DNC earlier. He then explained something about the steel structure of the Watergate Office Building that was inhibiting transmission of the bug and that the had gone into the building to correct this problem." (3 Hearings 933). Dean later gave this same account to President Nixon on March 21, 1973 (Edited Presidential Conversations, p. 180-181). Ehrlichman, during a meeting with Nixon and Haldeman on April 14, 1973, said that Magruder told him that the second DNC break-in was "Liddy's own notion" and that "neither Mitchell nor Magruder knew that another break-in was contemplated," but that Liddy met with Mitchell and said "Mr. Mitchell, I'll take care of it." (Edited Presidential Conversations, p. 587). McCord 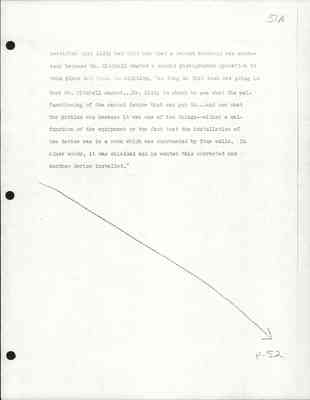 testified that Liddy told him that a second break-in was necessary because Mr. Mitchell wanted a second photographic operation to take place and that, in addition, "as long as that team was going in that Mr. Mitchell wanted...Mr. Liddy to check to see what the malfunctioning of the second device that was put in...and see what the problem was because it was one of two things--either a malfunction of the equipment of the fact that the installation of the device was in a room which was surrounded by four walls. In other words, it was shielded and he wanted this corrected and another device installed." \ ->p. 52 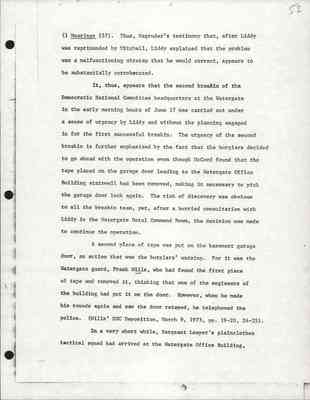 52 (1 Hearings 157). Thus, Magruder's testimony that, after Liddy was reprimanded by Mitchell, Liddy explained that the problem was a malfunctioning wiretap that he would correct, appears to be substantially corroborated.

It, thus, appears that the second breakin of the Democratic National Committee headquarters at the Watergate in the early morning hours of June 17 was carried out under a sense of urgency by Liddy and without the planning engaged in the first successful breakin. The urgency of the second breakin is further emphasized by the fact that the burglars decided to go ahead with the operation even though McCord found that the tape placed on the garage door leading to the Watergate Office Building stairwell had been removed, making it necessary to pick the garage door lock again. The risk of discovery was obvious to all the breakin team, yet, after a hurried consultation with Liddy in the Watergate Hotel Command Room, the decision was made to continue the operation.

A second piece of tape was put on the basement garage door, an action that was the burglars' undoing. For it was the Watergate guard, Frank Wills, who had found the first piece of tape and removed it, thinking that one of the engineers of the building had put it on the door. However, when he made his rounds again and saw the door retaped, he telephoned the police. (Wills' DNC Deposition, March 9, 1973, pp. 19-20, 24-25).

In a very short while, Sergeant Leeper's plainclothes tactical squad had arrived at the Watergate Office Building,