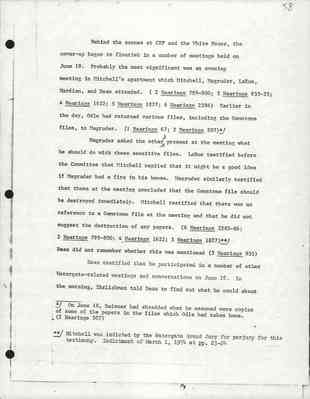 Behind the scenes at CRP and the White House, the cover-up began to flourish in a number of meetings held on June 19. Probably the most significant was an evening meeting in Mitchell's apartment which Mitchell, Magruder, LaRue, Mardian, and Dean attended. (2 Hearings 799-800; 3 Hearings 933-935; 4 Hearings 1622; 5 Hearings 1877; 6 Hearings 2286) Earlier in the day, Odle had returned various files, including the Gemstone files, to Magruder. (1 Hearings 67; 2 Hearings 507)*/

Magruder asked the others present at the meeting what he should do with these sensitive files. LaRue testified before the Committee that Mitchell replied that it might be a good idea if Magruder had a fire in his house. Magruder similarly testified that those at the meeting concluded that the Gemstone file should be destroyed immediately. Mitchell testified that there was no reference to a Gemstone file at the meeting and that he did not suggest the destruction of any papers. (6 Hearings 2285-86; 2 Hearings 799-800; 4 Hearings 1622; 5 Hearings 1877)**/ Dean did not remember whether this was mentioned (3 Hearings 935)

Dean testified that he participated in a number of other Watergate-related meetings and conversations on June 19. In the morning, Ehrlichman told Dean to find out what he could about

**/ Mitchell was indicted by the Watergate Grand Jury for perjury for this testimony. Indictment of March 1, 1974 at pp. 23-24 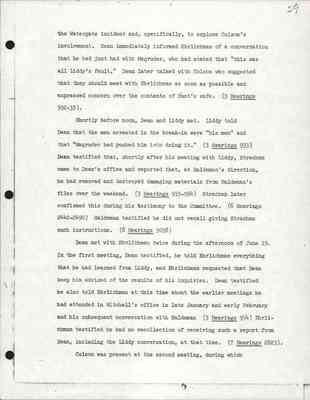 59 the Watergate incident and, specifically, to explore Colson's involvement. Dean immediately informed Ehrlichman of a conversation that he had just had with Magruder, who had stated that "this was all Liddy's fault." Dean later talked with Colson who suggested that they should meet with Ehrlichman as soon as possible and expressed concern over the contents of Hunt's safe. (3 Hearings 932-35).

Shortly before noon, Dean and Liddy met. Liddy told Dean that the men arrested in the break-in were "his men" and that "Magruder had pushed him into doing it." (3 Hearings 933) Dean testified that, shortly after his meeting with Liddy, Strachan came to Dean's office and reported that, at Haldeman's direction, he had removed and destroyed damaging materials from Haldeman's files over the weekend. (3 Hearings 933-934) Strachan later confirmed this during his testimony to the Committee. (6 Hearings 2442-2490) Haldeman testified that he did not recall giving Strachan such instructions. (8 Hearings 3038)

Dean met with Ehrlichman twice during the afternoon of June 19. In the first meeting, Dean testified, he told Ehrlichman everything that he had learned from Liddy, and Ehrlichman requested that Dean keep him advised of the results of his inquiries. Dean testified he also told Ehrlichman at this time about the earlier meetings he had attended in Mitchell's office in late January and early February and his subsequent conversation with Haldeman (3 Hearings 934) Ehrlichman testified that he had no recollection of receiving such a report from Dean, including the Liddy conversation, at that time. (7 Hearings 2823).

Colson was present at the second meeting, during which 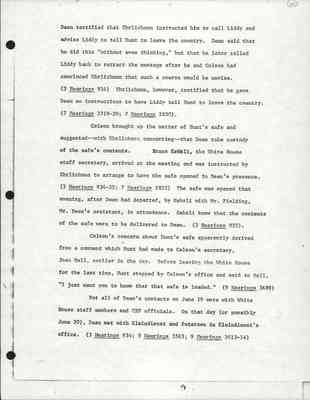 60 Dean testified that Ehrlichman instructed him to call Liddy and advise Liddy to tell Hunt to leave the country. Dean said that he did this "without even thinking," but that he later called Liddy back to retract the message after he and Colson had convinced Ehrlichman that such a course would be unwise. (3 Hearings 934) Ehrlichman, however, testified that he gave Dean no instructions to have Liddy tell Hunt to leave the country. (7 Hearings 2718-20; 7 Hearings 2830)

Colson brought up the matter of Hunt's safe and suggested that--with Ehrlichman concurring--that Dean take custody of the safe's contents. Bruce Kehrli, the White House staff secretary, arrived at the meeting and was instructed by Ehrlichman to arrange the to have the safe opened in Dean's presence. (3 Hearings 934-35; 7 Hearings 2822) The safe was opened that evening, after Dean had departed, by Kehrli with Mr. Fielding, Mr. Dean's assistant, in attendance. Kerhli knew that the contents of the safe were to be delivered to Dean. (3 Hearings 935).

Colson's concern about Hunt's safe apparently derived from a comment which Hunt had made to Colson's secretary, Joan Hall, earlier in the day. Before leaving the White House for the last time, Hunt stopped by Colson's ofice and said to Hall, "I just want you to know that that safe is loaded." (9 Hearings 3689)

Not all of Dean's contacts on June 19 were with White House staff members and CRP officials. On that day (or possibly June 20), Dean met with Kleindienst and Petersen in Kleindienst's office. (3 Hearings 934; 9 Hearings 3563; 9 Hearings 3613-14) 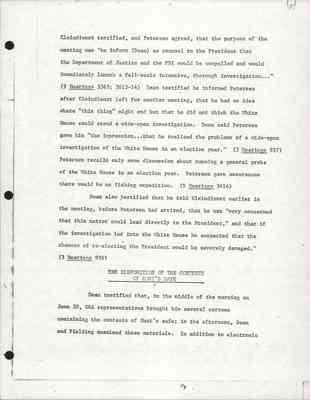 61 Kleindienst testified, and Petersen agreed, that the purpose of the meeting was "to inform (Dean) as counsel to the President that the Department of Justice and the FBI would be compelled and would immediately launch a full-scale intensive, thorough investigation..." (9 Hearings 3563; 3613-14) Dean testified he informed Petersen after Kleindienst left for another meeting, that he had no idea where "this thing" might end but that he did not think the White House could stand a wide-open investigation. Dean said Petersen gave him "the impression...that he realized the problems of a wide-open investigation of the White House in an election year." (3 Hearings 937) Petersen recalls only some discussion about running a general probe of the White House in an election year. Petersen gave assurances there would be no fishing expedition. (9 Hearings 3614)

Dean also testified that he told Kleindienst earlier in the meeting, before Petersen had arrived, that he was "very concerned that this matter could lead directly to the President," and that if the investigation led into the White House he suspected that the chances of re-electing the President would be severely damaged." (3 Hearings 936)

THE DISPOSITION OF THE CONTENTS OF HUNT'S SAFE

Dean testified that, in the middle of the morning on June 20, CSA representatives brought him several cartons containing the contents of Hunt's safe; in the afternoon, Dean and Fielding examined these materials. In addition to electronic 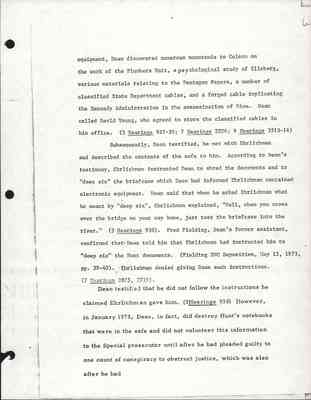 62 equipment, Dean discovered numerous memoranda to Colson on the work of the Plumbers Unit, a psychological study of Ellsberg, various materials relating to the Pentagon Papers, a number of classified State Department cables, and a forged cable implicating the Kennedy Administration in the assassination of Diem. Dean called David Young, who agreed to store the classified cables in his office. (3 Hearings 937-38; 7 Hearings 2826; 9 Hearings 3513-14)

Subsequently, Dean testified, he met with Ehrlichman and described the contents of the safe to him. According to Dean's testimony, Ehrlichman instructed Dean to shed the documents and to "deep six" the briefcase which Dean had informed Ehrlichman contained electronic equipment. Dean said that when he asked Ehrlichman what he meant by "deep six", Ehrlichman explained, "Well, when you cross over the bridge on your way home, just toss the briefcase into the river." (3 Hearings 938). Fred Fielding, Dean's former assistant, confirmed that Dean told him that Ehrlichman had instructed him to "deep six" the Hunt documents. (Fielding DNC Deposition, May 15, 1973, pp. 39-40). Ehrlichman denied giving Dean such instructions. (7 Hearings 2825, 2719).

Dean testified that he did not follow the instructions he claimed Ehrlichman gave him (3Hearings 938) However, in January 1973, Dean, in fact, did destroy Hunt's notebooks that were in the safe and did not volunteer this information to the Special prosecutor until after he had pleaded guilty to one count of conspiracy to obstruct justice, which was also after he had