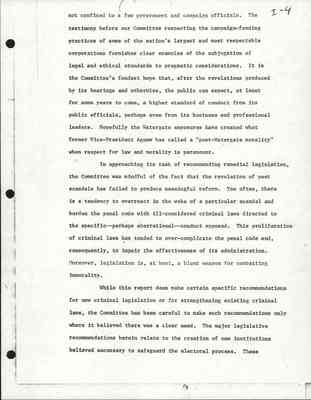 not confined to a few government and campaign officials. The testimony before our Committee respecting the campaign-funding practices some of the nations largest and most respectable corporations furnishes clear examples of the subjugation of legal and ethical standards to pragmatic considerations. It is the Committee's fondest hope that, after the revelations produced by its hearings and otherwise, the public can expect, at least for some years to come, a higher standard of conduct from its public officials, perhaps even from its business and professional leaders. Hopefully the Watergate exposures have created what former Vice-President Agnew has called a "post-Watergate morality" when respect for law and morality is paramount

In approaching its task of recommending remedial legislation, the Committee was mindful of the fact that the revelation of the past scandals has failed to produce meaningful reform. Too often, there is a tendency to overreact in the wake of a particular scandal and burden the penal code with ill-considered criminal laws directed to the specific--perhaps aberrational--conduct exposed. This proliferation of criminal laws has tended to over-complicate the penal code and, consequently, to impar the effectiveness of its administration. Moreover, legislation is, at best, a blunt weapon for combatting immorality.

While this report does make certain specific recommendations for new criminal legislation or for strengthening existing criminal laws, the Committee has been careful to make such recommendations only where it believed there was a clear need. The major legislative recommendations herein relate to the creation of new institutions believed necessary to safeguard the electoral process. These 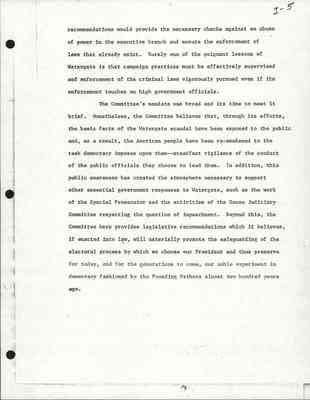 recommendations would provide the necessary checks against an abuse of power in the executive branch and ensure the enforcement laws that already exist. Surely one of the poignant lessons of Watergate is that campaign practices must be effectively supervised and enforcement of the criminal laws vigorously pursued even if its enforcement touches on high government officials.

The Committee's mandate was broad and its time to meet it brief. Nonetheless, the Committee believes that, through its efforts, the basic facts the Watergate scandal have been exposed to the public and, as a result, the American people have been re-awakened to the task democracy imposes upon them--steadfast vigilance of the conduct of the public officials they choose to lead them. In addition, this public awareness has created the atmosphere necessary to support other essential government responses to Watergate, such as the work of the Special Prosecutor and the activities of the House Judiciary Committee respecting the question of impeachment. Beyond this, the Committee here provides legislative recommendations which it believes, if enacted into law, will materially promote the safeguarding of the electoral process by which we choose our President and thus preserve for today, and for the generations to come, our noble experiment in democracy fashioned by the Founding Fathers almost two hundred years ago. 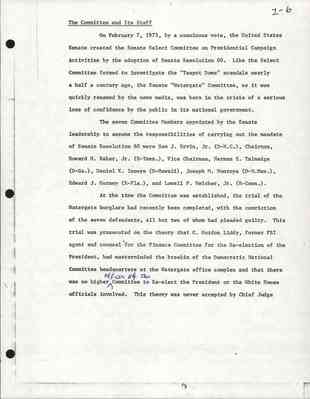 I-6 The Committee and Its Staff

On February 7, 1973, by a unanimous vote, the United States Senate created the Senate Select Committee on Presidential Campaign Activities by the adoption of Senate Resolution 60. Like the Select Committee formed to investigate the "Teapot Dome" scandels nearly a half a century ago, the Senate "Watergate" Committee, as it was quickly renamed by the news media, was born in the crisis of a serious loss of confidence by the public in its national government.

At the time the Committee was established, the trial of the Watergate burglars had recently completed, with the conviction of the seven defendants, all but two of whom had pleaded guilty. This trial was prosecuted on the theory that G. Gordon Liddy, former FBI agent and counsel for the Finance Committee for the Re-election of the President, had masterminded the breakin of the Democratic National Committee headquarters at the Watergate office complex and that there was no higher office of the Committee to Re-elect the President or the White House officials involved. This theory was never accepted by Chief Judge 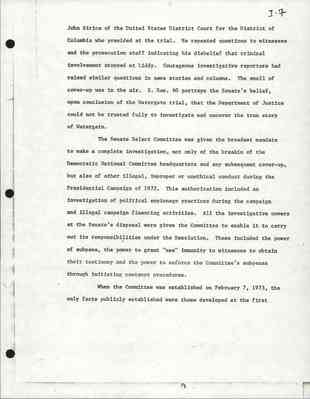 I-7 John Sirica of the United States District Court for the District of Columbia who presided at the trial. He repeated questions to witnesses and the prosecution staff indicating his debelief that criminal involvement stopped at Liddy. Courageous investigative reporters had raised similar questions in news stories and columns. The smell of cover-up was in the air. S. Res. 90 portrays the Senate's belief, upon conclusion of the Watergate trial, that the Department of Justice could not be trusted fully to investigate and uncover the true story of Watergate.

The Senate Select Committee was given the broadest mandate to make a complete investigation, not only of the breakin of the Democratic National Committee headquarters and any subsequent cover-up, but also of other illegal, improper or unethical conduct during the Presidential Campaign of 1972. This authorization included an investigation of political espionage practices during the campaign and illegal campaign financing activities. All the investigative powers at the Senate's disposal were given the Committee to enable it to carry out its responsibilities under the Resolution. These included the power of subpena, the power to grant "use" immunity to witnesses to obtain their testimony and the power to enforce the Committee's subpenas through initiating contempt procedures.

When the Committee was established on February 7, 1973, the only facts publicly established were those developed at the first 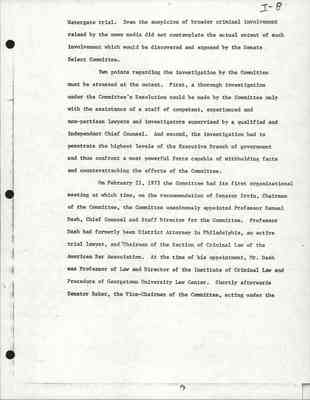 I-8 Watergate trial. Even the suspicion of broader criminal involvement raised by the news media did not contemplate the actual extent of such involvement which would be discovered and exposed by the Senate Select Committee.