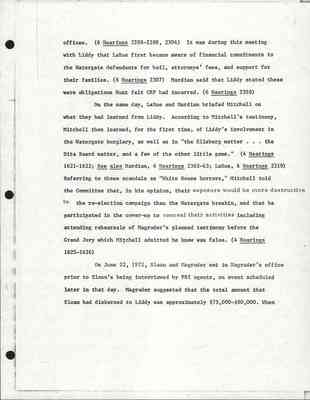 73 offices. (6 Hearings 2288-2289, 2304) It was during this meeting with Liddy that LaRue first became aware of financial commitments to the Watergate defendants for bail, attorneys' fees, and support for their families. (6 Hearings 2307) Mardian said that Liddy stated these were obligations Hunt felt CRP had incurred. (6 Hearings 2358)

On the same day, LaRue and Mardian briefed Mitchell on what they had learned from Liddy. According to Mitchell's testimony, Mitchell then learned, for the first time, of Liddy's involvement in the Watergate burglary, as well as in "the Ellsberg matter...the Dita Beard matter, and a few of the other little gems." (4 Hearings 1621-1622; See also Mardian, 6 Hearings 2362-63; LaRue, 6 Hearings 2318) Referring to these scandals as "White House horrors," Mitchell told the Committee that, in his opinion, their exposure would be more destructive to the re-election campaign than the Watergate breakin, and that he participated in teh cover-up to conceal their activities including attending rehearsals of Magruder's planned testimony before the Grand Jury which Mitchell admitted he knew was false. (4 Hearings 1625-1626)

On June 22, 1972, Sloan and Magruder met in Magruder's office prior to Sloan's being interviewed by FBI agents, an event scheduled later in that day. Magruder suggested that the total amount that Sloan had disbursed to Liddy was approximately $75,000-$80,000. When 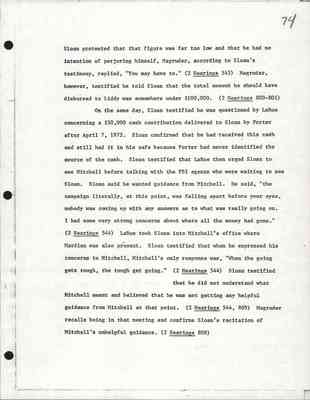 74 Sloan protested that that figure was far too low and that he had no intention of perjuring himself, Magruder, according to Sloan's testimony, replied, "You may have to." (2 Hearings 543) Magruder, however, testified he told Sloan that the total amount he should have disbursed to Liddy was somewhere under $100,000. (2 Hearings 800-801)

On the same day, Sloan testified he was questioned by LaRue concerning a $50,000 cash contribution delivered to Sloan by Porter after April 7, 1972. Sloan confirmed that he had received this cash and still had it in his safe because Porter had never identified the source of the cash. Sloan testified that LaRue then urged Sloan to see Mitchell before talking with the FBI agents who were waiting to see Sloan. Sloan said he wanted guidance from Mitchell. He said, "the campaign literally, at this point, was falling apart before your eyes, nobody was ocming up with any answers as to what was really going on. I had some very strong concerns about where all the money had had." ( 2 Hearings 544) LaRue took Sloan into Mitchell's office where Mardian was also present. Sloan testified that when he expressed his concerns to Mitchell, Mitchell's only response was, "When the going gets tough, the tough get going." (2 Hearings 544) Sloan testified that he did not understand what Mitchell meant and believed that he was not getting any helpful guidance from Mitchell at that point. (2 Hearings 544, 809) Magruder recalls that being in that meeting and confirms Sloan's recitation of Mitchell's unhelpful guidance. (2 Hearings 809) 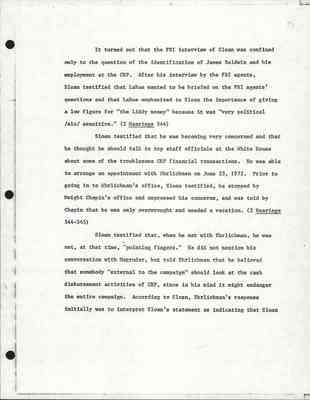 It turned out that the FBI interview of Sloan was confined only to the question of the identification of James Baldwin and his employment at the CRP. After his interview by the FBI agents, Sloan testified that LaRue wanted to be briefed on the FBI agents' questions and that LaRue emphasized to Sloan the importance of giving a low figure for the "the Liddy money" because it was "very political /sic/ sensitive." (2 Hearings 544)

Sloan testified that he was becoming very concerned and that he thought he should talk to top staff officials at the White House about some of the troublesome CRP financial transactions. He was able to arrange an appointment with Ehrlichman on June 23, 1972. Prior to going in to Ehrlichman's office, Sloan testified, he stopped by Dwight Chapin's office and expressed his concerns, and was told by Chapin that he was only overwrought and needed a vacation. (2 Hearings 544-545)

Sloan testified that, when he met with Ehrlichman, he was not, at that time, "pointing fingers." He did not mention his conversation with Magruder, but told Ehrlichman that he believed that somebody "external to the campaign" should look at the cash disbursement activities of CRP, since in his mind it might endanger the entire campaign. According to Sloan, Ehrlichman's response initially was to interpret Sloan's statement as indicating that Sloan 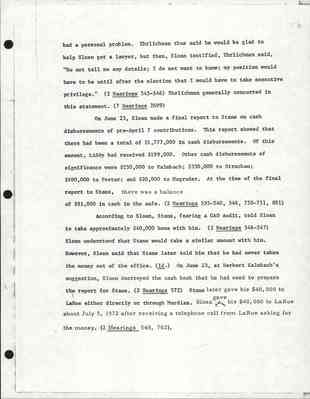 76 had a personal problem. Ehrlichman thus said he would be glad to help Sloan get a lawyer, but then, Sloan testified, Ehrlichman said, "Do not tell me any details; I do not want to know; my position would have to be until after the election that I would have to take executive privilege." (2 Hearings 545-546) Ehrlichman generally concurred in this statement. (7 Hearings 2699)

According to Sloan, Stans, fearing a GAO audit, told Sloan to take approximately $40,000 home with him. (2 Hearings 546-547) Sloan understood that Stans would take a similar amount with him. However, Sloan said that Stans later told him that he had never taken the money out of the office. (Id.) On June 23, at Herbert Kalmbach's suggestion, Sloan destroyed the cash book he had used to prepare the report for Stans. (2 Hearings 572) Stans later gave his $40,000 to LaRue about July 5, 1972 after receiving a telephone call from LaRue asking for the money. (2 Hearings 548, 702). 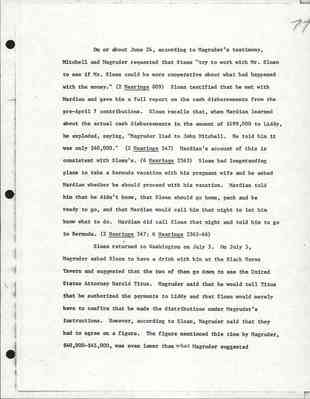 On or about June 24, according to Magruder's testimony, Mitchell and Magruder requested that Stans "try to work with Mr. Sloan to see if Mr. Sloan could be more cooperative about what had happened with the money." ( 2 Hearings 809) Sloan testified that he met with Mardian and gave him a full report on the cash disbursements from the pre-April 7 contributions. Sloan recalls that, when Mardian learned about the actual cash disbursements in the amount of $199,000 to Liddy, he exploded, saying, "Magruder lied to John Mitchell. He told him it was only $40,000." (2 Hearings 547) Mardian's account of this is consistent with Sloan's. (6 Hearings 2363) Sloan had longstanding plans to take a Bermuda vacation with his pregnant wife and he asked Mardian whether he should proceed with his vacation. Mardian told him that he didn't know, that Sloan should go home, pack and be ready to go, and that Mardian would call him that night to let him know what to do. Mardian did call Sloan that night and told him to go to Bermuda. (2 Hearings 547; 6 Hearings 2365-66)

Sloan returned to Washington on July 3. On July 5 Magruder asked Sloan to have a drink with him at the Black Horse Tavern and suggested that the two of them go down to see the United States Attorney Harold Titus. Magruder said that he would tell Titus that he authorized the payments to Liddy and that Sloan would merely have to confirm that he made the distributions under Magruder's instructions. However, according to Sloan, Magruder said that they had to agree on a figure. The figure mentioned this time by Magruder, $40,000-$45,000, was even lower than what Magruder suggested