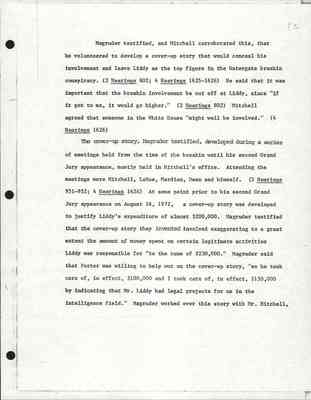 Magruder testified, and Mitchell corroborated this, that he volunteered to develop a cover-up story that would conceal his involvement and leave Liddy as the top figure in the Watergate breakin conspiracy. (2 Hearings 802; 4 Hearings 1625-1626) He said that it was important that the breakin involvement be cut off at Liddy, since "if it got to me, it would go higher." (2 Hearings 802) Mitchell agreed that someone in the White House "might well be involved." (4 Hearings 1626)

The cover-up story, Magruder testified, deveoped during a series of meetings held from the time of the breakin until his second Grand Jury appearance, mostly held in Mitchell's office. Attending the meetings were Mitchell, LaRue, Mardian, Dean and himself. (3 Hearings 951-952; 4 Hearings 1624) At some point prior to his second Grand Jury appearance on August 16, 1972, a cover-up story was developed to justify Liddy's expenditure of almost $200,000. Magruder testified that the cover-up story they invented involved exaggerating to a great extent the amount of money spent on certain legitimate activities Liddy was responsible for "to the tune of $230,000." Magruder said that Porter was willing to help out on the cover-up story, "so he took care of, in effect, $100,000 and I took care of, in effect, $150,000 by indicating that Mr. Liddy had legal projects for us in the intelligence field." Magruder worked over this story with Mr. Mitchell, 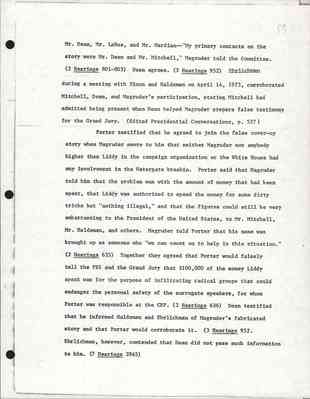 Porter testified that he agreed to join the false cover-up story when Magruder swore to him that neither Magruder nor anybody higher than Liddy in the campaign organization or the White House had any involvement in the Watergate breakin. Porter said that Magruder told him that the problem was with the amount of money that had been spent, that Liddy was authorized to spend the money for some dirty tricks but "nothing illegal," and that the figures could still be very embarrassing to the President of the United States, to Mr. Mitchell, Mr. Haldeman, and others. Magruder told Porter that his name was brought up as someone "we can count on to help in this situation." (2 Hearings 635) Together they agreed that Porter would falsely tell the FBI and the Grand Jury that $100,000 of the money Liddy spent was for the purpose of infiltrating radical groups that could endanger the personal safety of the surrogate speakers, for whom Porter was responsible at the CRP. (2 Hearings 636) Dean testified that he informed Haldeman and Ehrlichman of Magruder's fabricated story and that Porter would corroborate it. (3 Hearings 952. Ehrlichman, however, contended that Dean did not pass such information to him. (7 Hearings 2845)