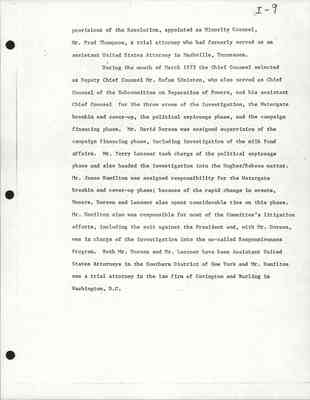 I-9 provisions of the Resolution, appointed as Minority Counsel, Mr. Fred Thompson, a trial attorney who had formerly served as an assistant United States Attorney in Nashville, Tennessee.

During the month of March 1973 the Chief Counsel selected as Deputy Chief Counsel Mr. Rufus Edmisten, who also served as Chief Counsel of the Subcommittee on Separation of Powers, and his assistant Chief Counsel for the three areas of the investigation, the Watergate breakin and cover-up, the political espionage phase, and the campaign financing phase. Mr. David Dorsen was assigned the supervision of the campaign financing phase, including investigation of the milk fund affairs. Mr. Terry Lenzner took charge of the political espionage phase and also headed the investigation into the Hughes/Rebozo matter. Mr. James Hamilton was assigned responsibility for the Watergate breakin and cover-up phase; because of the rapid change in events, Messrs. Dorsen and Lenzner also spent considerable time on this phase. Mr. Hamilton also was responsible for most of the Committee's litigation efforts, including the suit against the President and, with Mr. Dorsen, was in charge of the investigation into the so-called Responsiveness Program. Both Mr. Dorsen and Mr. Lenzner have been Assistant United States Attorneys in the Southern District of New York and Mr. Hamilton was a trial attorney in the law firm of Covington and Burling in Washington, D.C. 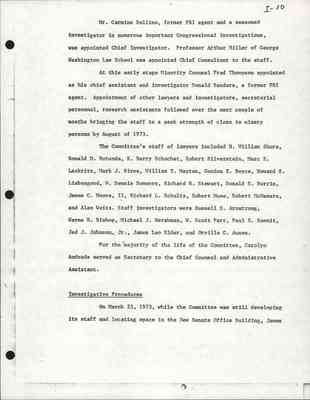 At this early stage Minority Counsel Fred Thompson appointed as his chief assistant and investigator Donald Sanders, a former FBI agent. Appointment of other lawyers and investigators, secretarial personnel, research assistants followed over the next couple of months bringing the staff to a peak strength of close to ninety persons by August of 1973.

For the majority of the life of the Committee, Carolyn Andrade served as Secretary to the Chief Counsel and Administrative Assistant.

On March 23, 1973, while the Committee was still developing its staff and locating space in the New Senate Office Building, James 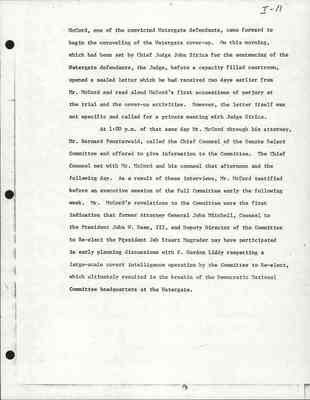 I-11 McCord, one of the convicted Watergate defendants, came forward to begin the unraveling of the Watergate cover-up. On this morning, which had been set by Chief Judge John Sirica for the sentencing of the Watergate defendants, the Judge, before a capacity filled courtroom, opened a sealed letter which he had received two days earlier from Mr. McCord and read aloud McCord's first accusations of perjury at the trial and the cover-up activities. However, the letter itself was not specific and called for a private meeting with Judge Sirica.

At 1:00 p.m. of that same day Mr. McCord through his attorney, Mr. Bernard Fensterwald, called the Chief Counsel of the Senate Select Committee and offered to give information to the Committee. The Chief Counsel met with Mr. McCord and his counsel that afternoon and the following day. As a result of these interviews, Mr. McCord testified before an executive session of the full Committee early the following week. Mr. McCord's revelations to the Committee were the first indication that former Attorney General John Mitchell, Counsel to the President John W. Dean, III, and Deputy Director of the Committee to Re-elect the President Jeb Stuart Magruder may have participated in early planning discussions with G. Gordon Liddy respecting a large-scale covert intelligence operation by the Committee to Re-elect, which ultimately resulted in the breakin of the Democratic National Committee headquarters at the Watergate. 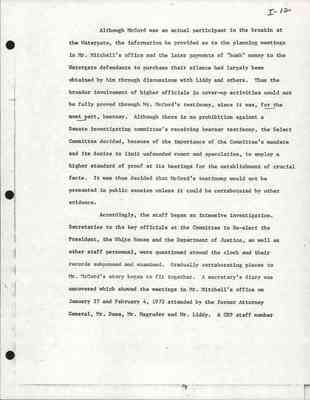 Although McCord was an actual participant in the breakin at the Watergate, the information he provided as to the planning meetings in Mr. Mitchell's office and the later payment's of "hush" money to the Watergate defendants to purchase their silence had largely been obtained by him through discussions with Liddy and others. Thus the broader involvement of higher officials in cover-up activities could not be fully proved through Mr. McCord's testimony, since it was, for the most part, hearsay. Although there is no prohibition against a Senate investigating committee's receiving hearsay testimony, the Select Committee decided, because of the importance of the Committee's mandate and its desire to limit unfounded rumor and speculation, to employ a higher standard of proof at its hearings for the establishment of crucial facts. It was thus decided that McCord's testimony would not be presented in public session unless it could be corraborated by other evidence.

Accordingly, the staff began an intensive investigation. Secretaries to the key officials at the Committee to Re-elect the President, the White House and the Department of Justice, as well as other staff personnel, were questioned around the clock and their records subpenaed and examined. Gradually corraborating pieces to Mr. McCord's story began to fit together. A secretary's diary was uncovered which showed the meetings in Mr. Michell's office on January 27 and February 4, 1972 attended by the former Attorney General, Mr. Dean, Mr. Magruder and Mr. Liddy. A CRP staff member 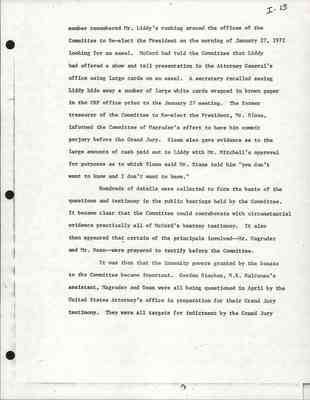 member remembered Mr. Liddy's rushing around the offices of the Committee to Re-elect the President on the morning of January 27, 1972 looking for an easel. McCord had told the Committee that Liddy had offered a show and tell presentation in the Attorney General's office using large cards on an easel. A secretary recalled seeing Liddy hide away a number of large white cards wrapped in brown paper in the CRP office prior to the January 27 meeting. The former treasurer of the Committee to Re-elect the President, Mr. Sloan, informed the Committee of Magruder's effort to have him commit perjury before the Grand Jury. Sloan also gave evidence as to the large amounts of cash paid out to Liddy with Mr. Mitchell's approval for purposes as to which Sloan said Mr. Stans told him "you don't want to know and I don't want to know."

Hundreds of details were collected to form the basis of the questions and testimony in the public hearings held by the Committee. It became clear that the Committee could cooraborate with circumstantial evidence practically all of McCord's hearsay testimony. It also then appeared that certain of the principals involved--Mr. Magruder and Mr. Dean--were prepared to testify before the Committee.

It was then that the immunity powers granted by the Senate to the Committee became important. Gordon Stachan, H.R. Haldeman's assistant, Magruder and Dean were all being questioned in April by the United States Attorney's office in preparation for their Grand Jury testimony. They were all targets for indictment by the Grand Jury