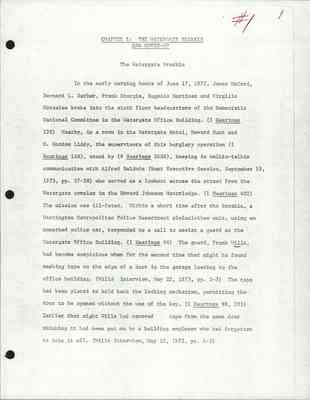 #1 1 CHAPTER I: THE WATERGATE BREAKIN AND COVER-UP

In the early morning hours of June 17, 1972, James McCord, Bernard L. Barker, Frank Sturgis, Eugenio Martinez and Virgilio Gonzales broke into the sixth floor headquarters of the Democratic National Committee in the Watergate Office Building. (1 Hearings 128) Nearby, in a room in the Watergate Hotel, Howard Hunt and G. Gordon Liddy, the supervisors of this burglary operation (1 Hearings 158), stood by (9 Hearings 3688), keeping in walkie-talkie communication with Alfred Baldwin (Hunt Executive Session, September 10, 1973, pp. 37-38) who served as a lookout across the street from the Watergate complex in the Howard Johnson Motorlodge. (1 Hearings 402) The mission was ill-fated. Within a short time after the breakin, a Washington Metropolitan Police Department plainclothes unit, using an unmarked police car, responded to a call to assist a guard at the Watergate Office Building. (1 Hearings 96) the guard, Frank Wills, had become suspicious when for the second time that night he found masking tape on the edge of a door in the garage leadint to the office building. (Wills Interview, May 22, 1973, pp.2-3) The tape had been placed to hold back the locking mechanism, permitting the door to be opened with the use of the key. (1 Hearings 98, 103) Earlier that night Wills had removed tape from the same door thinking it had been put on by a building engineer who had forgotten to take it off. (Wills Interview, May 22, 1973, pp.1-2) 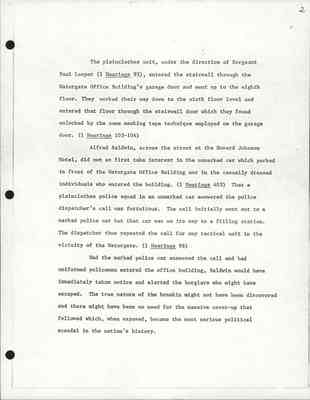 The plainclothes unit, under the direction of Sergeant Paul Leeper (1 Hearings 95), entered the stairwell through the Watergate Office Building's garage door and went up to the eighth floor. They worked their way down to the sixth floor level and entered that floor through the stairwell door which they found unlocked by the same masking tape technique employed on the garage door. (1 Hearings 103-104)

Alfrew Baldwin, across the street at the Howard Johnson Motel, did not at first take interest in the unmarked car which parked in front of the Watergate Office Building nor in the casually dressed individuals who entered the building. (1 Hearings 403) That a plainclothes police squad in an unmarked car answered the police dispatcher's call was fortuitous. The call initially went out to a marked police car but that car was on its way to a filling station. The dispatcher thus repeated the call for any tactical unit in the vicinity of the Watergate (1 Hearings 96)

Had the marked police car answered the call and had uniformed policemen entered the office building, Baldwin would have immediately taken notice and alerted the burglars who might have escaped. The true nature of the breakin might not have been discovered and there might have been no need for the massive cover-up that followed which, when exposed, became the most serious political scandal in the nation's history. 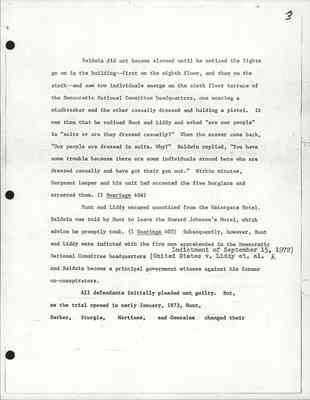 Baldwin did not become alarmed until he noticed the lights go on in the building--first the eighth floor, and then on the sixth--and saw two individuals emerge on the sixth floor terrace of the Democratic National Committee headquarters, one wearing a windbreaker and the other casually dressed and holding a pistol. It was then that he radioed Hunt and Liddy and asked "are our people" in "suits or are they dressed casually?" When the answer came back, "Our people are dressed in suits. Why?" Baldwin replied, "You have some trouble because there are some individuals around here who are dressed casually and have got their gun out." Within minutes, Sergeant Leeper and his unit and accosted the five burglars and arrested them. (1 Hearings 404)

Hunt and Lidy escaped unnoticed from the Watergate Hotel. Baldwin was told by Hunt to leave the Howard Johnson's Motel, which advice he promptly took. (1 Hearings 405) Subsequently, however, Hunt and Liddy were indicted with the five men apprehended in the Deomcratic National Committee headquarters (United States v. Liddy et. al. Indictment of September 15, 1972) and Baldwin became a principal government witness against his former co-conspirators.

All defendants initially pleaded not guilty. But, as the trial opened in early January, 1973, Hunt, Barker, Sturgis, Martinez, and Gonzales changed their 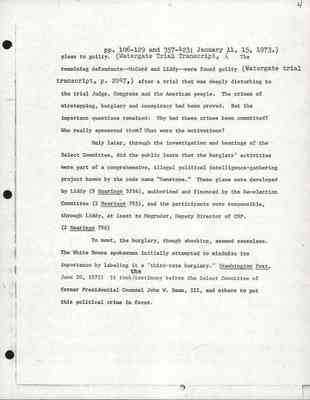 4 pleas to guilty. (Watergate Trial Transcript, pp. 106-129 and 357-423; January 11, 15, 1973.) The remaining defendants--McCord and Liddy--were found guilty (Watergate trial transcript, p. 2247,) after a trial that was deeply distrubing to the trial Judge, Congress and the American people. The crimes of wiretapping, burglary and conspiracy had been proved. But the important questions remained: Why had these crimes been commiteed? Who really sponsored them? What were the motivations?

Only later, through the investigation and hearings of the Select Committee, did the public learn that the burglars' activities were part of a comprehensive, illegal political intelligence-gatehring project known by the code name "Gemstone." These plans were developed by Liddy (9 Hearings 3374), authorized and financed by the Re-election Committee (2 Hearings 795), and the participants were responsible, through Liddy, at least to Magruder, Deputy Director of CRP. (2 Hearings 796)

To most, the burglary, though shocking, seemed senseless. The White House spokesmen initially attempted to minimize its importance by labing it a "third-rate burglary." (Washington Post, June 20, 1972) It took the testimony before the Select Committe of former Presidential Counsel John W. Dean, III, and others to put this political crime in focus.

5 The Pre-Watergate Atmosphere At The White House

The Watergate breakin cannot be understood unless it is seen in the context of similar White House activities. Practically from the beginning of Richard Nixon's first term as President, a small group of men, holding powerful positions directly under the President, developed a philosophy that saw the President as above the laws that govern other citizens. It appeared to be their view that the President, by invoking national or internal security, could violate even the criminal law. This philosophy guided the activities of H.R. Haldeman, John Ehrlichman and John Dean, among others. It was accepted by the Attorney General, John Mitchell.

The earliest proof that this concept of Presidential power existed is found in the 1970 top secret document entitled Operational Restraints on Intelligence Collection (Exhibit 35, 3 Hearings 1062, 1319) and the various memoranda from Mr. Tom Charles Huston to H.R. Haldeman which were first revealed by John Dean. (Exhibits 36-40, 42, 3 Hearings 1062, 1324-33, 1338) In preparation for his testimony before the Select Committee, Dean placed these papers, some of which bore the highest security classification, in the custody of Chief Judge John Sirica of the United States District Court for the District of Columbia. This step was taken by Dean, on the advice of his