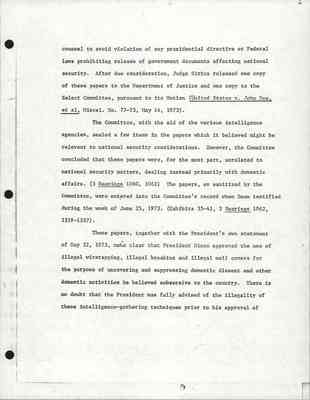 6 counsel to avoid violation of any presidential directive or Federal laws prohibiting release of government documents affecting national security. After due consideration, Judge Sirica released one copy of these papers to the Department of Justice and one copy to the Select Committee, pursuant to its Motion (United States v. John Doe, et al, Miscel. No. 77-73, May 14, 1973).

The Committee, with the aid of the various intelligence agencies, sealed a few items in the papers which it believed might be relevant to national security considerations. However, the Committee concluded that these papers were, for the most part, unrelated to national security matters, dealing instead primarily with domestic affairs. (3 Hearings 1060, 1062) The papers, as sanitized by the Committee, were entered into the Committee's record when Dean testified during the week of June 25, 1973. (Exhibits 35-41, 3 Hearings 1062, 1319-1337)

These papers, together with the President's own statement of May 2, 1973 make clear that President Nixon approved the use of illegal wiretapping, illegal breakins and illegal mail covers for the purpose of uncovering and suppressing domestic dissent and other domestic activities he believed subversive to the country. There is no doubt that the President was fully advised of the illegality of these intelligence-gathering techniques prior to his approval of 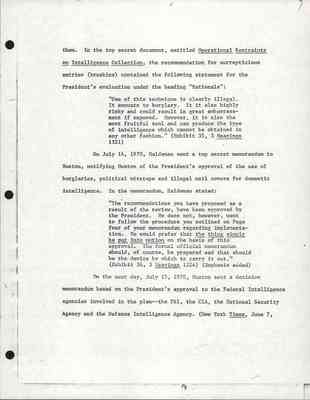 7 them. In the top secret document, entitled Operational Restraints on Intelligence Collection, the recommendation for surrepticious entries (breakins) contained the following statement for the President's evaluation under the heading "Rationale": "Use of this technique is clearly illegal. It amounts to burglary. It it also highly risky and could result in great embarrassment if exposed. However, it is also the most fruitful tool and can produce the type of intelligence which cannot be obtained in any other fashion." (Exhibit 35, 3 Hearings 1321)

On July 14, 1970, Haldeman sent a top secret memorandum to Huston, notifying Huston of the President's approval of the use of burglaries, political wiretaps and illegal mail covers for domestic intelligence. In the memorandum, Haldeman stated: "The recommendations you have proposed as a result of the review, have been approved by the President. He does not, however, want to follow the procedure you outlined on Page four of your memorandum regarding implementation. He would prefer that the thing simply be put into motion on the basis of this approval. The formal official memorandum should, of course, be prepared and that should be the device by which to carry it out." (Exhibit 36, 3 Hearings 1324) (Emphasis added)

On the next day, July 15, 1970, Huston sent a decision memorandum based on the President's approval to the Federal Intelligence agencies involved in the plan--the FBI, the CIA, the National Security Agency and the Defense Intelligence Agency. (New York Times, June 7, 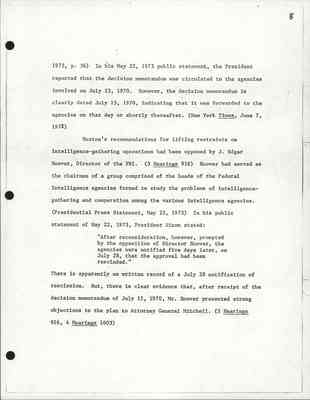 Huston's recommendations for lifting restraints on intelligence-gathering operations had been opposed by J. Edgar Hoover, Director of the FBI. (3 Hearings 916) Hoover had served as the chairman of a group comprised of the heads of the Federal Intelligence agencies formed to study the problems of intelligencegathering and cooperation among the various intelligence agencies. (Presidential Press Statement, May 22, 1973) In his public statement of May 22, 1973, President Nixon stated: "After reconsideration, however, prompted by the opposition of Director Hoover, the agencies were notified five days later, on July 28, that the approval had been rescinded." There is apparently no written record of a July 28 notification of rescission. But, there is clear evidence that, after the receipt of the decision memorandum of July 15, 1970, Mr. Hoover presented strong objections to the plan to Attorney General Mitchell. (3 Hearings 916, 4 Hearings 1603) 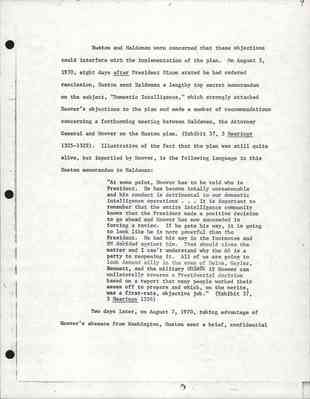 Huston and Haldeman were concerned that these objections could interfere with the implementation of the plan. On August 5, 1970, eight days after President Nixon stated he had ordered rescission, Huston sent Haldeman a lengthy top secret memorandum on the subject, "Domestic Intelligence," which strongly attacked Hoover's objections to the plan and made a number of recommendations concerning a forthcoming meeting between Haldeman, the Attorney General and Hoover on the Huston plan. (Exhibit 37, 3 Hearings 1325-1329). Illustrative of the fact that the plan was still quite alive, but imperiled by Hoover, is the following language in this Huston memorandum to Haldeman: "At some point, Hoover has to be told who is President. He has become totally unreasonable and his conduct is detrimental to our domestic intelligence operations ... It is important to remember that the entire intelligence community knows that the President made a positive decision to go ahead and Hoover has now succeeded in forcing a review. If he gets his way, it is going to look like he is more powerful than the President. He had his say in the footnotes and RN decided against him. That should close the matter and I can't understand why the AG is a party to reopening it. All of us are going to look damned silly in the eyes of Helms, Gayler, Bennet, and the military chiefs if Hoover can unilaterally reverse a Presidential decision based on a report that many people worked their asses off to prepare and which, on the merits, was a first-rate, objective job." (Exhibit 37, 3 Hearings 1326) 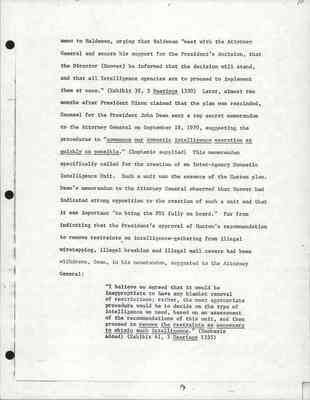 10 memo to Haldeman, urging that Haldeman "meet with the Attorney General and secure his support for the President's decision, that the Director (Hoover) be informed that the decision will stand, and that all Intelligence agencies are to proceed to implement them at once." (Exhibit 38, 3 Hearings 1330) Later, almost two months after President Nixon claimed that the plan was rescinded, Counsel for the President John Dean sent a top secret memorandum to the Attorney General on September 18, 1970, suggesting the procedures to "commence our domestic intelligence operation sa quickly as possible." (Emphasis supplied) This memorandum specifically called for the creation of an Inter-agency Domestic Intelligence Unit. Such a unit was the essence of the Huston plan. Dean's memorandum to the Attorney General observed that Hoover had indicated strong opposition to the creation of such a unit and that it was important "to bring the FBI fully on board." Far from indicating that the President's approval of Huston's recommendation to remove restraints on intelligence-gathering from illegal wiretapping, illegal breakins and illegal mail covers had been withdrawn, Dean, in his memorandum, suggested to the Attorney General: "I believe we agreed that it would be inappropriate to have any blanket removal of restrictions; rather, the most appropriate procedure would be to decide on the type of intelligence we need, based on an assesment of the recommendations of this unit, and then proceed to remove the restraints as necessary to obtain such intelligence." (Emphasis added) (Exhibit 41, 3 Hearings 1335)