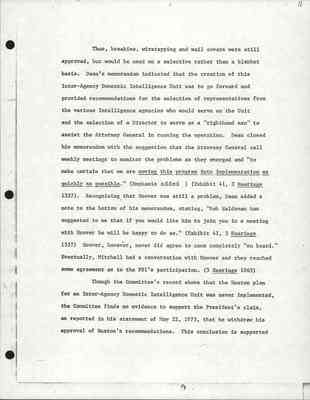 Thus, the breakins, wiretappings and mail covers were still approved, but would be used on a selective rather than a blanket basis. Dean's memorandum indicated that the creation of this Inter-Agency Domestic Intellligence Unit was to go forward and provided recommendations for the selection of representatives from the various Intelligence agencies who would serve on the Unite and the selection of a Director to serve as a "righthand man" to assist the Attorney General in running the operation. Dean closed his memorandum with the suggestion that the Attorney General call weekly meetings to monitor the problems as they emerged and "to make certain that we are moving this program into implementation as quickly as possible." (Emphasis added ) (Exhibit 41, 3 Hearings 1337). Recognizing that Hoover was still a problem, Dean added a not to the bottom of his memorandum, stating, "Bob Haldeman has suggested to me that if you would like him to join you in a meeting with Hoover he will be happy to do so." (Exhibit 41, 3 Hearings 1337) Hoover, however, never did come completely "on board." Eventually, Mitchell had a conversation with Hoover and they reached some agreement as to the FBI's participation. (3 Hearings 1065)

Though the Committee's record shows that the Huston plan for an Inter-Agency Domestic Intelligence unit was never implemented, the Committee finds no evidence to support the President's claim, as reported in his statement of May 22, 1973, that he withdrew his approval of Huston's recommendations. This conclusion is supported 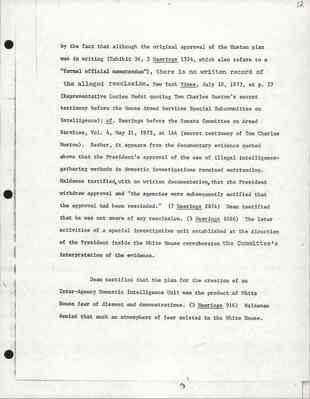 12 by the fact that although the original approval of the Huston plan was in writing (Exhibit 36, 3 Hearings 1324, which also refers to a "formal official memorandum"), there is no written record of the alleged rescission. New York Times, July 10, 1973 at p. 27 (Representative Lucien Nedzi quoting Tom Charles Huston's secret testimony before the House Armed Services Special Subcommittee on Intelligence); cf. Hearings before the Senate Committee on Armed Services, Vol. 4, May 21, 1973, at 144 (secret testimony of Tom Charles Huston). Rather, it appears from the documentary evidence quoted above that the President's approval of the use of illegal intelligencegathering methods in domestic investigations remained outstanding. Haldeman testified, with no written documentation, that the President withdrew approval and "the agencies were subsequently notified that the approval had been rescinded." (7 Hearings 2874) Dean testified that he was not aware of any rescission. (3 Hearings 1066) The later activities of a special investigative unit established at the direction of the President inside the White House corroborates the Committee's interpretation of the evidence.

Dean testified that the plan for the creation of an Inter-Agency Domestic Intelligence Unit was the product of White House fear of dissent and demonstrations. (3 Hearings 916) Haldeman denied that such an atmostphere of fear existed in the White House. 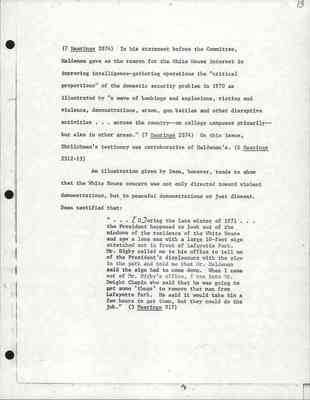 13 (7 Hearings 2874) In his statement before the Committee, Haldeman gave as the reason for the White House interest in imporving intelligence-gathering operations the "critical proportions" of the domestic security problem in 1970 as illustrated by "a wave of bombings and explosions, rioting an violence, demonstrations, arson, gun battles and other disruptive activities ... across the country--on college campuses primarily-- but also in other areas." (7 Hearings 2874) On this issue, Ehrlichman's testimony was corroborative of Haldeman's. (6 Hearings 2512-13)

An illustration given by Dean, however, tends to show that the White House concern was not only directed toward violent demonstrations, but to peaceful demonstrations or just dissent. Dean testified that: "... [D]uring the late winter of 1971 ... the President happened to look out of the windows of the residence of the White House and saw a lone man with a large 10-foot sign stretched out in front of Lafayette Park. Mr. Higby called me to his office to tell me of the President's displeasure with the sign in the park and told me that Mr. Haldeman said the sign had to come down. When I came out of Mr. Higby's office, I ran into Mr. Dwight Chapin who said that he was going to get some 'thugs' to remove that man from Lafayette Park. He said it would take him a few hours to get them, but they could do the job." (3 Hearings 917) 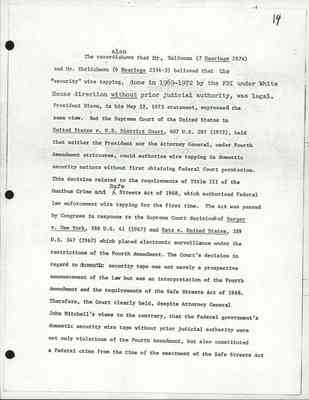 The record also shows that Mr. Haldeman (7 Hearings 2874) and Mr. Ehrlichman (6 Hearings 2534-5) believed that the "security" wire tapping, done in 1969-1972 by the FBI under White House direction without prior judicial authority, was legal. President Nixon, in his May 22, 1973 statement, expressed the same view. But the Supreme Court of the United States in United States v. U.S. District Court, 407 U.S. 297 (1972), held that neither the President nor the Attorney General, under Fourth Amendment strictures, could authorize wire tapping in domestic security matters without first obtaining Federal Court permission. This decision related to the requirements of Title III of the Omnibus Crime and Safe Streets Act of 1968, which authorized Federal law enforcement wire tapping for the first time. The Act was passed by Congress in response to the Supreme Court decisions of Berger v. New York, 388 U.S. 41 (1967) and Katz v. United States, 389 U.S. 347 (1967) which placed electronic surveillance under the restrictions of the Fourth Amendment. The Court's decision in regard to domestic security taps was not merely a prospective announcement of the law but was an interpretation of Fourth Amendment and the requirements of the Safe Streets Act of 1968. Therefore, the Court clearly held, despite Attorney General John Mitchell's views to the contrary, that the Federal government's domestic security wire taps without prior judicial authority were not only violations of the Fourth Amendment, but also constituted a Federal crime from the time of the enactment of the Safe Streets Act 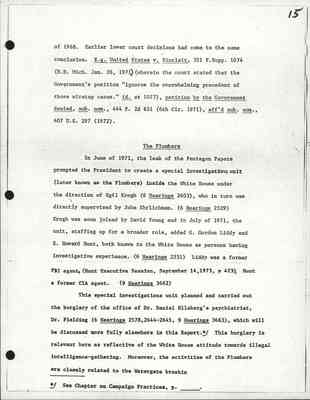 In June of 1971, the leak of the Pentagon Papers prompted the President to create a special investigations unit (later known as the Plumbers) inside the White House under the direction of Egil Krogh (6 Hearings 2603), who in turn was directly supervised by John Ehrlichman. (6 Hearings 2529) Krogh was soon joined by David Young and in July of 1971, the unit, staffing up for a broader role, added G. Gordon Liddy and E. Howard Hunt, both known to the White House as persons having investigative experience. (6 Hearings 2531) Liddy was a former FBI agent, (Hunt Executive Session, September 14, 1973, p 423), Hunt a former CIA agent. (9 Hearings 3662)

This special investigations unit planned and carried out the burglary of the office of Dr. Daniel Ellsberg's psychiatrist, Dr. Fielding (6 Hearings 2578,2644-2645, 9 Hearings 3663), which will be discussed more fully elsewhere in this Report.*/ This burglary is relevant here as reflective of the White House attitude towards illegal intelligence-gathering. Moreover, the activities of the Plumbers are closely related to the Watergate breakin