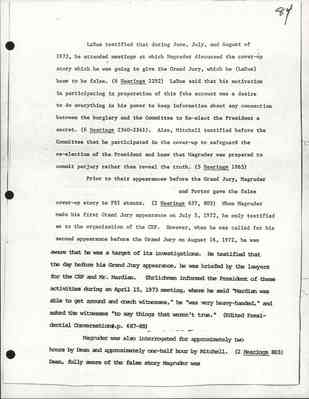 LaRue testified that during June, July, and August of 1972, he attended meetings at which Magruder discussed the cover-up story which he was going to give to the Grand Jury, which he (LaRue) knew to be false. (6 Hearings 2292) LaRue said that his motivation in participating in preparation of this fake account was a desire to do everything in his power to keep information about any connection between the burglary and the Committee to Re-elect the President a secret. (6 Hearings 2340-2341). Also, Mitchell testified before the Committee that he participated in the cover-up to safeguard the re-election of the President and knew that Magurder was prepared to commit perjury rather than reveal the truth. (5 Hearings 1865)

Prior to their appearances before the Grand Jury, Magruder and Porter gave the false cover-up story to FBI agents. (2 Hearings 637, 803) When Magruder made his first Grand Jury appearance on July 5, 1972, he only testified as to the organization of the CRP. However, when he was called for his second appearance before the Grand Jury on August 16, 1972, he was aware that he was a target of its investigaions. He testified that the day before his Grand Jury appearance, he was briefed by the lawyers for the CRP and Mr. Mardian. Ehrlichman informed the President of these activities during an April 15, 1973 meeting, where he said "Mardian was able to get around and coach witnesses," he "was very heavy-handed," and asked the witnesses "to say things that weren't true." (Edited Presidential Coversations,p. 687-88) 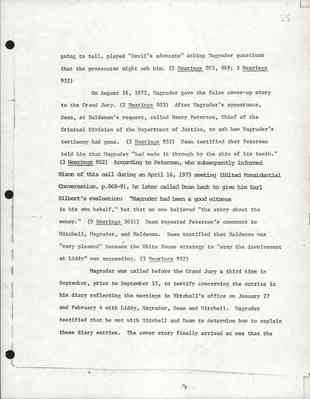 On August 16, 1972, Magruder gave the false cover-up story to the Grand Jury. (2 Hearings 803) After Magruder's appearance, Dean, at Haldeman's request, called Henry Petersen, Chief of the Criminal Division of the Department of Justice, to ask how Magruder's testimony had gone. (3 Hearings 952) Dean testified that Petersen told him that Magruder "had made it through by the skin of his teeth." (3 Hearings 952) According to Petersen, who subsequently informed Nixon of this call during an April 16, 1973 meeting (Edited Presidential Conversation, p.868-9), he later called Dean back to give him Earl Silbert's evaluation: "Magruder had been a good witness in his own behalf," but that no one believed "the story about the money." (9 Hearings 3651) Dean repeated Petersen's comments to Mitchell, Magruder, and Haldeman. Dean testified that Haldeman was "very pleased" because the White House strategy to "stop the involvement at Liddy" was succeeding. (3 Hearings 952)

Magruder was called before the Grand Jury a third time in September, prior to September 15, to testify concerning the entries in his diary reflecting the meetings in Mitchell's office on January 27 and February 4 with Liddy, Magruder, Dean and Mitchell. Magruder testified that he met with Mitchell and Dean to determine how to explain these diary entries. The cover story finally arrived at was that the 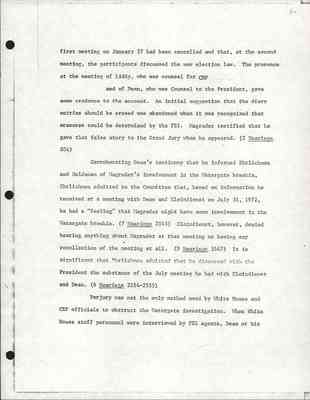 86 first meeting on January 27 had been cancelled and that, at the second meeting, the participants discussed the new election law. The presence at the meeting of Liddy, who was counsel for CRP

and of Dean, who was Counsel to the President, gave some credence to the account. An initial suggestion that the diary entries should be erased was abandoned when it was recognized that erasures could be determined by the FBI. Magruder testified that he gave that false story to the Grand Jury when he appeared. (2 Hearings 804)

Corroborating Dean's testimony that he informed Ehrlichman and Haldeman of Magruder's involvement in the Watergate breakin, Ehrlichman admitted to the Committee that, based on information he received at a meeting with Dean and Kleindienst on July 31, 1972, he had a "feeling" that Magruder might have some involvement in the Watergate breakin. (7 Hearings 2845) Kleindienst, however, denied hearing anything about Magruder at that meeting or having any recollection of the meeting at all. (9 Hearings 3567) It is significant that Ehrlichman admitted that he discussed with the President the substance of the July meeting he had with Kleindienst and Dean. (6 Hearings 2554-2555)

Perjury was not the only method used by White House and CRP officials to obstruct the Watergate investigation. When White House staff personnel were interviewed by FBI agents, Dean or his 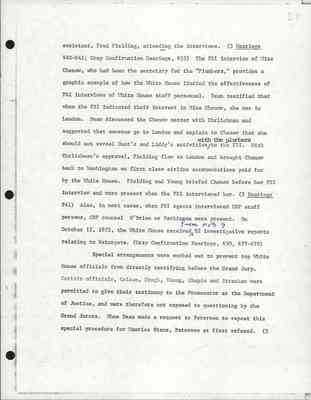 87 assistant, Fred Fielding, attending the interviews. (3 Hearings 940-941; Gray Confirmation Hearings, 653) The FBI interview of Miss Chenow, who had been the secretary for the "Plumbers," provides a graphic example of how the White House limited the effectiveness of FBI interviews of White House staff personel. Dean testified that when the FBI indicated their interest in Miss Chenow, she was in London. Dean discussed the Chenow matter with Ehrlichman and suggested that someone go to London and explain to Chenow that she should not reveal Hunt's and Liddy's activities/with the plumbers to the FBI. With Ehrlichman's approval, Fielding flew to London and brought Chenow back to Washington on first class airline accomodations paid for by the White House. Fielding and Young briefed Chenow before her FBI interview and were present when the FBI agents interviewed her. (3 Hearings 941) Also, in most cases, when FBI agents interviewed CRP staff persons, CRP counsel O'Brien or Parkinson were present. On October 12, 1972, the White House received from FBI 82 investigative reports relating to Watergate. (Gray Confirmation Hearings, 630, 677-678)

Special arrangements were worked out to prevent top White House officials, Coulsoon, Krogh, Young, Chapin and Strachan were permitted to give their testimony to the Prosecutor at the Department of Justice, and were therefore not exposed to questioning by the Grand Jurors. When Dean made a request to Petersen to repeat this special procedure for Maurice Stans, Petersen at first refused. (3 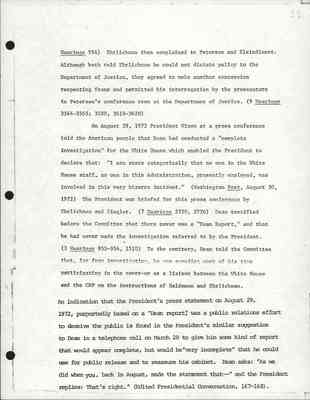 On August 29, 1972 President Nixon at a press conference told the American people that Dean had conducted a "complete investigation" for the White House which enabled the President to declare that: "I can state categorically that no one in the White House staff, no one in this Administration, presently employed, was involved in this very bizarre incident." (Washington Post, August 30, 1972) The President was briefed for this press conference by Ehrlichman and Ziegler. (7 Hearings 2720, 2726) Dean testified before the Committee that there never was a "Dean Report," and that he had never made the investigation referred to by the President. (3 Hearings 955-956, 1510) To the contrary, Dean told the Committee that, far from investigating, he was spending most of his time participating in the cover-up as a liason between the White House and the CRP on the instructions of Haldeman and Ehrlichman. An indication that the President's press statement on August 29, 1972, purportedly based on a "Dean report," was a public relations effort to deceive the public is found in the President's similar suggestion to Dean in a telephon call on March 20 to give him some kind of report that would appear complete, but would be "very incomplete" that he could use for public release and to reassure his cabinet. Dean asks: "As we did when you, back in August, made the statement that--" and the President replies: That's right" (Edited Presidential Conversation, 167-168).