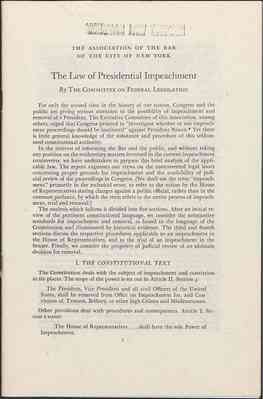 THE ASSOCIATIONOF THE BAR OF THE CITY OF NEW YORK

The Law of Presidential Impeachment

By The COMMITTEE ON FEDERAL LEGISLATION

For only the second time in the history of our nation, Congress and the public are giving serious attention to the possibility of impeachment and removal of a President. The Executive Committee of this Association, among others, urged that Congress proceed to "investigate whether or not impeachment proceedings should be instituted" against President Nixon.• Yet there is little general knowledge of the substance and procedure of this seldomused constitutional authority.

In the interest of informing the Bar and the public, and without taking any position on the evidentiary matters involved in the current impeachment controversy, we have undertaken to prepare this brief analysis of the applicable law. The report expresses our views on the controverted legal issues concerning proper grounds for impeachment and the availability of judicial review of the proceedings in Congress. (We shall use the term "impeach- ment" primarily in the technical sense, to refer to the action by the House of Representatives stating charges against a public official, rather than in the common parlance, by which the term refers to the entire process of impeachment, trial and removal.)

The analysis which follows is divided into five sections. After an initial review of the pertinent constitutional language, we consider the substantive standards for impeachment and removal, as found in the language of the Constitution and illuminated by historical evidence. The third and fourth sections discuss the respective procedures applicable to an impeachment in the House of Representatives, and to the trial of an impeachment in the Senate. Finally, we consider the propriety of judicial review of an ultimate decision for removal.

I. THE CONSTITUTIONAL TEXT

The Constitution deals with the subject of impeachment and conviction at six places. The scope of the power is set out in Article II, Section 4:

The President, Vice President and all civil Officers of the United States, shall be removed from Office on Impeachment for, and Conviction of, Treason, Bribery, or other high Crimes and Misdemeanors.

Other provisions deal with procedures and consequences. Article I , Section 2 states:

The House of Representatives ... shall have the sole Power of Impeachment. 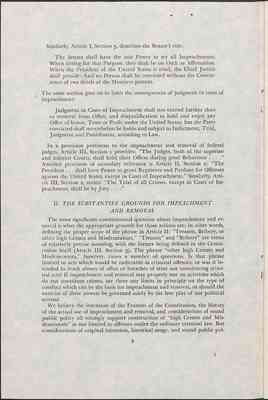 The Senate shall have the sole Power to try all Impeachments. When sitting for that Purpose, they shall be on Oath or Affirmation. When the President of the United States is tried, the Chief Justice shall preside: And no Person shall be convicted without the Concurrence of two thirds of the Members present.

The same section goes on to limit the consequences of judgment in cases of impeachment:

Judgment in Cases of Impeachment shall not extend further than to removal from Office, and disqualification to hold and enjoy any Office of honor, Trust or Profit under the United States: but the Party convicted shall nevertheless be liable and subject to Indictment, Trial, Judgment and Punishment, according to Law.

In a provision pertinent to the impeachment and removal of federal judges, Article III, Section 1 provides: "The Judges, both of the supreme and inferior Courts, shall hold their Offices during good Behaviour .... " Another provision of secondary relevance is Article II, Section 2: "The President ... shall have Power to grant Reprieves and Pardons for Offenses against the United States, except in Cases of Impeachment." Similarly, Article III, Section 2, states: "The Trial of all Crimes, except in Cases of Im-peachment, shall be by Jury .... "

II. THE SUBSTANTIVE GROUNDS FOR IMPEACHMENT AND REMOVAL

The most significant constitutional question about impeachment and removal is what the appropriate grounds for those actions are; in other words, defining the proper cope of the phrase in Article II: "Treason, Bribery, or other high Crimes and Misdemeanors." ''Treason" and "Bribery" are terms of relatively precise meaning, with the former being defined in the Constitution itself (Article III, Section 3). The phrase "other high Crimes and Misdemeanors," however, raises a number of questions. Is that phrase limited to acts which would be indictable as criminal offenses, or was it intended to reach abuses of office or breaches of trust not constituting criminal acts? If impeachment and removal may properly rest on activities which do not constitute crimes, are there any limits in principle on the type of conduct which can be the basis for impeachment and removal, or should the exercise of these power be governed solely by the free play of our political system?

We believe the intention of the Framers of the Constitution, the history of the actual use of impeachment and removal, and considerations of sound public policy all strongly support construction of "high Crimes and Misdemeanors" as not limited to offenses under the ordinary criminal law. But considerations of original intention, historical usage, and sound public pol- 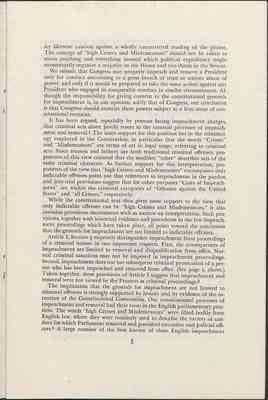 icy likewise caution against a wholly unrestricted reading of the phrase. The concept of "high Crimes and Misdemeanors" should not be taken to mean anything and everything around which political expediency might momentarily organize a majority in the House and two-thirds in the Senate.

We submit that Congress may properly impeach and remove a President only for conduct amounting to a gross breach of trust or serious abuse of power, and only if it would be prepared to take the same action against any President who engaged in comparable conduct in similar circumstances. Although the responsibility for giving content to the constitutional grounds for impeachment is, in our opinion, solely that of Congress, our conclusion is that Congress should exercise these powers subject to a firm sense of constitutional restraint.

It has been argued, especially by persons facing impeachment charges, that criminal acts alone justify resort to the unusual processes of impeachment and removal.1 The main support for this position lies in the terminology employed in the Constitution, in particular that the words "Crimes" and "Misdemeanors" are terms of art in legal usage, referring to criminal acts. Since treason and bribery are both traditional criminal offenses, proponents of this view contend that the modifier "other" describes acts of the same criminal character. As further support for this interpretation, proponents of the view that "high Crimes and Misdemeanors" encompasses only indictable offenses point out that references to impeachment in the pardon and jury-trial provisions suggest that for other purposes "Cases of Impeachment" are within the criminal categorie of "Offenses against the United States" and "all Crimes," respectively.

While the constitutional text thus gives some support to the view that only indictable offenses can be "high Crimes and Misdemeanors," it also contains provisions inconsistent with so narrow an interpretation. Such provisions, together with historical evidence and precedents in the few impeachment proceedings which have taken place, all point toward the conclusion that the grounds for impeachment are not limited to indictable offenses.

Article I, Section 3 expressly distinguishes impeachment from proceedings of a criminal nature in two important respects. First, the consequences of impeachment are limited to removal and disqualification from office. Normal criminal sanctions may not be imposed in impeachment proceedings. Second, impeachment does not bar subsequent criminal prosecution of a person who has been impeached and removed from office. (See page 2, above.) Taken together, these provisions of Article I suggest that impeachment and removal were not viewed by the Framers as criminal proceedings.2

The implication that the grounds for impeachment are not limited to criminal offenses is strongly supported by history and by evidence of the intention of the Constitutional Convention. Our constitutional processes of impeachment and removal had their roots in the English parliamentary practices. The words "high Crimes and Misdemeanors" were lifted bodily from English law, where they were routinely used to describe the variety of conduct for which Parliament removed and punished executive and judicial officers.3 A large number of the best known of these English impeachment 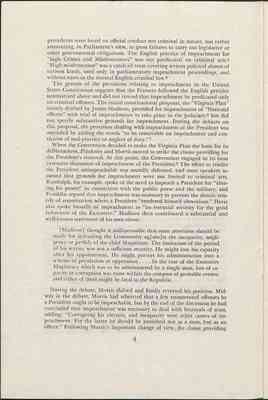 precedents were based on official conduct not criminal in nature, but rather amounting, in Parliament's view, to gross failures to carry out legislative or other governmental obligations. The English practice of impeachment for "high Crimes and Misdemeanors" was not predicated on criminal acts. 4 "High misdemeanor" was a catch-all term covering serious political abuses of various kinds, used only in parliamentary impeachment proceeding, and without roots in the normal English criminal law.5

The genesis of the provisions relating to impeachment in the United States Constitution suggests that the Framers followed the English practice summarized above and did not intend that impeachment be predicated only on criminal offenses. The initial constitutional proposal, the "Virginia Plan" mainly drafted by James Madison, provided for impeachment of "National officers" with trial of impeachments to take place in the judiciary,6 but did not specify substantive grounds for impeachment. During the debates on this proposal, the provision dealing with impeachment of the President was amended by adding the words "to be removable on impeachment and conviction of mal-practice or neglect of duty." 7

When the Convention decided to make the Virginia Plan the basis for its deliberations, Pinckney and Morris moved to strike the clause providing for the President's removal. At this point, the Convention engaged in it most extensive discusion of impeachment of the President.8 The effort to render the President unimpeachable was soundly defeated, and most speakers assumed that grounds for impeachment were not limited to criminal acts. Randolph, for example, spoke of the need to impeach a President for "abusing his power" in connection with the public purse and the military, and Franklin argued that impeachment was necessary to prevent the drastic remedy of assassination where a President "rendered himself obnoxious." Davie also spoke broadly of impeachment as "an essential security for the good behaviour of the Executive." Madison then contributed a substantial and well-known statement of his own views:

[ Madison ] thought it indispensable that some provision should be made for defending the Community ag[ainJ st the incapacity, negligence or perfidy of the chief Magistrate. The limitation of the period of his service was not a sufficient security. He might lose his capacity after his appointment. He might pervert his administration into a Magistracy which was to be administered by a single man, loss of capacity or corruption was more within the compass of probable events, and either of them might be fatal to the Republic.

heme of pc ulation or oppres ion .. . . In the case of the Executive

During the debate, Morris shifted and finally reversed his position. Midway in the debate, Morris had admitted that a few enumerated offenses by a President ought to be impeachable, but by the end of the discussion he had concluded that impeachment was necessary to deal with betrayals of trust, adding: "Corrupting his electors, and incapacity were other causes of impeachment. For the latter he should be punished not as a man, but as an officer." Following Morris's important change of view, the clause providing