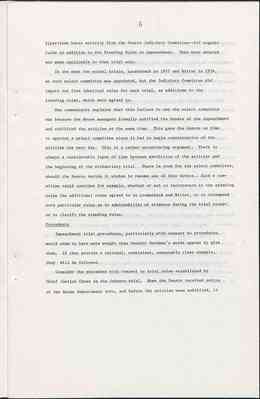 bipartisan basis entirely from the Senate Judiciary Committee--did suggest rules in addition to the Standing Rules on impeachment. They were adopted and made applicable to that trial only.

In the next two actual trials, Louderback in 1933 and Ritter in 1936, no such select committee was appointed, but the Judiciary Committee did report out five identical rules for each trial, as additions to the standing rules, which were agreed to.

One commentator explains that this failure to use the select committee was because the House managers formally notified the Senate of the impeachment and exhibited the articles at the same time. This gave the Senate no time to appoint a select committee since it had to begin consideration of the articles the next day. This is a rather unconvincing argument. There is always a considerable lapse of time between exhibition of the articles and the beginning of the evidentiary trial. There is room for the select committee, should the Senate decide it wishes to resume use of this device... Such a committee could consider for example, whether or not to incorporate in the standing rules the additional rules agreed to in Louderback and Ritter, or to recommend more particular rules as to admissability of evidence during the trial proper, or to clarify the standing rules.

Impeachment trial precedents, particularly with respect to procedures, would seem to have more weight than Senator Bachman's words appear to give them. If they provide a rational, consistent, reasonably clear example, they will be followed.

Consider the precedent with respect to trial rules established by Chief Justice Chase in the Johnson trial. When the Senate received notice of the House impeachment vote, and before the articles were exhibited, it 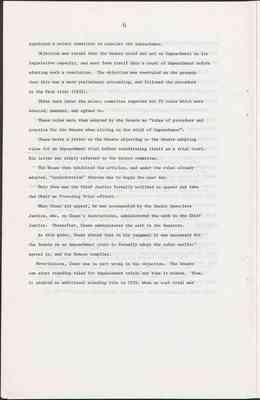 appointed a select committee to consider the impeachment.

Objection was raised that the Senate could not act on impeachment in its legislative capacity, and must form itself into a court of impeachment before adopting such a resolution. The objection was overruled on the grounds that this was a mere preliminary proceeding, and followed the procedure in the Peck trial (1832).

Three days later the select committee reported out 25 rules which were debated, amended, and agreed to.

These rules were the adopted by the Senate as "rules of procedure and practice for the Senate when sitting on the trial of impeachment".

Chase wrote a letter to the Senate objecting to the senate adopting rules for an impeachment trial before constituting itself as a trial court. His letter was simply referred to the select committee.

The House then exhibited the articles, and under the rules already adopted, "consideration" thereon was to begin the next day.

Only then was the Cief Justice formally notified to appear and take the Chair as Presiding Trial officer.

At this point, Chase stated that in his judgment it was necessary for the Senate as an impeachment court to formally adopt the rules earlier agreed to, and the Senate complied.

Nevertheless, Chase was in part wrong in his obection. The senate can adopt standing rules for impeachment trials any time it wishes. Thus, it adopted an additional standing rule in 1935, when no such trial was 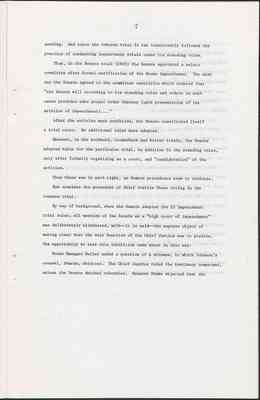 pending. And since the Johnson trial it has consistently followed the practice of conducting impeachment trials under its standing rules.

Thus, in the Senate trial (1905) the Senate appointed a select committee after formal notification of the House impeachment. The next day the Senate agreed to the committee resolution which ordered that "the Senate will according to its standing rules and orders in such cases provided take proper order thereon (upon presentation of the articles of impeachment)...."

After the articles were exhibited, the Senate constituted itself a trial court. No additional rules were adopted.

However, in the Archbald, Louderback and Ritter trials, the Senate adopted rules for the particular trial, in addition to the standing rules, only after formally organizing as a court, and "consideration" of the articles.

Thus Chase was in part right, as Senate precedents seem to indicate.

Now consider the precedent of Chief Justice Chase voting in the Johnson trial.

By way of background, when the Senate adopted the 25 impeachment trial rules, all mention of the Senate as a "high court of impeachment" was deliberately eliminated, with--it is said--the express object of making clear that the only function of the Chief Justice was to preside. The opportunity to test this inhibition came about in this way:

House Manager Butler asked a question of a witness, to which Johnson's counsel, Evarts, objected. The Chief Justice ruled the testimony competent, unless the Senate decided otherwise. Senator Drake objected that the 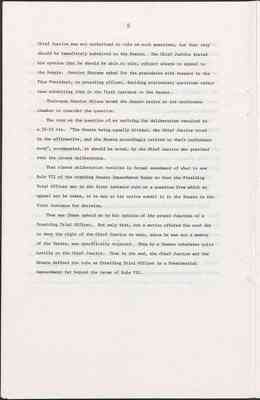 Chief Justice was not authorized to rule on such questions, but that they should be immediately submitted to the Senate. The Chief Justice stated his opinion that he should be able to rule, subject always to appeal to the Senate. Senator Sherman asked for the precedents with respect to the Vice President, as presiding officer, deciding preliminary questions rather than submitting them in the first instance of the Senate.

Thereupon Senator Wilson moved the Senate retire to its conference chamber to consider the question.

The vote on the question of so retiring for deliberation resulted in a 25-25 tie. "The Senate being equally divided, the Chief Justice voted in the affirmative, and the Senate accordingly retired to their conference room", accompanied, it should be noted, by the Chief Justice who presided over the closed deliberation.

That closed deliberation resulted in formal amendment of what is now Rule VII of the standing Senate Impeachment Rules so that the Presiding Trial Officer may in the first instance rule on a question from which an appeal may be taken, or he may at his option submit it to the Senate in the first instance for decision. 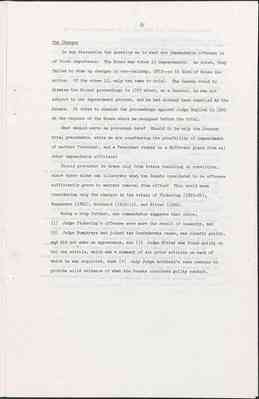 In any discussion the question as to what are impeachable offenses is of first importance. The House has voted 13 impeachments. As noted, they failed to draw up charges in one--Delahey,1873--so it died of House inaction.Of the other 12, only ten came to trial. The Senate voted to dismiss the Blount proceedings in 1797 since, as a Senator, he was not subject to the impeachment process, and he had already been expelled by the Senate. It voted to dismiss the proceedings against Judge English in 1922 at the request ofthe House since he resigned before the trial.

What should serve as precedent here? Should it be only the Johnson tril precedents, since we are considering the possibility of impeachment of another President, and a President stands on a different plane from all other impeachable officials?

Should precedent be drawn only from trials resulting in conviction, since these alone can illustrate what the Senate considered to be offenses sufficiently grave to warrant removal from office? This would mean considering only the charges in the trials of Pickering (1803-04), Humphreys (1862), Archbald (1912-13), and Ritter (1936).

Going a step further, one commentator suggests that since; (1) Judge Pickering's offenses were more the result of insanity, and (2) Judge Humphreys had joined the Confederate cause, was clearly guilty, and did not make an appearance, and (3) Judge Ritter was found guilty on but one article, which was a summary of six prior articles on each of which he was acquitted, that (4) only judge Archbald's case remains to provide solid evidence of what the Senate considers guilty conduct.