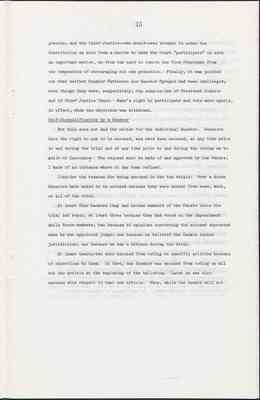 preside, and the Chief Justice--who would--was brought in under the Constitution as much from a desire to have the Court "participate" in such an important matter, as from the need to remove the Vice President from the temptation of encouraging his own promotion. Finally, it was pointed out that neither Senator Patterson nor Senator Sprague had been challenged, even though they were, respectively, the sons-in-law of President Johnson and of chief Justice Chase. Wade's right to participate and vote were upheld, in effect, when the objection was withdrawn.

Consider the reasons for being excused in the ten trials: Over a dozen Senators have asked to be excused because they were absent from some, much, or all of the trial. 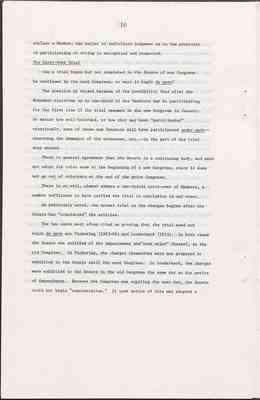 exclude a Member, the matter of individual judgment as to the propriety of participating or voting is recognized and respected.

Can a trial begun but not completed in the Senate of one Congress be continued in the next Congress, or must it begin de novo?

The question is raised because of the possibility that after the November elections up to one-third of the Senators may be participating for the first time if the trial resumes in the new Congress in January. No matter how well-informed, or how they may have "participated" vicariously, none of these new Senators will have participated under oath-- observing the demeanor of the witnesses, etc.--in the part of the trial they missed.

There is general agreement that the Senate is a continuing body, and need not adopt its rules anew at the beginning of a new Congress, since it does not go out of existence at the end of the prior Congress.

There is as well, almost always a two-thirds carry-over of Members, a number sufficient to have carried the trial to conclusion in any event.

As previously noted, the actual trial on the charges begins after the Senate has "considered" the articles.

The two cases most often cited as proving that the trial need not begin de novo are Pickering (1803-04) and Louderback(1933). In both cases the Senate was notified of the impeachment and "took order" thereof, in the old Congress. In Pickering, the charges themselves were not prepared or exhibited to the Senate until the next Congress. In Louderback, the charges were exhibited to the Senate in the old Congress the same day as the notice of impeachment. Because the Congress was expriring the next day, the Senate could not begin "consideration." It took notice of this and adopted a 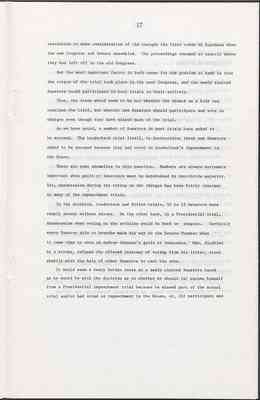 resolution to make consideration of the charges the first order of business when the new Congress and Senate assembled. The proceedings resumed at exactly where they had left off in the old Congress.

But the most important factor in both cases for the problem at hand is that the corpus of the trial took place in the next Congress, and the newly elected Senators could participate in both trials in their entirety.

Thus, the issue would seem to be not whether the Senate as a body can continue the trial, but whether new Senators should participate and vote on charges even though they have missed much of the trial.

There are some anomalies in this question. Numbers are always extremely important when guilt or innocence must be determined by two-thirds majority. Yet, absenteeism during the voting on the charges has been fairly constant in many of the impeachment trials.

In the Archbald, Louderback and Ritter trials, 10 to 15 senators were simply absent without excuse. On the other hand, in a Presidential trial, absenteeism when voting on the articles would be hard to imagine. Certainly every Senator able to breathe made his way to the Senate Chamber when it came time to vote on Andrew Johnson's guilt or innocence. One, disabled by a stroke, refused the offered courtesy of voting from his litter, stood shakily with the help of other Senators to cast his vote.

It would seem a heavy burden rests on a newly elected Senators faced as he would be with the decision as to whether he should (a) excuse himself from a presidential impeachment trial because he missed bart of the actual trial and/or had voted on impeachment in the House, or, (b) participate and 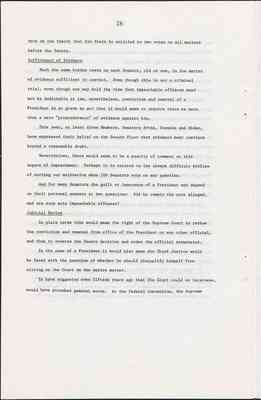 18 vote on the theory that his State is entitled to two votes on all matters before the Senate.

Much the same burden rests on each Senator, old or new, in the matter of evidence sufficient to convict. Even though this is not a criminal trial, even though one may hold the view that impeachable offences need not be indictable at law, nevertheless, conviction and removal of a President is so grave an act that it would seem to require there be more than a reasonable doubt.

Nevertheless, there would seem to be a paucity of comment on this aspect of impeachment. Perhaps it is related to the always difficult problem of sorting out motivation when 100 Senators vote on any question.

And for many Senators the guilt or innocence of a President may depend on their personal answers to two questions: Did he commit the acts alleged, and are such acts impeachable offences?

In plain terms this would mean the right of the Supreme Court to review the conviction and removal from office of the President or any other official, and thus to reverse the Senate decision and order the official reinstated.

In case of a President it would also mean the Chief Justice would be faced with the question of whether he should disqualify himself from sitting on the Court on the entire matter.

Tho have suggested even fifteen years ago that the Court could so intervene, would have provoked general scorn. At the Federal Convention, the Supreme 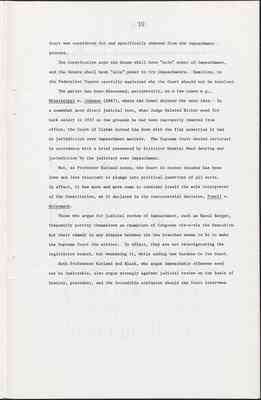 Court was considered for and specifically removed from the impeachment process.

The matter has been discussed, peripherally, in a few cases e.g., Mississippi v. Johnson (1867), where the court adjured the very idea. In a somewhat more direct judicial test, when Judge Halsted Ritter sued for back salary in 1937 on the grounds he had been improperly removed from office, the Court of Claims turned him down with the flat assertion it had no jurisdiction over impeachment matters. The Supreme Court denied certorari in accordance with a brief presented by Soliciter General Reed denying any jurisdiction by the judiciary over impeachment.

But, as Professor Kurland notes, the Court in recent decades has been less and less reluctant to plunge into political questions of all sorts. In effect, it has more and more come to comsider itself the sole interpreter of the Constitution, as it declared in the controversial decision, Powell v. McCormack.

Those who argue for judicial review of impeachment, such as Raol Berger, frequently portray themselves as champions of Congress vis-a-vis the Executive But their remedy in any dispute between the two branches seems to be to make the Supreme Court the arbiter. In effect, they are not reinvigorating the legislative branch, but weakening it, while adding new burdens to the Court.

Both Professors Kurland and Black, who argue impeachable offenses need not be indictable, also argue strongly against judicial review on the basis of history, precedent, and the incredible confusion should the Court intervene.