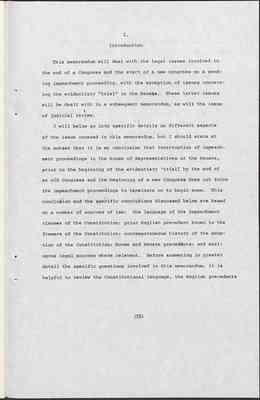 This memorandum will deal with the legal issues involved in the end of a Congress and the start of a new Congress on a pendING impeachment proceeding, with the exception of issues concerning the evidentiary "trial" in the Senate. These latter issues will be dealt with in a subsequent memorandum, as will the issue of judicial review. I will below go into specific details on different aspects of the issue covered in this memorandum, but I should state at the outset that it is my conclusion that interruption of impeachment proceedings in the House of Representatives or the Senate, prior to the beginning of the evidentiary "trial," by the end of an old Congress and the beginning of a new Congress does not force the impeachment proceedings to terminate or to begin anew. This conclusion and the specific conclusions discussed below are based on a number of sources of law: the language of the Impeachment clauses of the Constitution; prior English precedent known to the framers of the Constitution; contemporaneous history of the adoption of the Constitution; House and Senate precedents; and analogous legal sources where relevant. Before answering in greater detail the specific questions involved in this memorandum, it is helpful to review the Constitutional language, the English precedents

Last edit 12 days ago by JBrown 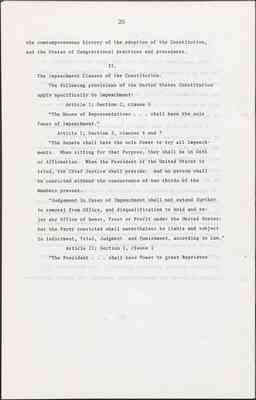 the contemporaneous history of the adoption of the Constitution, and the Status of Congressional practices and precedents.

The Impeachment Clauses of the Constitution. The following provisions of the United States Constitution apply specifically to impeachment: Article I; Section 2, clause 5 "The House of Representatives . . . shall have the sole Power of Impeachment." Article I; Section 3, clauses 6 and 7 "The Senate shall have the sole Power to try all Impeachments. When sitting for that Purpose, they shall be in Oath or Affirmation. When the President of the United States is tried, the Chief Justice shall preside: And no person shall be convicted without the concurrence of two thirds of the Members present. "Judgement in Cases of Impeachment shall not extend further to removal from Office, and disqualification to hold and enjoy any Office of honor, Trust or Profit under the United States: but the Party convicted shall nevertheless be liable and subject to Indictment, Trial, Judgment and Punishment, according to Law." Article II; Section 2, clause 1 "The President . . . shall have Power to grant Reprieves

Last edit 12 days ago by JBrown 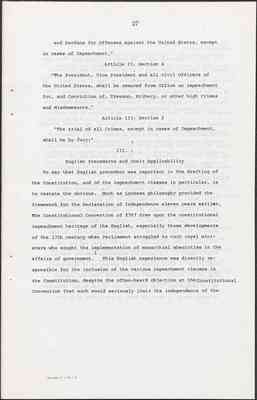 and Pardons for Offenses against the United States, except in cases of Impeachment."

"The President, Vice President and all civil officers of the United States, shall be removed from Office on Impeachment for, and Conviction of, Treason, Bribery, or other high Crimes and Misdemeanors."

Article III; Section 2 "The trial of all Crimes, except in cases of Impeachment, shall be by Jury;"

English Precedents and their Applicability

To say that English precedent was important in the drafting of the Constitution, and of the impeachment clauses in particular, is to restate the obvious. Much as Lockean philosophy provided the framework for the Declaration of Independence eleven years earlier, the Constitutional Convention of 1787 drew upon the constitutional impeachment heritge of the English, especially those developments of the 17th century when Parliament struggled to curb royal ministers who sought the implementation of monarchial absolutism in the affairs of government.1 This English experience was directly responsible for the inclusion of the various impeachment clauses in the Constitution, despite the often-heard objection at the Constitutional Convention that such would seriously limit the independence of the

Last edit 11 days ago by JBrown 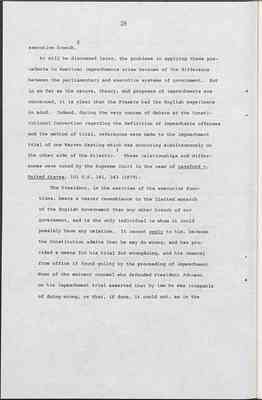 executive branch.2 As will be discussed later, the problem in applying these precedents to American impeachments arise because of the difference between the parliamentary and executive systems of government. But in so far as the nature, theory, and purposes of impeachments are concerned, it is clear that the Framers had the English experience in mind. Indeed, during the very course of debate that the Constitutional Convention regarding the definition of impeachable offenses and the method of tiral, references were made to the impeachment trial of on Warren Hasting wihch was occurring simultaneously on the other side of the Atlantic.3 These relationships and differences were noted by the Supreme Court in the case of Lanqford v. United States, 101 U.S. 341, 343 (1879):

The President, in exercise of the executive functions, bears a nearer resemblance to the limited monarch of the English Government than any other branch of our government, and is the only individual to whom it could possibly have any relation. It cannot apply to him, because the Constitution admits that he may do wrong, and has provided a means for his trial for wrongdoing, and his removal from office if found guilty by the proceeding of impeachment. None of the eminent counsel who defended President Johnson on his impeachment trial asserted that by law he was incapable of doing wrong, or that, if done, it could not, as in the

Last edit 11 days ago by JBrown 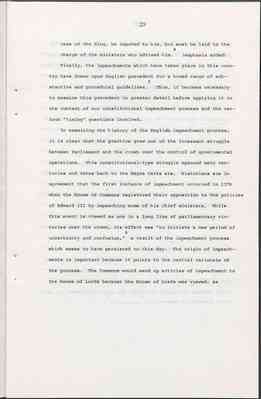 case of the King, be imputed to him, but must be laid to the charge of the ministers who advised him.4 (emphasis added) Finally, the impeachments which have taken place in this country have drawn upon English precedent for a broad range of substantive and procedural guidelines.5 Thus, it becomes necessary to examine this precedent in greater detail before applying it in the context of our constitutional impeachment process and the various "timing" questions involved. In examining the history of the English impeachment process, it is clear that the practice grew out of the incessant struggle between Parliament and the crown over the control of governmental operations. This constitutional-type struggle spanned many centuries and dates back to the Magna Carta era. Historians are in agreement that the first instance of impeachment occurred in 1376 when the House of Commons registered their opposition to the policies of Edward III by impeaching some of his chief ministers. While this event is viewed as one in a long line of parliamentary victories over the crown, its effect was "to initiate a new period of uncertainty and confusion,"6 a result of the impeachment process which seems to have persisted to this day. The origin of impeachments is important because it points to the central rationale of the process. The Commons would send up articles of impeachment to the House of Lords because the House of Lords was viewed, as