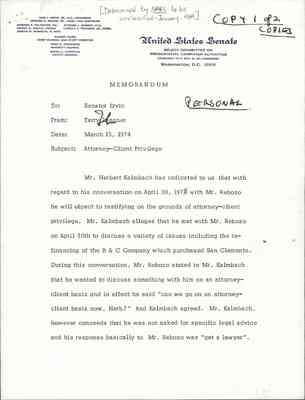 [Determined by NARS to be unclassified - January, 1984]

Mr. Herbert Kalmbach has indicated to us that with regard to his conversation on April 30, 1973 with Mr. Rebozo he will object to testifying on the grounds of attorney-client priviledge. Mr. Kalmbach alleges that he met with Mr. Rebozo on April 30th to discuss a variety of issues including the refinancing of the B & C Company which purchased San Clemente. During this conversation, Mr. Rebozo stated to Mr. Kalmbach that he wanted to discuss something with him on an attorney- client basis and in effect he said "can we go on an attorney- client basis now, Herb?" And Kalmbach agreed. Mr. Kalmbach, however conceeds that he was not asked for specific legal advice and his response basically to Mr. Rebozo was "get a lawyer". 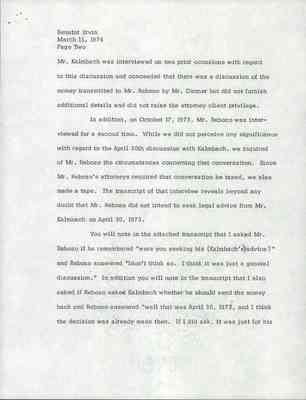 Mr. Kalmbach was interviewed on two prior occasions with regard to this discussion and conceeded that there was a discussion of the money transmitted to Mr. Rebozo by Mr. Danner but did not furnish additional details and did not raise the attorney client privilege.

In addition, on October 17, 1973, Mr. Rebozo was interviewed for a second time. While we did not percieve any significance with regard to the April 30th discussion with Kalmbach, we inquired of Mr. Rebozo the circumstances concerning that conversation. Since Mr. Rebozo's attorneys required that conversation be taped, we also made a tape. The transcript of that interview reveals beyond any doubt that Mr. Rebozo did not intend to seek legal advice from Mr. Kalmbach on April 30, 1973.

You will note in the attached transcript that I asked Mr. Rebozo if he remembered "were you seeking his (Kalmbach's) advice?" and Rebozo answered "Idon't think so. I think it was just a general discussion." In addition you will note in the transcript that I also asked if Rebozo asked Kalmbach whether he should send the money back and Rebozo answered "well that was April 30, 1973, and I think the decision was already made then. If I did ask, it was just for his 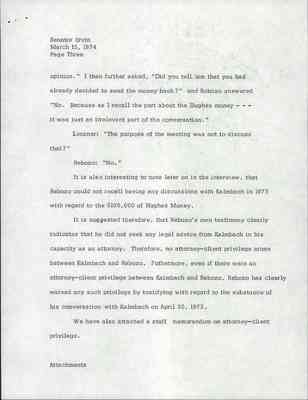 opinion." I then further asked, "Did you tell him that you had already decided to send the money back?" and Rebozo answered "No. Because as I recall the part about the Hughes money - - - it was just an irrelevant part of the conversation."

Lenzner: "The purpose of the meeting was not to discuss that?"

It is also interesting to note later on in the interview, that Rebozo could not recall having any discussions with Kalmbach in 1973 with regard to the $100,000 of Hughes Money.

It is suggested therefore, that Rebozo's own testimony clearly indicates that he did not seek any legal advice from Kalmback in his capacity as an attorney. Therefore, no attorney-client privilege arose between Kalmback and Rebozo. Furthermore, even if there were an attorney-client privilege between Kalmbach and Rebozo, Rebozo has clearly waived any such privilege by testifying with regard to the substance of his conversation with Kalmbach on April 30, 1973.

We have also attached a staff memorandum on attorney-client privilege. 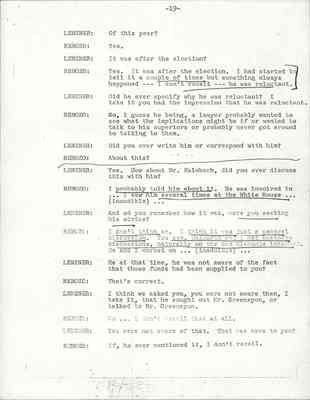 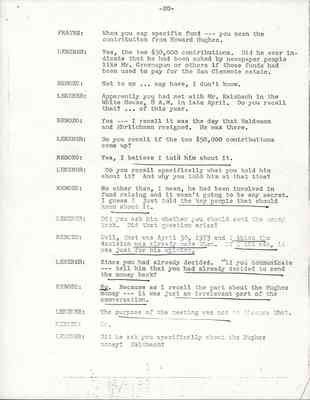