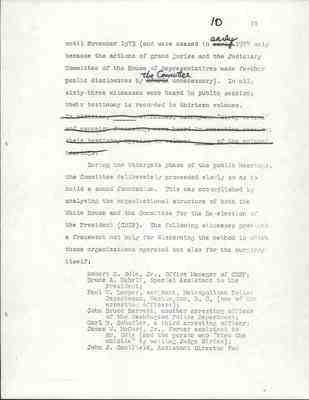 until November 1973 (and were ceased in early 1974 only because of actions of grand juries and the Judiciary Committee of the House of Representatives made further public disclosures by [strikethrough "SCOPCA" insert "the Committee"] unnecessary). In all, sixty-three witnesses were heard in public session; their testimony is recorded in thirteen volumes. [strikethrough " In addition, _____ witnesses, mainly on "dirty tricks" and campaign financing, were heard in executive session; their testimony appears in volume ___ of the printed hearings."]

During the Watergate phase of the public hearings, the Committee deliberately proceeded slowly so as to build a solid foundation. This was accomplished by analyzing the organizational structure of both the White House and the Committee for the Re-election of the President (CREP). The following witnesses provided a framework not only for discerning the method in which those organizations operated but also for the burglary itself: 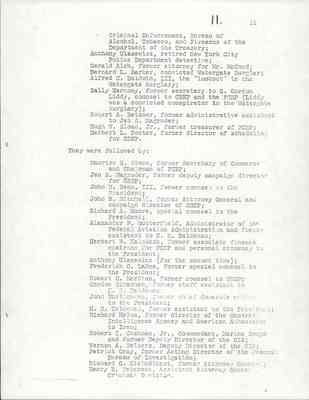 They were followed by: 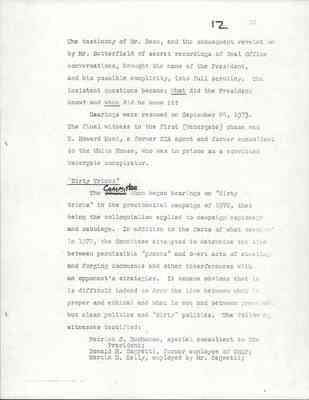 The testimony of Mr. Dean, and the subsequent revelation by Mr. Butterfield of secret recordings of Oval Office conversations, brought the name of the President, and his possible complicity, into full scrutiny. the insistent questions became: What did the President know? and when did he know it?

Hearings were resumed on September 24, 1973. The final witness in the first (Watergate) phase was E. Howard Hunt, a former CIA agent and former consultant to the White House, who was in prison as a convicted Watergate Conspirator.

The [strikethrough "SCOPCA" insert "Committee"] then began hearings on "dirty tricks" in the presidential campaign of 1972, that being the colloquialism applied to campaign espionage and sabotage. In addition to the facts of what occurred in 1972, the Committee attempted to determine the line between permissible "pranks" and overt acts of stealing and forging documents and other interferences with an opponent's strategies. It became obvious that it is difficult indeed to draw the line between what is proper and ethical and what is not and between practical but clean politics and "dirty" politics. The following witnesses testified: 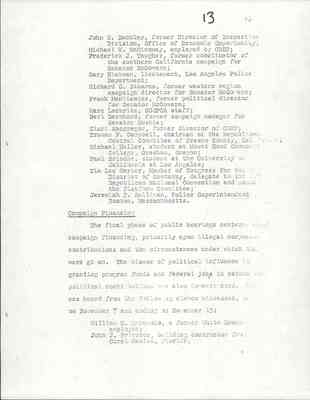 The final phase of public hearings centered on campaign financing, primarily upon illegal corporate contributions and the circumstances under which they were given. The misuse of political influence in granting program funds and federal jobs in return for political contributions was also investigated. Testimony was heard from the following eleven witnesses, beginning on November 7 and ending on November 15: 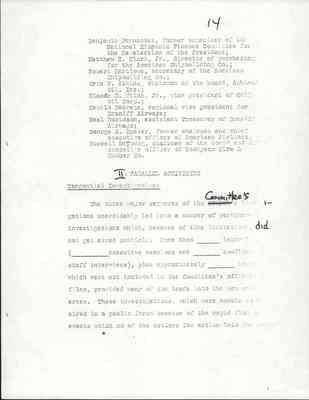 The three major segments of the [strikethrough "SCOPCA's" insert "Committee's"] investigations unavoidably led into a number of peripheral investigations which, because of time limitations, [handwritten "did"] not get aired publicly. More than ____ interviews (_____ executive sessions and _____ confidential staff interviews), plus approximately _____ interviews which were not included in the Committee's official files, provided many of the leads into the new subject areas. These investigations, which were unable to be aired in a public forum because of the rapid flow of events which moved the centers for action into the [illegible co...?] 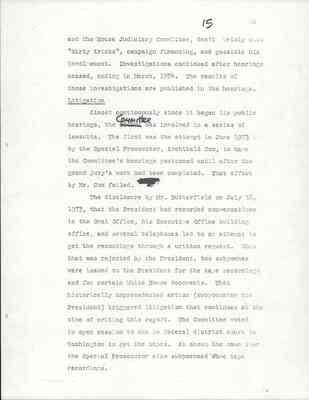 and the House Judiciary Committee, dealt mainly with 'dirty tricks", campaign financing, and possible CIA involvement. Investigations continued after hearings ceased, ending in March, 1974. The results of those investigations are published in the hearings.

Almost continuously since it began its public hearings, the [strikethrough "SCOPCA" insert "Committee"] was involved in a series of lawsuits. The first was the attempt in Jun 1973 by the Special Prosecutor, Archibald Cox, to have the Committee's hearings postponed until after the grand jury's work had been completed. That effort by Mr. Cox failed. [handwritten note illegible, scratched over]

The disclosure by Mr. Butterfield on July 16, 1973, that the President had recorded conversations in the Oval Office, his Executive Office building office, and several telephones led to an attempt to get the recordings through a written request. When that was rejected by the President, two subpoenas were issued to the President for the tape recordings and for certain White House documents. That historically unprecedented action (subpoenaing the President) triggered litigation that continues at the time of writing this report. The Committee voted in open session to sue in federal district court in Washington to get the tapes. At about the same time the Special Prosecutor also subpoenaed some tape recordings. 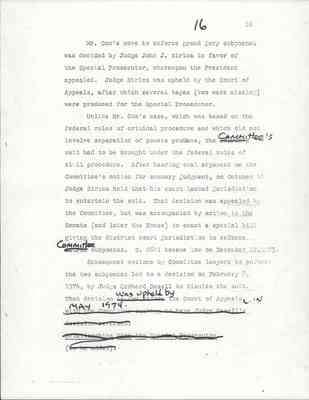 Unlike Mr. Cox's case, which was based on the federal rules of criminal procedure and which did not involve separate of powers problems, the [strikethrough "SCOPCA's" insert "Committee's"] suit had to be brought under the federal rules of civil procedure. After hearing oral argument on the Committee's motion for summary judgment, on October 14 Judge Sirica held that his court lacked jurisdiction to entertain the suit. That decision was appealed by the Committee, but was accompanied by action in the Senate (and later the House) to enact a special bill giving the district court jurisdiction to enforce [strikethrough "SCOPCA" insert "Committee"] subpoenas. S. 2641 became law on December 17, 1973.

Subsequent motions by Committee lawyers to enforce the two subpoenas led to a decision on February 8, 1974, by Judge Gerhard Gesell to dismiss the suit. That decision [strikethrough "is now before" insert "was upheld by"] the Court of Appeals [insert ", in May 1974."] [strikethrough "with the Committee seeking to have Judge Gesell's decision reversed. Relationships with the Special Prosecutor (To be added):"] 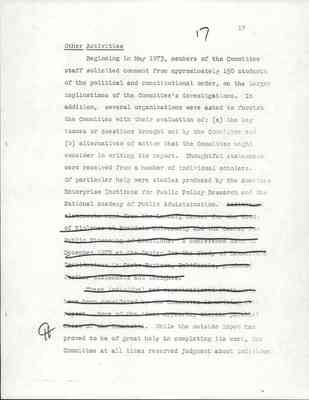 Beginning in May 1973, members of the Committee staff solicited comment from approximately 150 students of the political and constitutional order, on the larger implications of the Committee's investigations. In addition, several organizations were asked to furnish the Committee with their evaluation of: (a) the key issues or questions brought out by the Committee and (b) alternatives of action that the Committee might consider in writing its report. Thoughtful statements were received from a number of individual scholars. Of particular help were studies produced by the American Enterprise Institute for Public Policy Research and the National Academy of Public Administration. {strikethrough " Additional statements came from the Lemberg Center for the Study of Violence at Brandeis University and the Center for Public Financing of Elections. A conference held in December 1973 at the Center for the Study of Democratic Institutions in Santa Barbara, California, produced further statements and insights.

These individuals and organizational statements have been considered by the Committee in writing this report. Some of the ideas appearing therein parallel those of the Committee."] While the outside input has proved to be of great help in completing its work, the Committee at all times reserved judgment about individual 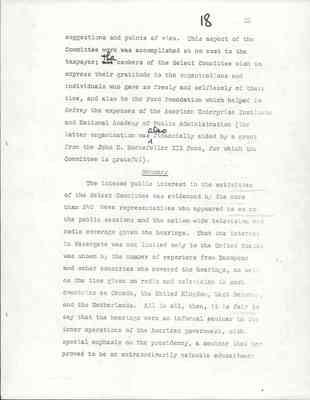 suggestions and points of view. This aspect of the Committee work was accomplished at no cost to the taxpayer; [strikethrough "all" insert "the"] members of the Select Committee wish to express their gratitude to the organizations and individuals who gave so freely and selflessly of their time, and also to the Ford Foundation which helped to defray the expenses of the American Enterprise Institute and National Academy of Public Administration (the latter organization was [insert "also"] financially aided by a grant from the John D. Rockefeller III Fund, for which the Committee is grateful).

The intense public interest in the activities of the Select Committee was evidenced by the more than 240 news representatives who appeared to cover the public sessions and the nation-wide television and radio coverage given the hearings. That the interest in Watergate was not limited only to the United States was shown by the number of reporters from European and other countries who covered the hearings, as well as the time given on radio and television in such countries as Canada, the United Kingdom, West Germany, and the Netherlands. All in all, then, it is fair to say that the hearings were an informal seminar in the inner operations of the American government, with special emphasis on the presidency, a seminar that has proved to be an extraordinarily valuable educational 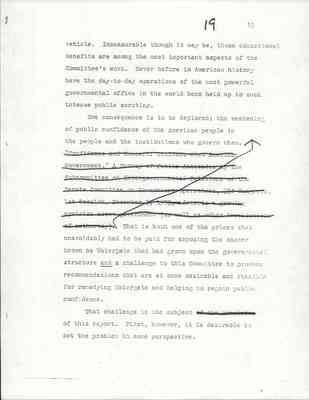 vehicle. Immeasurable though it may be, those educational benefits are among the most important aspects of the Committee's work. Never before in American history have the day-to-day operations of the most powerful governmental office in the world been held up to such intense public scrutiny.

One consequence is to be deplored: the weakening of public confidence of the American people in the people and the institutions who govern them. [strikethrough ""Confidence and Concern: Citizens View American Government," A Survey of Public Attitudes by the Subcommittee on Intergovernmental Relations of the Senate Committee on Government Operations, 93d Congress, 1st Session, December 3, 1973, detects a growing cynicism about government (as well as other institutions of authority.)"] That is both one of the prices that unavoidably had to be paid for exposing the cancer known as Watergate that had grown upon the governmental structure and a challenge to this Committee to produce recommendations that are at once desirable and feasible for remedying Watergate and helping to regain public confidence.

That challenge is the subject [strikethrough "of the remainder"] of this report. First, however, it is desirable to set the problem in some perspective.