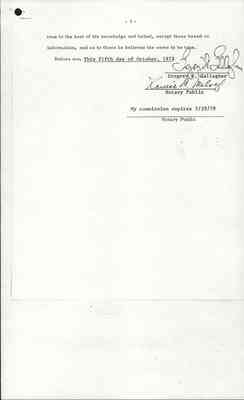 true to the best of his knowledge and belief, except those based on information, and as to those he believes the same to be true.

Last edit about 1 month ago by charlie_chapman 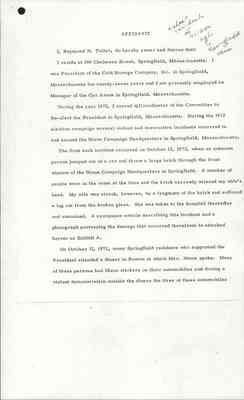 I, Raymond N. Tuller, do hearby swear and depose that:

The first such indicent occurred on October 13, 1972, when an unknown person jumped out of a car and threw a large brick through the front window of the Nixon Campaign Headquarters in Springfield. A number of people were in the room at the time and the brick narrowly missed my wife's head. My wife was struck, however, by a fragement of the brick and suffered a leg cut from the broken glass. She was taken to the hospital thereafter and examined. A newspaper article describing this incident and a photograph portraying the damage that occurred therefrom is attached hereto as Exhibit A.

On October 31, 1972, many Springfield residents who supported the President attended a dinner in Boston at which Mrs. Nixon spoke. Many of these persons had Nixon stickers on their automobiles and during a violent demonstration outside the dinner the tires of these automobiles

Last edit about 1 month ago by charlie_chapman 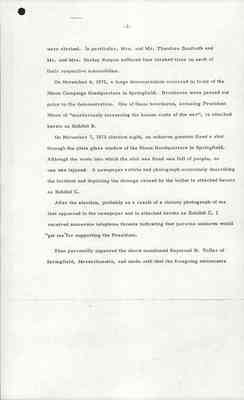 were slashed. In particular, Mrs. and Mr. Theodore Banforth and Mr. and Mrs. Harley Runyon suffered four slashed tires on each of their respective automobiles.

On November 4, 1972, a large demonstration occurred in front of the Nixon Campaign Headquarters in Springfield. Brochures were passed out prior to the demonstration. One of these brochures, accusing President Nixon of "murderously increasing the human costs of the war", is attached hereto as Exhibit B.

On November 7, 1972 election night, an unknown gunman fired a shot through the plate glass window of the Nixon Headquarters in Springfield. Although the room into which the shot was fired was full of people, no one was injured. A newspaper article and photograph accurately describing the incident and depicting the damage caused by the bullet is attached hereto as Exhibit C.

After the election, probably as a result of a victory photograph of me that appeared in the newspaper and is attached hereto as Exhibit C, I received numerous telephone threats indicating that persons unknown would "get me" for supporting the President.

Then personally appeared the above mentioned Raymond N. Tuller of Springfield, Massachusetts, and made oath that the foregoing statements

Last edit 26 days ago by Jannyp 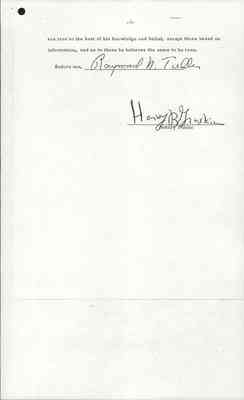 are true to the best of his knowledge and belief, except those based on information, and as to those he believes the same to be true.

Before me, Raymond N. Tully

Last edit 26 days ago by Jannyp 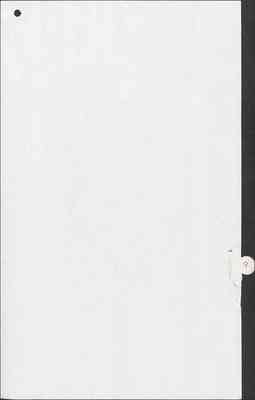