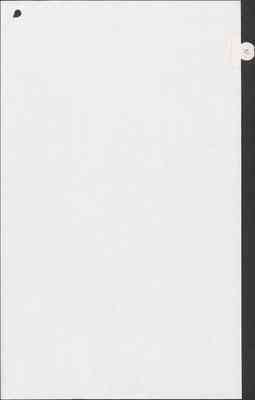 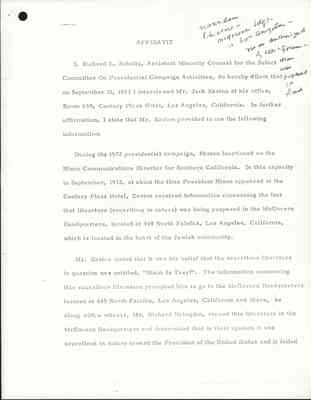 I, Richard L. Schultz, Assistant Minority Counsel for the Select Committee On Presidential Campaign Activities, do hereby affirm that on September 21, 1973 I interviewed Mr. Jack Easton at his office, Room 659, Century Plaza Hotel, Los Angeles, California. In further affirmation, I state that Mr. Easton provided to me the following information:

During the 1972 presidential campaign, Easton functioned as the Nixon Communications Director for Southern California. In this capacity in September, 1972, at about the time President Nixon appeared a the Century Plaza Hotel, Easton received information concerning the fact that literature (scurrilous in nature) was being prepared in the McGovern Headquarters, located at 449 North Fairfax, Los Angeles, California, which is located in the heart of the Jewish community.

Mr. Easton stated that it was his belief that the scurrilous literature in question was entitled, "Nixon is Treyf". The information concerning this scurrilous literature prompted him to go to the McGovern Headquarters located at 449 North Fairfax, Los Angeles, California and there, he along with a witness, Mr. Richard Nahagian, viewed this literature in the McGovern Headquarters and determined that in their opinion it was scurrilous in nature toward the President of the United States and it failed

Last edit 15 days ago by englishmaj 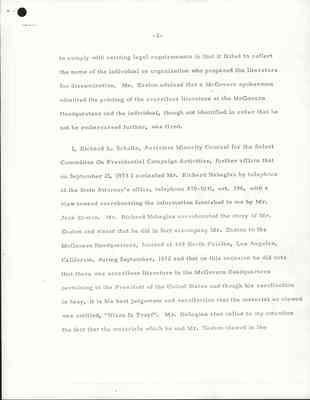 to comply with existing legal requirements in that it failed to reflect the name of the individual or organization who prepared the literature for dissemination. Mr. Easton advised that a McGovern spokesman admitted the printing of the scurrilous literature at the McGovern Headquarters and the individual, though not identified in order that he not be embarrassed further, was fired.

I, Richard L. Schultz, Assistant Minority Counsel for the Select Committee On Presidential Campaign Activities, further affirm that on September 21, 1973 I contacted Mr. Richard Nahigian by telephone at the State Attorney's office, telephone 870-0131, ext. 396, with a view toward corroborating the information furnished to me by Mr. Jack Easton. Mr. Richard Nahigian corroborated the story of Mr. Easton and stated that he did in fact accompany Mr. Easton to the McGovern Headquarters, located at 449 North Fairfax, Los Angeles, California, during September, 1972 and that on this occasion he did note that there was scurrilous literature in the McGovern Headquarters pertaining to the President of the United States and though his recollection is hazy, it is his best judgement and recollection that the material so viewed was entitled, "Nixon Is Treyf". Mr Nahagian also called to my attention the fact that the materials which he and Mr. Easton viewed in the 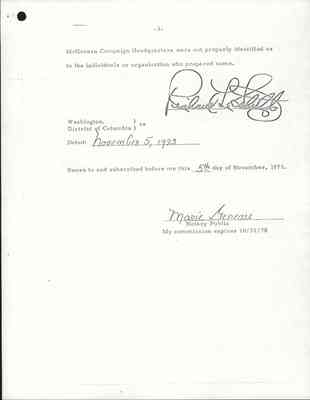 McGovern Campaign Headquarters were not properly identified as to the individuals or organization who prepared same.

Sworn to and subscribed before me this 5th day of November, 1973. 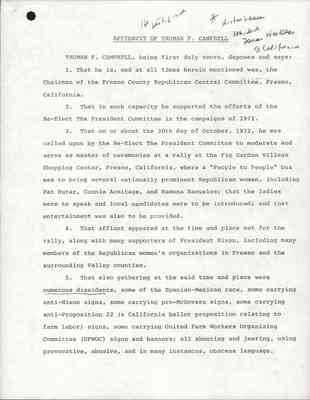 TRUMAN F. CAMPBELL, being first duly sworn, deposes and says: 1. That he is, and at all times herein mentioned was, the Chairman of the Fresno County Republican Central Committee, Fresno, California.

2. That in such capacity he supported the efforts of the Re-Elect The President Committee in the campaigns of 1972.

3. That on or about the 30th day of October, 1972, he was called upon by the Re-Elect The President Committee to moderate and serve as master of ceremonies at a rally at the Fig Garden Village Shopping Center, Fresno, California, where a "People to People" bus was to bring several nationally prominent Republican women, including Pat Hutar, Connie Armitage, and Ramona Banuelos; that the ladies were to speak and local candidates were to be introduced; and that entertainment was also to be provided.

4. That affiant appeared at the time and place set for the rally, along with many supporters of President Nixon, including many members of the Republican women's organizations in Fresno and the surrounding Valley counties.