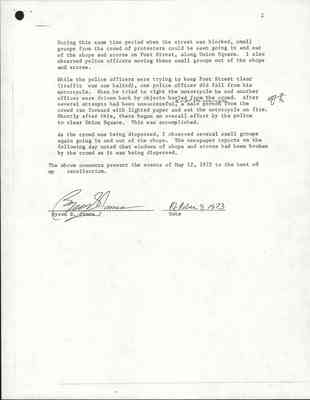 While the police officers were trying to keep Post Street clear (traffic was now halted), one police officer did fall from his motorcycle. When he tried to right the motorcycle he and another officer were driven back by objects hurled from the crowd. After several attempts had been unsuccessful [to right the motorcycle], a male person from the crowd ran forward with lighted paper and set the motorcycle on fire. Shortly after this, there began an overall effort by the police to clear Union Square. This was accomplished.

The above comments present the event of May 12, 1972 to the best of my recollection. 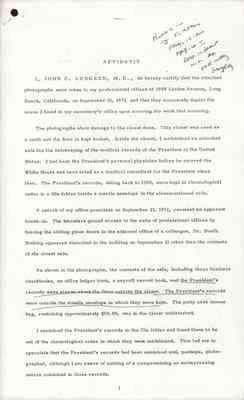 (Break in of Nixon's physician's office -- coincident with an ordinary burglary)

I, JOHN C. LUNGREN, M. D., do hereby certify that the attached photographs were taken in my professional offices at 2898 Linden Avenue, Long Beach, California, on September 21, 1972, and that they accurately depict the scene I found in my secretary's office upon arriving for work that morning.

The photographs show damage to the closet door. This closet was used as a vault and the door is kept locked. Inside the closet, I maintained an unlocked safe for the safekeeping of the medical records of the President of the United States. I had been the President's personal physician before he entered the White House and have acted as a medical consultant for the President since then. The President's records, dating back to 1960, were kept in chronological order in a file folder inside a manila envelope in the aforementioned safe.

A search of my office premises on September 21, 1972, revealed an apparent break-in. The intruders gained access to the suite of professional offices by forcing the sliding glass doors in the adjacent office of a colleague, Dr. Buell. Nothing appeared disturbed in the building on September 21 other than the contents of the closet safe.

As shown in the photographs, the contents of the safe, including three business checkbooks, an office ledger book, a payroll record book, and the President's records were strewn about the floor outside the closet. The Presiden't records were outside the manila envelope in which they were kept. The petty cash money bag, containing approximately $50.00, was in the closet undisturbed.

I examined the President's records in the file folder and found them to be out of the chronological order in which they were maintained. This led me to speculate that the President's records had been examined, and, perhaps, photographed, although I am aware of nothing of a compromising or embarrassing nature contained in those records.

Last edit 10 days ago by mjmhanson 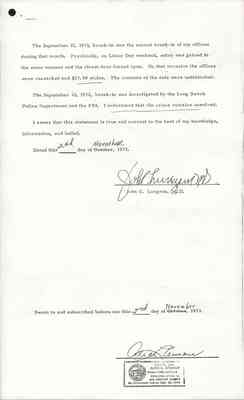 The September 21, 1972, break-in was the second break-in of my offices during that month. Previously, on Labor Day weekend, entry was gained in the same manner and the closet door forced open. On that occasion the offices were ransacked and $27.00 stolen. The contents of the safe were undisturbed.

The September 21, 1972, break-in was investigated by the Long Beach Police Department and the FBI. I understand that the crime remains unsolved.

I swear that this statement is true and correct to the best of my knowledge, information, and belief.

Sworn to and subscribed before me this 2nd day of November, 1973. 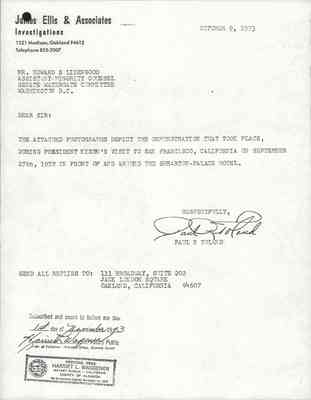 THE ATTACHED PHOTOGRAPHS DEPICT THE DEMONSTRATION THAT TOOK PLACE, DURING PRESIDENT NIXON'S VISIT TO SAN FRANCISCO, CALIFORNIA ON SEPTEMNER 27th, 1972 IN FRONT OF AND AROUND THE SHEATON-PALACE HOTEL.

Subscribed and sworn to before me this 1st day of November 1973 Harriet L. Waggener Notary Public State of California - Prinicpal Office, Alameda County 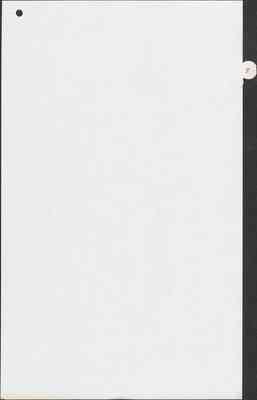