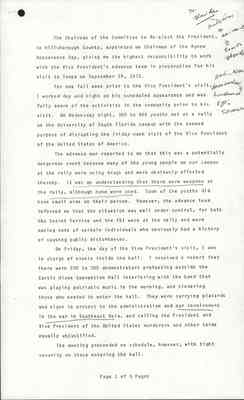 The Chairman of the Committee to Re-elect the President, in Hillsborough County, appointed me Chairman of the Agnew Appearance Day, giving me the highest responsibility to work with the Vice President's advance team in preperation for his visit to Tampa on September 29, 1972.

For one full week prior to the Vice President's visit, I worked day and night on his scheduled appearance and was fully aware of the activities in the community prior to his visit. On Wednesday night, 300 to 400 youths met at a rally on the University of South Florida campus with the avowed purpose of disrupting the Friday noon visit of the Vice President of the United States of America.

The advance men reported to me that this was a potentially dangerous event because many of the young people on our campus at the rally were using drugs and were obviously affected thereby. It was my understanding that there were weapons at the rally, although none were used. Some of the youths did have small arms on their person. However, the advance team informed me that the situation was well under control, for both the Secret Service and the FBI were at the rally and were making note of certain individuals who obviously had a history of causing public disturbances.

On Friday, the day of the Vice President's visit, I was in charge of events inside the hall. I recieved a report that there were 200 to 300 demonstrators protesting outside the Curtis Hixon Convention Hall interfering with the band that was playing patriotic music in the morning, and hindering those who wanted to enter the hall. They were carrying placards and signs in protest to the administration and our involvement in the war in Southeast Asia, and calling the President and Vice President of the United States murderers and other terms equally unjustified.

The meeting proceeded on schedule, however, with tight security on those entering the hall. 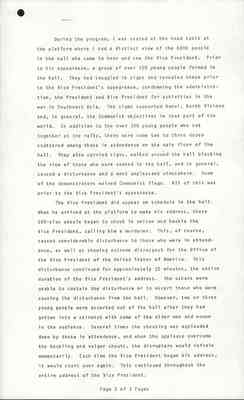 During the program, I was seated at the head table at the platform where I had a distinct view of the 6000 people in the hall who came to hear and see the Vice President. Prior to his appearance, a group of over 100 young people formed in the hall. They had smuggled in signs and revealed these prior to the Vice President's appearance, condemning the administration, the President and Vice President for activities in the war in Southeast Asia. The signs suported Hanoi, North Vietnam and, in general, the Communist objectives in that part of the world. In addition to the over 100 young people who sat together at the rally, there were some two to three dozen scattered among those in attendance on the main floor of the hall. They also carried signs, walked around the hall blocking the view of those who were seated in the hall, and in general, caused a disturbance and a most unpleasant atmosphere. Some of the demonstrators waived Communist flags. All of this was prior to the Vice President's appearance. 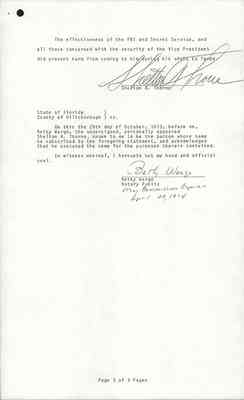 The effectivness of the FBI and Secret Service, and all those concerned with the security of the Vice President did prevent harm from coming to him during his visit to Tampa.

On this the 29th day of October, 1973, before me, Betty Wargo, the undersigned, personally appeared Shelton A. Thorn, known to me to be the person whose name he subscribed to the foregoing statement, and acknowledged that he executed the same for the purposes therein contained.

In witness whereof, I hereunto set my hand and official seal. 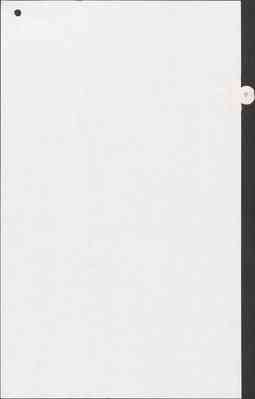 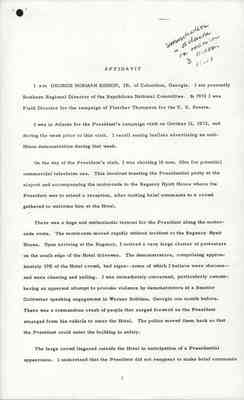 Demonstration in Atlanta on occasion of Nixon's visit

I am GEORGE NORMAN BISHOP, JR. of Columbus, Georgia. I am presently Southern Regional Director of the Republican National Committee. In 1972 I was Field Director for the campaign of Fletcher Thompson for the U. S. Senate.

I was in Atlanta for the Presiden'ts campaign visit on October 12, 1972, and during the week prior to this visit. I recall seeing leaflets advertising an anti-Nixon demonstration during that week.

On the day of the President's visit, I was shooting 16 mm. film for potential commercial television use. This involved meeting the Presidential party at the airport and accompanying the motorcade to the Regency Hyatt House where the President was to attend a reception, after making brief comments to a crowd gathered to welcome him at the Hotel.

There was a huge and enthusiastic turnout for the President along the motorcade route. The motorcade moved rapidly without incident to the Regency Hyatt House. Upon arriving at the Regency, I noticed a very large cluster of protestors on the south edge of the Hotel driveway. The demonstrators, comprising approximately 35% of the Hotel crowd, had signs -- some of which I believe were obscene -- and were chanting and yelling. I was immediately concered, particularly remembering an apparant attempt to provoke violence by demonstrators at a Senator Goldwater speaking engagement in Warner Robbins, Georgia one month before. There was a tremendous crush of people that surged forward as the President emerged from his vehicle to enter the Hotel. The police moved them back so that the President could enter the building in safety.

The large crowd lingered outside the Hotel in anticipation of a Presidential appearence. I understand that the President did not reappear to make brief comments