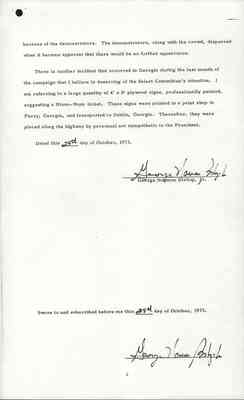 There is a nother incident that occurred in Georgia during the last month of the campaign that I believe is deserving of the Select Committee's attention. I am referring to a large quantity of 4' by 8' plywood signs, professionally painted, suggesting a Nixon-Nunn ticket. These signs were painted in a paint shop in Perry, Georgia, and transported to Dublin, Georgia. Thereafter, they were placed along the highway by personnel not sympathetic to the President.

Sworn to and subscribed before me this 29th day of October, 1973. 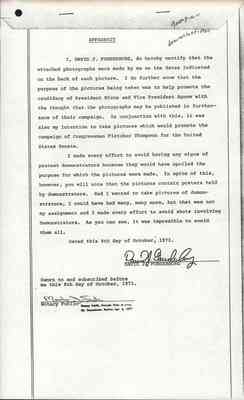 I, DAVID J. FUNDERBURG, do hearby certify that the attached photographs were made by me on the dates indicated on the back of each picture. I do further avow that the purpose of the pitcures being taken was to help promote the candidacy of President Nixon and Vice President Agnew with the thought that the photographs may be published in furtherance of their campaign. In conjunction with this, it was also my intention to take pictues which would promote the campaign of Congressman Fletcher Thompson for the United States Senate.

Sworn to and subscribed before me this 8th day of October, 1973. 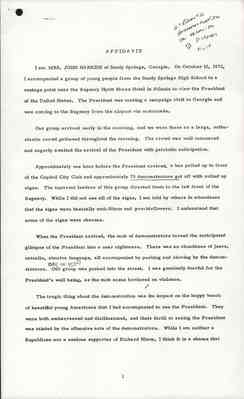 I am MRS. JOHN HARKINS of Sandy Springs, Georgia. On October 12, 1972, I accompanied a group of young people from the Sandy Springs High School to a vantage point near the Regency Hyatt House in Atlanta to view the President of the United States. The President was making a campaign visit to Georgia and was coming to the Regency from the airport via motorcade.

Our group arrived early in the morning, and we were there as a large, enthusiastic crowd gathered throughout the morning. The crowd was well mannered and eagerly awaited the arrival of the President with patriotic anticipation.

Approximately one hour before the President arrived, a buss pulled up in front of the Capitol City Club and approximately 75 demonstrators got off with rolled up signs. The apparent leaders of this group directed them to the left front of the Regency. While I did not see all of the signs, I am told by others in attendance that the signs were basically anti-Nixon and pro-McGovern. I understand that some of the signs were obscene.

When the President arrived, the mob of demonstrators turned the anticipated glimpse of the President into a near nightmare. There was an abundance of jeers, catcalls, abusive language, all accompanied by pushing and shoving by the demonstrators. [On of (MSH)] Our group was pushed into the street. I was genuinely fearful for the President's well being, as the mob scene bordered on violence.

The tragic thing about the demonstration was its impact on the happy bunch of beautiful young Americans that I had accompanied to see the President. They were both embarrassed and disillusioned, and their thrill at seeing the President was tainted by the offensive acts of the demonstrators. While I am neither a Republican nor a zealous supporter of Richard Nixon, I think it is a shame that 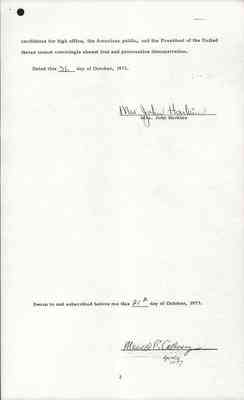 candidates for high office, the American public, and the President of the United States cannot commingle absent foul and provocative demonstration. 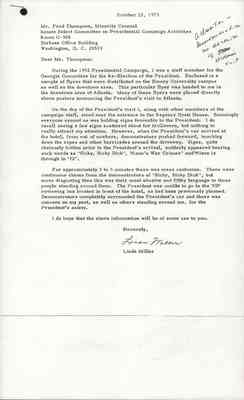 During the 1972 Presidential Campaign, I was a staff member for the Georgia Committee for the Re-Election of the President. Enclosed is a sample of flyers that were distributed on the Emory University campus as well as the downtown area. This particular flyer was hnded to me in the downtown area of Atlanta. Many of these flyers were placed directly above posters announcing the President's visit to Atlanta.

On the day of the President's visit I, along with other members of the campaign staff, stood near the entrance to the Regency Hyatt House. Seemingly, everyone around us was holding signs favorable to the President. I do recall seeing a few signs scattered about for McGovern, but nothing to really attract my attention. However, when the President's car arrived at the hotel, from out of nowhere, demonstrators pushed forward, knocking down the ropes and other barricades around the driveway. Signs. quite obviously hidden prior to the President's arrival, suddenly appeared bearing such words as "Sicky, Sicky Dick", Nixon's War Crimes" and "Nixon is through in '72".

For approximately 3 to 5 minutes there was mass confusion. There were continuous chants from the demonstrators of "Sicky, Sicky Dick", but more disgusting than this was their most abusive and filthy language to those people standing around them. The President was unable to go to the VIP reviewing box located in front of the hotel, as had been previously planned. Demonstrators completely surrounded the President's car and there was concern on my part, as well as others standing around me, for the President's safety.

I do hope that the above information will be of some use to you.