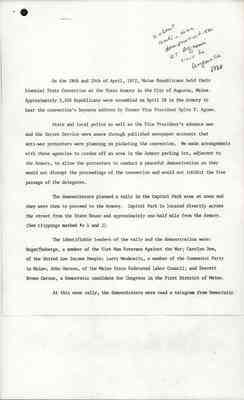 violent anti-war demonstration at Agnew's visit to Augusta ME

On the 28th and 29th of April, 1972, Maine Republicans held thier biennial State Convention at the State Armory in the City of Augusta, Maine. Approximately 3,500 Republicans were assembled on April 28 in the Armory to hear the convention's keynote address by former Vice President Spiro T. Agnew.

State and local police as well as the Vice President's advance men and the Secret Service were aware through published newspaper accounts that anti-war protestors were planning on picketing the convention. We made arrangements with these agencies to cordon off an area in the Armory parking lot, adjacent to the Armory, to allow the protestors to conduct a peaceful demonstration so they would not disrupt the proceedings of the convention and would not inhibit the free passage of the delegates.

The demonstrators planned a rally in the Capitol Park area at noon and they were then to proceed to the Armory. Capitol Park is located directly across the street from the State House and approximately one-half mile from the Armory. (See clippings marked #s 1 and 2).

The identifiable leaders of the rally and the demonstration were: Roger Theberge, a member of the Viet Nam Veterans Against the War; Carolyn Dow, of the United Low Income People; Larry Moskowitz, a member of the Communist Party in Maine; John Hanson, of the Maine State Federated Labor Council; and Everett Brown Carson, a Democratic candidate for Congress in the First District of Maine.

At this noon rally, the demonstrators were read a telegram from Democratic 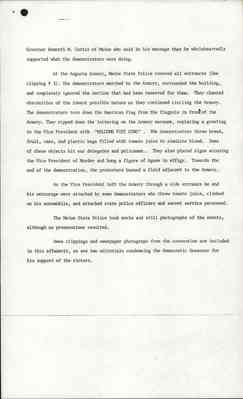 Governor Kenneth M. Curtis of Maine who said in his message that he wholeheartedly supported what the demostrators were doing.

At the Augusta Armory, Maine State Police covered all entrances (See clipping # 3). The demonstrators marched to the Armory, surrounded the building, and completely ignored the section that had been reserved for them. They chanted obscenities of the lowest possible nature as they continued circling the Armory. The demonstrators tore down the American Flag from the flagpole in front of the Armory. They ripped down the lettering on the Armory marquee, replacing a greeting to the Vice President with 'WELCOME VIET CONG'. The demonstrators threw bread, fruit, cans, and plastic bags filled with tomato juice to simulate blood. Some of these objects hit out delegates and policemen. They also placed signs accusing the Vice President of Murder and hung a figure of Agnew in effigy. Towards the end of the demonstration, the protestors burned a field adjacent to the Armory.

As the Vice President left the Armory through a side entrance he and his entourage were attacked by some demonstrators who threw tomato juice, climbed on his automobile, and attacked state police officers and secret service personnel.

The Maine State Police took movie and still photographs of the events, although no no prosecutions resulted.

News clippings and newspaper photographs from the convention are included in this affidavit, as are two editorials condeming the Democratic Governor for his support of the rioters. 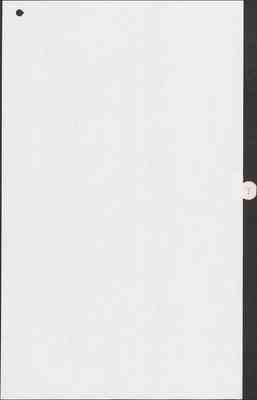 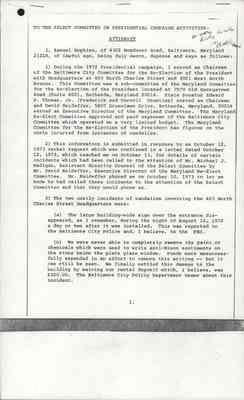 TO THE SELECT COMMITTEE ON PRESIDENTIAL CAMPAIGN ACTIVITIES:

I, Samuel Hopkins, of 4302 Wendover Road, Baltimore, Maryland 21218, of lawful age, being duly sworn, deposes and says as follows:

2) This information is submitted in response to an October 12, 1973 verbal request which was confirmed in a letter dated October 12, 1973, which reached me on October 13, for details of certain incidents which had been called to the attention of Mr. Michael J. Madigan, Assistant Minority Counsel of the Select Committee by Mr. David Neideffer, Executive Director of the Maryland Re-Elect Committee. Mr. Neideffer phoned me on October 10, 1973 to let me know he had called these incident to the attention of the Select Committee and that they would phone me.

3) The two costly incidents of vandalism involving the 403 North Charles Street Headquarters were:

(a) The large building-wide sign over the entrance disappeared, as I remember, during the night of August 12, 1972 a day or two after it was installed. This was reported to the Baltimore City Police and, I believe, to the FBI.

(b) We were never able to completely remove the paint or chemicals which were used to write anti-Nixon sentiments on the stone below the plate glass window. Funds were unsuccessfully expended in an effort to remove this writing -- but it can still be seen. We finally settled this damage to the building by waiving our rental deposit which, I believe, was $300.00. The Baltimore City Police Department knows about this incident. 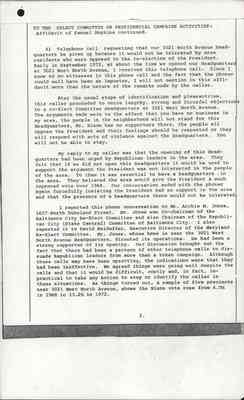 TO THE SELECT COMMITTEE ON PRESIDENTIAL CAMPAIGN ACTIVITIES: Affidavit of Samuel Hopkins continued.

4) Telephone call requesting that our 3021 North Avenue Headquarters be given up because it would not be tolerated by area residents who were opposed to the re-election of the President. Early in September 1972, at about the time we opened our Headquarters at 3021 West North Avenue, I recieved this telephone call. Since I know of no witnesses to this phone call and the fact that the phoner could well have been an imposter, I will not mention in this affidavit more than the nature of the remarks made by the caller.

Ater the usual steps of identification and pleaantries, this caller proceeded to voice lengthy, strong and forceful objections to a re-Elect Committee Headquarters at 3021 West North Avenue. The arguments made were to the effect that you have no business in my area, the people in the neighborhood will not stand for this Headquarters, Mr. Nixon has no supporters there, the people all oppose the President and their feelings should be respected or they will respond with acts of violence against the Headquarters. You will not be able to stay.

I reported this phone conversation to Mr. Archie M. Jones, 1607 North Dukeland Street. Mr. Jones was Co-chairman of the Baltimore City Re-Elect Committee and also Chairman of the Republican City (State Central) Committee of Baltimore City. I also reported it to David Neideffer, Executive Director of the Maryland Re-Elect Committee. Mr. Jones, whose home is near the 3021 West North Avenue Headquarters, directed its operations. He had been a strong supporter of its opening. Our discussion brought out the fact that there had been a pattern of other telephone calls to dissuade Republican leaders from more than a token campaign. Although these calls may have been upsetting, the indications were that they had been ineffective. We agreed things were going well despite the calls and that it would be difficult, costly, and, in fact, impractical to take any action to stop or identify the caller in these situations. As things turned out, a sample of five precincts near 3021 West North Avenue, shows the Nixon vote rose from 4.0% in 1968 to 13.2% in 1972.